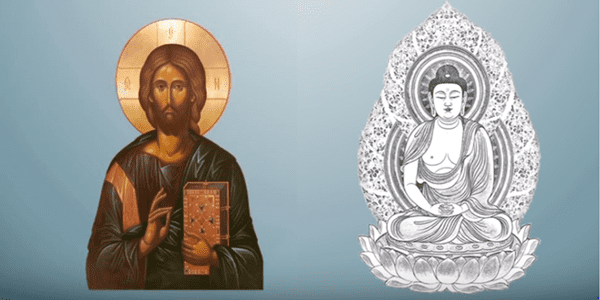 The following is a sermon I preached at Clackamas United Church of Christ, near Portland, Oregon.  You can read or watch the sermon below. The primary scripture text was Mark 10:17-31.

There’s a story about a man named Solomon.

Solomon grew up as a rich prince in the kingdom of Israel. By the time he was a young boy, he inherited great wealth from his father. He threw parties. He had a lot of friends and he had many lovers.

When Solomon became king, he amassed even more wealth. He became an arms dealer and sold weapons to the richest nations. He continued to revel with women. He had many wives and many concubines. He was infamous for his sexual exploits.

Solomon was attached to his ego, wealth, and power and he wanted more and more. Why? Because that’s what kings do. The greatest kings are those who, in comparison with others, have the most wealth, the most weapons, the most power, right?

Well, that’s according to the worldly standard of success and greatness. This is how you make a nation great, right? The leader amasses a bigger ego as he gains more power and prestige. Some of us go along with it because we see ourselves in our political leaders. Our leader is like a mirror to us.

Only the Bible says it’s smoke and mirrors. It’s all fake. It’s a world of lies.

Once a Queen from the land of Sheba came to visit King Solomon. Solomon showed her around his massive palace. He took pride in all his servants. The Queen was impressed by his wealth. She said to him that God had blessed him and made him king so that he could execute justice for his people.[1]

Notice what the Queen of Sheba said. She said Solomon was blessed so that he would bring justice to his people. Now, in the Bible, justice is not primarily about punishing people who do bad things. No, biblical justice is much more about caring for those in need. That’s why the prophets emphasized caring for the poor and those on the margins. Unfortunately, Solomon’s projects gained prosperity and wealth for himself and his friends, but did nothing for the poor.

Solomon story in the Bible is mixed. He is known as the wisest person who has ever lived. According to tradition, he wrote a book called Proverbs, which is full of great wisdom.

But tradition also says that near the end of his life, Solomon wrote a book called Ecclesiastes. In that book, as he looked back on his life, Solomon says that all his wealth, status, and accomplishments were attachments there were meaningless. Those attachments are like vapor that vanishes. All that money he accumulated? Like vapor. All of his power? Like vapor. His ego and status that he gained over other people and even over other kings? That too was like vapor.

But what does lead to a meaningful life? It’s not wealth or power or prestige. It’s relationships of love. It’s living into what the Queen of Sheba recommended – to help make the world a little more loving and just.

Most religious traditions say something similar. Buddhism, for example, tells a similar story to Solomon. There was once a man named Siddhartha Gautama. He was a prince of a very wealthy kingdom. His father wanted to keep him away from the suffering of the world, so he made sure Siddhartha never saw it. Siddhartha grew up in palace luxury. He had wealth and he threw massive parties. His father groomed him to be not just the leader of their kingdom, but to become the emperor of India by conquering other kingdoms and uniting them into one empire.

Like Solomon, in his early life, Siddhartha attached himself to wealth, status, pleasure, and power. But at age 29, he ventured out into the city for the first time with his attendant, where he encountered suffering. First he saw an old man on the side of the road. Siddhartha asked, “What happened to him?” The attendant said, “That’s change. Nobody stays young.”

Then Siddhartha saw a sick man and didn’t understand his condition. His attendant said, “Oh everyone gets sick. Even princes and kings get sick. You will eventually get sick, too.”

Then Siddhartha encountered a corpse. This startled him because he had never seen death before. It was then he realized that suffering, illness, and death are universal. So he began asking how he could deal with his own suffering.

Like Solomon, Siddhartha realized that all of his attachments were meaningless. In the face of suffering, all of his attachments meant nothing. In fact, they just weighed him down. And so he detached from everything – from his wealth and his power and even his family. He went to spiritual masters to learn from them. They told him to become an ascetic and refuse to eat anything but one grain of rice per day. He followed his teachers’ commands but after many years of trying, he realized there was a problem. Not only did he still feel spiritually empty, but now his stomach was empty, too. His rigorous training didn’t lead him into greater wisdom. It just brought another attachment, but this time to daily spiritual rigor.

Then one day, he remembered that as a boy his father took him to a river. He sat by the river with his dad and he had this sense of the perfection of the natural world entering into him. He felt connected to the world and this brought a deep sense of compassion to him, because he realized we’re all in this world of joy and suffering together.

So the Buddha dropped his life of asceticism. He took up what Buddhism calls “the middle way.” He continued a life of detachment toward worldly things. This increased his sense of compassion toward all people and all things. This was the way to enlightenment, the way to Nirvana.

And then there’s the other great spiritual teacher, Jesus, who also shows us what detachment is all about. In our passage today, a rich man comes to Jesus and asks him, “Good teacher, what must I do to inherit eternal life?”

Jesus begins his answer by saying, “Why do you call me good? No one is good by God alone.”

Isn’t that interesting? Jesus said this, but if you were to say it to nearly any Christian today, I suspect you would be accused of blasphemy. So why does Jesus infer that he is not good?

There are probably many reasons, but I suspect one reason is to detach himself from the status of being “good.” Being good is usually a comparison. You know you are good because you can compare yourself with others, whom we label bad. And there can be a competition for not only who is good, but who is the greatest! Jesus resisted this emphasis on status, because like Solomon, he knew it was like vapor.

And what are God’s desires? God’s desires for us are what leads to eternal life. Eternal life has similarities to Buddhism’s teaching on Nirvana. We often think of both terms as things that happen after we die. But actually, Jesus says you don’t have to wait for eternal life. You can have it now.

But the rich man says he has done these things and he still doesn’t feel fulfilled. At this point, Jesus looks on the man with compassion, not with judgment, and says he needs to radically change his life by selling all the stuff he owns and give the money to the poor. The man left grieving, for he had many possessions.

We don’t know the rest of the rich man’s story. Maybe he followed Jesus advice, or maybe he didn’t. What we do know is that having wealth wasn’t the problem. The problem for Solomon, the Buddha, and the rich man was that their attachment to possessions became more important than their care for the poor and the suffering.

I thought about titling this sermon, “How to Preach Like a Hypocrite” because I’m not good at detachment. The person I most identify with in these stories is the rich young man because I have a lot of possessions. But I think my biggest problem is my attachment to prestige and status and success – my ego. Solomon says that those attachments are vain. The Buddha tells me they will lead to suffering. And Jesus tells me that the way to eternal life is to give up those attachments.

And they are all correct. They are all guided by the same Spirit. And here’s the thing about Buddhism’s Nirvana and the Christian view of Eternal Life. The Buddha and Jesus say that it is impossible for any person to achieve these things. Why? Because Eternal Life is not something that you can reach out to possess. It’s not something that you can grasp onto. Once you try to grasp onto Nirvana and Eternal Life, they become like vapor. It’s like grasping onto sand when you make a fist. It falls through your fingers.

But for God, anything is possible. That because Eternal life is only something we can receive from God. The perfection and goodness of the world is something that is all around us and enters into us. And when we stop grasping and simply receive, our hearts and minds are open to eternal life. We develop more compassion for others. We develop more love for God and for our neighbors.

And so may we stop grasping. And may our hearts and minds be open to receiving the eternal life that God offers us here and now. Amen.

[1] For more, see Rob Bell and Don Golden’s book Jesus Wants to Save Christians, chapter 1. The whole book will blow your mind.

October 18, 2018 Sermon: The Eleventh Commandment
Recent Comments
0 | Leave a Comment
"Even the most committed belief in non violent action, even at great cost to oneself, ..."
Iain Lovejoy Is Pacifism A Luxury?
"Church is boring."
Ivan T. Errible The Poor Own The Kingdom — ..."
"" … and the Word became Flesh." That "Word made Flesh" is Jesus Christ.Furthermore, if ..."
Ocelot Aardvark Why You Should Run from “Bible ..."
"nice article."
Brandon Roberts The Gospel is Countercultural: Politics, Palestine, ..."
Browse Our Archives
Follow Us!