The RavenCast: Thanksgiving and the Apocalypse 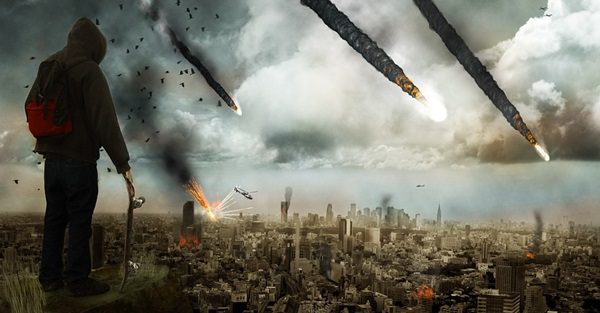 In this episode of the RavenCast, Adam Ericksen and Lindsey Paris-Lopez discuss the connections between Thanksgiving and the Apocalypse. Hopefully, you won’t experience the apocalypse during Thanksgiving dinner…but there are some connections! We are thankful to Paul Nuechterlein for his website Girardian Reflections on the Lectionary! Watch the video or listen to the MP3. Never miss an episode by subscribing to the RavenCast on iTunes, Stitcher Radio, or Podbean.

Thanksgiving is coming up on Thursday, 11/22.

Lindsey Paris-Lopez decided to kill two turkeys with one stone (but spends an awkward pause trying to think of a less violent metaphor!) and tackle both subjects at once with her good friend and colleague Adam Ericksen, pastor of Clackamus United Church of Christ in Oregon.

Thanksgiving and apocalypse. They go together better than one might think.

When many people think about “apocalypse,” images from “Left Behind” and other end-times prophesies spring to mind: God’s wrath and anger, fiery vengeance for the condemned and rapture for the faithful. Lindsey and Adam do not subscribe to this end-times theology of fire and fury, but Lindsey did study it while researching her master’s thesis in order to understand the role many Evangelical Christians believe Israel will play in what they believe to be God’s ultimate plan for the culmination of human history. Lindsey was moved to study this eschatological interpretation because she was studying Arabic in Jordan when Israel launched a bombing campaign against Hezbollah from mid-July to mid-August of 2016 in response to Hezbollah’s capture and killing of 3 Israeli soldiers. She remembers being appalled at discovering that some Christians were cheering on the violence that was causing death and destruction, disproportionately killing Lebanese civilians but also killing Israeli soldiers and civilians.  So she studied to understand why Christians would celebrate so much hatred and violence and loss of life. Such violence and death and destruction is not ordained by God, although many Christians believe that it is and thus cheer it on.

Adam recommends Raising Abel: The Recovery of the Eschatological Imagination by Girardian Catholic priest, theologian, and Raven friend James Alison. This is the definitive text on apocalyptic theology by a Girardian scholar, Adam says.

Adam goes on to explain how Christians can come to the understanding of God’s hand behind violence and destruction based on some interpretations of apocalyptic texts. Some of the scriptures indeed appear to show God sanctioning or even commanding violence. But Jesus himself secularlizes the violence to show that none of it is divine. Jesus’s revelation is that all violence is human in origin. Adam contrasts two apocalyptic texts from scripture. First he reads from Zechariah 14:

See, a day is coming for the Lord, when the plunder taken from you will be divided in your midst. 2 For I will gather all the nations against Jerusalem to battle, and the city shall be taken and the houses looted and the women raped; half the city shall go into exile, but the rest of the people shall not be cut off from the city. 3 Then the Lord will go forth and fight against those nations as when he fights on a day of battle. 4 On that day his feet shall stand on the Mount of Olives, which lies before Jerusalem on the east; and the Mount of Olives shall be split in two from east to west…

The God of this passage is, in the words of theologian Michael Hardin, two-faced. This God brings wrath against you one minute and wrath on your behalf the next, and you never know if this God is on your side. This divine warrior God appears all throughout ancient apocalyptic literature.

Contrast this warrior God with Jesus in this upcoming Sunday’s Gospel text, Mark 13. Here, Jesus is standing on the Mount of Olives, alluding to the same scene as in Zechariah. The mirrored imagery is a clue that the violence mentioned in Zechariah is being reinterpreted by Jesus. Here, God is nowhere to be found in the midst of the violence. Jesus warns his disciples not to be led astray by others who will come in his name. He foresees that others will interpret such violence as God’s wrath, and possibly even be leaders of such violence in the name of God, but he tells his followers not to fall for such a misunderstanding of God. He tells his followers not to put any theological value into the idea that such violence is from God. For us today, this is a warning against the interpretation of end-times preachers who cheer violence as God’s will. God loves end-time preachers just as God loves all of us, but violence, eschatological or otherwise, is never from God.

Those who believe God ordains violence not only effectively scapegoat God, but also often want to wage war or violence in God’s name. To worship a God one perceives as wrathful is to celebrate war against “infidels” or those whom they perceive God to condemn. But Jesus’s revelation is that God condemns no one!

Jesus shows us that God forgives even the people who murder God – which is all of us. God forgives the very worst of humanity. God is with the victims of violence, and through forgiveness, God helps the perpetrators of violence find a way out of their violence. God is with all of us, holding us when we are victims of the world’s violence, teaching us and transforming us when we are the perpetrators of such violence, and loving us through it all.

Right now, we’re in apocalyptic times – a time of reckoning, a moment of truth. Apocalypse means “unveiling,” so what is being unveiled? As suffering and stress reach peak levels, we are seeing if humanity can come together and survive, or if violence will ultimately destroy us.

Nuclear weapons plague the earth, and we are closer to nuclear midnight than ever before. Wars rage. And in California, fires are burning down homes, displacing people and taking lives. Some have even said that these fires are the wrath of God, but we know that this is bs theology. It keeps people from having empathy and caring for their neighbors, and it is exactly what Jesus revealed as false in his life, death, and resurrection.

God’s role in the fires and droughts and famines is to wrap those who are suffering in love, and to teach us to do the same.

Many of us know people who need help right now. Someday, we ourselves may need help. The Good News is that God has modeled for us and empowered us with love and compassion so that we can give of ourselves for one another.

Right now, people in this country are evacuating their homes. Others have already evacuated their homes and homelands, fleeing violence. Our nation is building walls and sending troops, even as many of our own citizens find themselves in a similarly precarious position. Maybe the hope in all of this is that we can learn through our human fragility to find empathy for each other.

Lindsey foresees other climate disasters driving people from their homes in the near future. Climate change is upon us, and it is only a matter of time before we will be thrust together – literally – as climate change shrinks the amount of available land that we live on. For all we talk about a need for borders, borders won’t matter when we have to come together as a species to survive.

Hope can be found in those who, tested in crises like those we face today, find love and generosity and compassion beyond what we ever imagined. Jesus reveals to us the depths of love that are possible, the depths of love of which we are capable. And we have to start living in our full capacity for love, or we won’t live at all.

At Thanksgiving breaks through these apocalyptic times, learning to help one another is something we can be thankful for.

Join the conversation on the Teaching Nonviolent Atonement Facebook Page!

November 19, 2018 God in the Qur'an: a discussion with Jack Miles about his upcoming book - Trailer
Recent Comments
0 | Leave a Comment
"I divide the issue into two parts; the Jesus of the Sermon on the Mount--a ..."
Karen Silver Why You Should Run from Religion ..."
"Truly God has really given us the gift of love, strong enough to overcome Satan ..."
Don Davies Sermon: Satan, Guns, and the Flow ..."
"It is a fucken waste of time"
Michael Preedom Why You Should Run from “Bible ..."
""This is a bit like saying, "A guy I worked with asked me to help ..."
Mark Jeffrey Why You Should Run from “Bible ..."
Browse Our Archives
Related posts from Teaching Nonviolent Atonement