Meditations on the Magnificat: Mary’s Courage and Modern-Day Bearers of Love 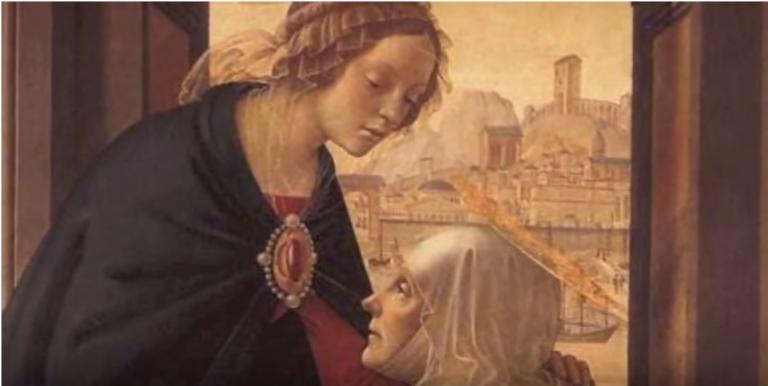 Rejoicing in the Midst of Vulnerability

The fear had passed.

The message that had come to her in her solitude, that she would conceive and bear a son, had startled and confused her… how could it be? She was a teenager, barely of childbearing age, still unmarried. Pregnant. In a patriarchal culture. In an occupied land, at a volatile time, when tensions were high. She could expect to be shamed, shunned, perhaps deserted by her fiancé and cast away by her society. There was no place for an unwed mother or her child in her world. Were these thoughts racing through her mind in the instant before she consented?

And with elderly Elizabeth’s encouragement and blessing, with the unexpected, miraculous babies dancing in their wombs, Mary rejoiced.

My soul magnifies the Lord.

Her soul magnified, illuminated, revealed the Lord to the world. Her body nurtured the body of the Lord. The Lord is Love. Love grew within her.

Courage, Not Virginal Conception, is the Real Miracle

The courage strikes me as the greatest miracle. The courage and the joy. The virgin birth is at the periphery of my faith, not central to it. The life of Jesus – the one who lived into and calls us into full humanity, the living Incarnation of Love who calls us together in Love, who forms us into one communion, one body, without hierarchy or outcasts or scapegoats or enemies – that is the beating heart of my faith. Not a miracle of a sexless pregnancy. And yet…

Mary’s courage and strength and joy in a time of utter vulnerability is indeed a miracle. A literal inspiration; the Spirit breathing life into her also breathes life into me. If the Magnificat reflects her true words, her true feelings… then something extraordinary indeed happened to her, within her, to cast out her fear. She sings for joy at the life growing inside her, knowing she may face ridicule and rejection – if not from her fiancé, then from others who won’t believe her story. But she affirms herself and the life within her, she celebrates, she prophesizes a world of justice and praises the mercy of God. This does not sound like someone who was used and abandoned (whose fiancé needed to be convinced not to divorce her), but someone who found her worth in the loving embrace of God.

I honestly find it easier to believe in a virginal conception than in an unwed mother finding the strength and courage to raise an instrument of peace and justice in a patriarchal world and rejoice in spite of a culture that would cast her away without some divine intervention involved. So when I say, “Born of the Virgin Mary,” every Sunday, I mean, “Born of the courageous, fearless, ready-to-take-on-the-world-in-spite-of-everything Mary.” I find it easier to believe in the virgin birth than in an unmarried girl rejoicing to find herself pregnant in the midst of a patriarchal culture. But with God, all things are possible. At any rate, it’s the courage and the joy at a world being turned upside-down, not the nature of the conception, that is the true miracle.

At what could have been the most frightening time in her life, Mary sings hope into the world as she nurtures it within herself. She sings of the lowly being uplifted and the hungry being filled. She sings of a world about to be turned upside-down, the powers of greed and domination overturned, giving way to blessings being poured upon those who once had nothing. She rejoices, because she knows the true nature of God as relational, world-transforming Love, knows this deeply and intimately within herself. Embraced by Love, she is bears Love within herself and welcomes Love into the world.

Courage in the midst of vulnerability. Joy illuminating the bleakness. Love emboldening and empowering the weak, raising them out of obscurity into the center of a new world flowing from them, a world of empathy and embrace expelling enmity and exclusion. This is the miracle of a young girl bearing God to the world – the miracle heralded in the Magnificat.

Who are the Love-Bearers Today?

Fast forward 2000 years. In the heart of the American empire, leaders are making war around the world. Refugees of US violence and greed are fleeing their homes and some are arriving on our nation’s doorstep only to be tear-gassed and turned away. Resources for housing and education and healthcare are being drained from the people who need them most and poured into the war machine and the pockets of the already wealthy.

Who, today, are the courageous ones who answer the call of compassion and justice when it overwhelms them? Who are those who will bear Love to the world?

They are everywhere, of course. I find particular hope in three amazing women of the 121 who will soon serve in the upcoming Congress. For me, they represent not political parties or contentious power struggles, but Love emboldened to work for a more just, more compassionate nation and world.

Deb Halaand, one of the first two Native American women to be elected this year, is promising to work on policies that will uplift everyone, especially the poor and vulnerable, including universal healthcare and converting the nation to 100 percent renewable energy. But she is also bringing attention to a less-well-known matter: the hidden epidemic of the disappearance and murder of Native American women. Deb Halaand is exposing this epidemic to the light of day and is in a position to create and implement policies to save lives. She is a beacon of hope and a bearer of Love to the world.

Rashida Tlaib is the first Palestinian Muslim American woman elected to Congress. At a time when the people of Gaza are trapped in an open-air prison, cut off from basic necessities of food, water, medicine, and electricity, when their demands for the right to return to their homes are met with lethal violence, support for Palestine is still met with charges of anti-Semitism. Yet Rashida Tlaib successfully campaigned as a Palestinian woman, highlighting the humanity of Palestinians as well as that of vulnerable people right here in the United States. She is uniquely positioned to show that support for Palestine is not enmity toward Israel. Rashida Tlaib can influence American leaders to finally be honest brokers of peace in a vital, volatile region. She is a beacon of hope and a bearer of Love to the world. And finally…

Alexandria Ocasio-Cortez, the youngest congresswoman in history, was motivated to a life of public service when she witnessed the injustices of Standing Rock. Seeing the Dakota Access Pipeline pushed through over the objections of Native Americans struggling to protect their land, water, sovereignty and future, she stepped up and into the streets, connecting with thousands over the course of her campaign. She challenges the militarism, racism and classism that are a crumbling foundation beneath the surface of US policy and politics, and will strive to uplift the poor and be a steward of the earth with her Green New Deal. She is a beacon of hope and a bearer of Love to the world.

There are so many more whose stories I have yet to learn, including Ilhan Omar, a Somalian refugee at a time when refugees – including from Somalia – are being created by and shunned from our nation.

But, I can hear a critical voice in my head chastising, why look to the halls of Congress – seats of power – to find those who bear witness to Love today? Love was born into the world through the weak and marginalized, not those who ascended the ladders of power. And is it appropriate to find “modern Marys” in leaders who themselves may not affirm Christianity, or is it inappropriate appropriation?

Others may answer differently, but I see these leaders as women moved by Love to serve all – especially those in need – for the sake of justice and restoration. They come from humble beginnings and did not climb to the top so much as propel themselves into the spotlight, motivated by love and service. They need not affirm the doctrines I affirm or pray as I pray (or even at all) to be moved by Love. I see Mary not as a religious icon, but as a bearer of justice and hope, and I see the same hope in these women. But not only there…

Mary was not a politician, of course. She was a mother. She was a nurturer who nourished, brought forth, and cultivated the seed of Love planted within her.

Love is everywhere. God guides Love into places of consequence for many, and God ignites love in the small, forgotten corners of the human soul. If God is Love, then Love is the element that makes up the world. Like matter, love can neither be created nor destroyed. It is rather found and nurtured, growing within all of us. Those who draw upon the love within themselves to summon it forth from others live into their destinies as Love-bearers, magnifying Love to the world. I find this love in teachers, counselors, strangers, children… Everyone has a world of love within themselves. When we bring that love forward, we let God grow within our hearts and bear God, magnify God, to the world.

May we answer the Spirit of Love that calls us to bear the love within ourselves to a world in need, and may we humbly receive and welcome the Love that is born each day into the world, transforming us from the inside out.

Who are your models for bearing God’s love to the world? Who gives you hope in the darkness? How are you called to bear love to the world? Join Lindsey Paris-Lopez and Adam Ericksen as they discuss the Magnificat Wednesday, December 12, at 10 CT. And as always, you can learn more about a Girardian perspective on these and other scriptures from Paul Neuchterlein’s wonderful site, Girardian Reflections on the Lectionary.

December 10, 2018
All Flesh Shall See Salvation – Advent as Political Protest
Next Post