Be Not Afraid: Advice from Africa’s Peace Movement 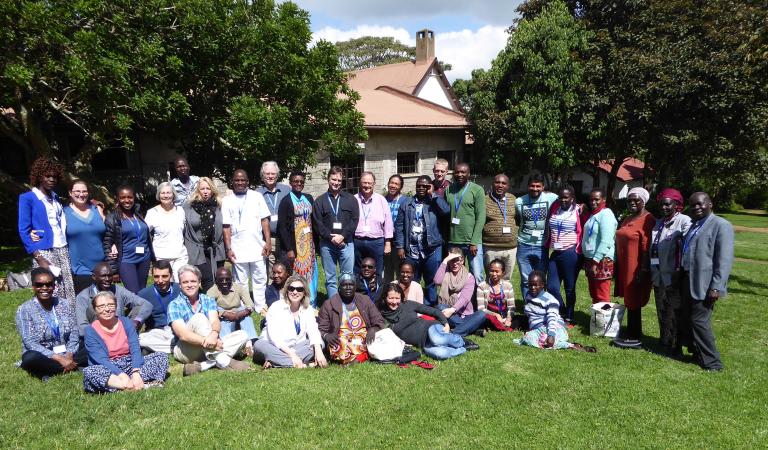 If you are beginning to doubt that violence can resolve conflicts, achieve peace or guarantee security, you are not alone. You won’t see headlines declaring “Millions Around the Globe Fed Up with Violence, Seeking Alternatives”, but a global movement is emerging that inducts victims and perpetrators alike into nonviolent relationships that make peace a real possibility. Zones of safety are taking root in places across sub-Saharan Africa long fraught with violence and the legacy of colonial oppression.

I know this because of the time I spent with thirty-five remarkable people at a conference in Nairobi, Kenya. These living saints embody the virtues that animate nonviolence – courage, truth, respect and love – and have had great success protecting civilians caught in the cross-fire of violent wars, armed rebellions and community conflicts. The conference gathered together groups from across sub-Saharan Africa who are employing Unarmed Civilian Protection (UCP) to reduce violence and conflict in their countries. The conference is part of the grand vision of Mel Duncan of Nonviolent Peaceforce (NP) to document the expertise of 42 organizations using UCP in 24 areas around the world. These groups have emerged independently over the last ten years or so because, Mel explained, “the time is right” to find an alternative to violence.

Here are just two of the stories I heard in Nairobi about what it is like to enter hot conflict zones without any weapons other than a commitment to nonviolence, a willingness to live in the villages caught in the crossfire, and the grace to listen to victims and perpetrators.

The Suffering of the Mamas

Moses* is from the Tamil community in Sri Lanka. When civil war broke out in the 1980s over the creation of a separate Tamil state, Moses’ father was detained for investigation. Out of 150 men taken from his village, only his father survived. During this difficult time, his mother struggled to care for her children and prevent them from being recruited by armed forces.

Because he saw the toll this took on his mother, he told me, “I know the suffering of the mamas,” no matter where they live. His passion to help women keep their families together took him to South Sudan in 2011 to work in areas affected by the Lord’s Resistance Army (LRA) which was operating in neighboring Democratic Republic of Congo (DRC). This rebel group became notorious for their abduction of more than 30,000 boys and girls to serve as child soldiers on the front lines. Working with affected communities on the border where no one else would go, Moses helped establish an early warning system to anticipate and prevent attacks by the LRA. Keeping the children safe was the best way to help the mamas.

Helping the children recover from abductions and be reunited with their families was part of his work as well. When children were rescued, Moses’ team from Nonviolent Peaceforce offered care and time to heal from trauma. Among the care given was training in nonviolence so the children could protect themselves from being abducted again. “The children came to like us because of our nonviolence,” Moses explained. The rescued children “are still alive and the day will come when they will spread the word of nonviolence to the people of South Sudan.”

I Said No to Violence, So Can You

Naomi is a twenty-eight-year old woman who was born as a displaced person in a Somali refugee camp. She told me that women and children are the ones most affected by conflict, so much so that they come to accept it as normal. Working in South Sudan with battered women, Naomi heard how the women justified their husbands’ violence. They made excuses, saying things like “he hits me because he can’t find a job” or “he hits me because we have been displaced three times.” 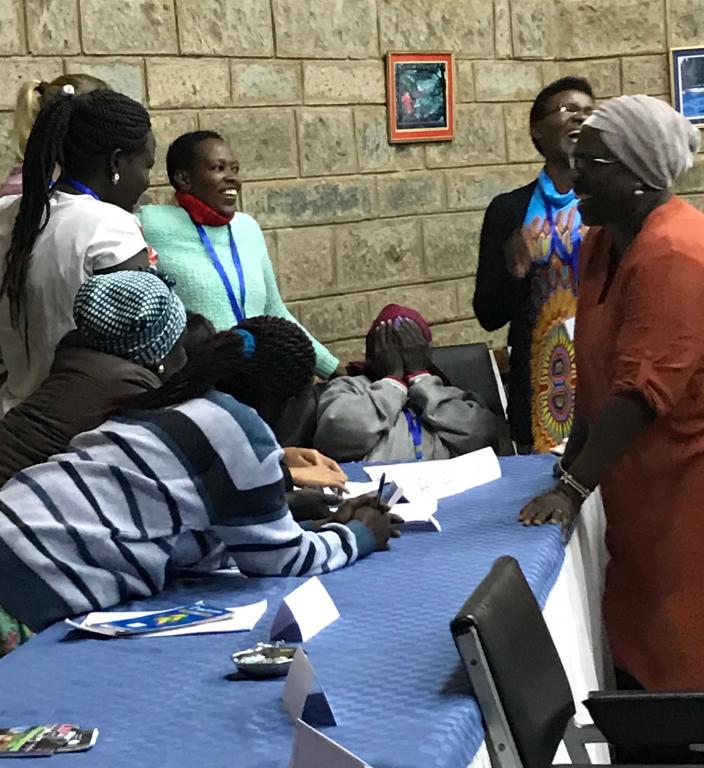 Naomi knew she would have to shift their thinking, so she began by asking “What do you think violence is?” As the women shared, Naomi was able to offer what she thought about violence from her experience as a displaced person. She told them that she had learned to say no to violence and abuse. Over eight or nine months the women came to believe that if Naomi can say no to violence, then so could they. The community got to a place where the entire community, men, women and youth, could clearly say, “If you hit me, that’s violence. And if you hit me, I won’t accept it anymore.”

Naomi explained that because many members of NP teams come from conflict zones, “the discussions around rape, early marriage, alcohol and substance abuse became things everyone could talk about openly and freely and there were no repercussions in having that conversation. It took a long time because we have to live in that community, we have to see that violence, witness how women and children normalize that violence and from being able to have a discussion of nonviolence, the dynamics change.”

The Courage to Banish Violence

Sometimes all that’s missing to transform a violent situation is awareness that alternatives to violence exist. Often in communities plagued with violence their only options seem to be living in fear, hiding from perpetrators, or arming themselves to strike back. But Nonviolent Peaceforce is changing all that. Moses and Naomi and hundreds of dedicated people like them are giving people hope for ending the cycle of retaliatory violence and building sustainable peace. Mel Duncan’s vision is that hundreds will become thousands and that within ten years the funding for UCP will be on par with the funding for armed peacekeeping, meaning that it will be in the $3 billion range. I love that vision and I believe it just might become a reality. Here’s why.

We all know intellectually that “violence begets violence”. It’s so common an expression that it adorns memes, dishtowels, and t-shirts. But if we know it with one part of our brain, there’s another part that stubbornly clings to the vain hope that one day soon the last enemy will be eliminated, the final bomb will be dropped, and the last war fought so that peace and security will reign forever and ever. But humanity has been pursuing this path to peace for millennia, long enough for us to face the evidence: violence will never bring us peace.

It’s an odd reality that Americans, protected by two oceans, secure borders and the best funded, most advanced military machine on the planet, are plagued by fear. We are frightened of poor, displaced, marginalized people who have no power to harm us, of poorly funded misguided men, and ideologies that are so obviously bankrupt that without our opposition to them they would die a natural death. The truth is that those who rely on violence for safety, just as Americans are doing, will always be afraid that they will be the next victims.

I will close with the words of Ephraim, a Kenyan doing peace work in Sri Lanka, who convinced a Tamil commander to release the children he had been holding as bargaining chips. Ephraim asked him to consider the methods of Mahatma Gandhi who did great things for his people using nonviolence. To which the commander responded, “Sometimes we look for solutions far away, but actually we have the solutions within us.” After telling me of the happy outcome of this encounter, Ephraim offered these words of advice to a fearful world 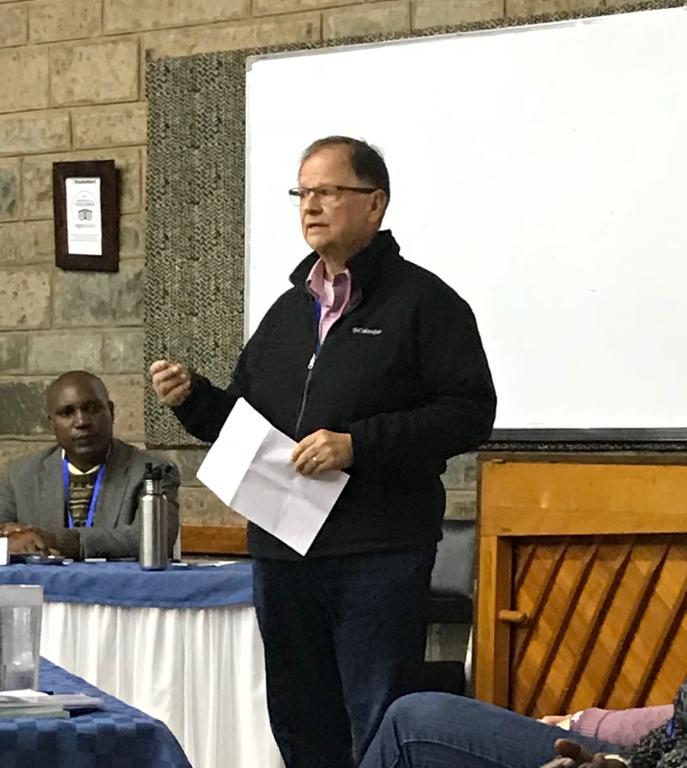 Nonviolence is alive and we should not be afraid to use it. Most of the time, many people resort to violence because it is easy. It’s easily available or it’s something that is ingrained in our upbringing that we can shout someone down when we disagree with him. We can beat somebody into silence. But nonviolence is really a powerful tool when it is used in a spirit of truth, respect, courage and love. I’m telling you, if you use nonviolence in this way you will win over any person who will want to harm you.

Ephraim wants to calm our fears so that we can find our way to authentic peace, a peace that will be global in its reach. Let’s do what we can to make Mel Duncan’s vision a reality. Support Nonviolence Peaceforce by spreading the word of the power and truth of nonviolence. And if you’d like to send a word of encouragement to Moses, Naomi or Ephraim, post a comment on the NP Facebook page and someone will pass it along to them. Peace be with them and with all of us as we dare to banish violence once and for all.

*Not his real name. The names of all three civilian protectors mentioned in this article have been changed.

January 10, 2019 Girardian Reflection on the Lectionary: The Baptism of Jesus: Deconstructing the Fires of Hell
Recent Comments
0 | Leave a Comment
Browse Our Archives
get the latest from
Progressive Christian
Sign up for our newsletter
POPULAR AT PATHEOS Progressive Christian
1

Don't give yourself away
slacktivist
Related posts from Teaching Nonviolent Atonement