Girardian Reflection on the Lectionary: The Baptism of Jesus: Deconstructing the Fires of Hell 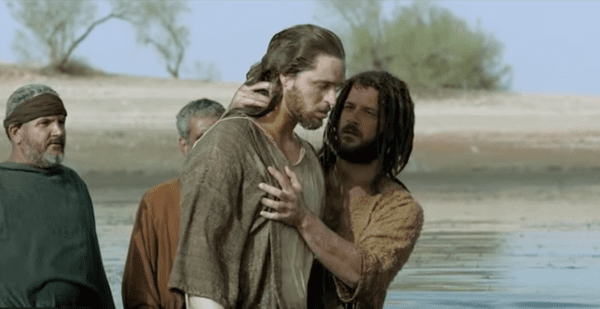 Adam is feeling hopefully because more people are calling out political fear mongering. Even Fox News’ Chris Wallace and Shepherd Smith are challenging fear based “statistics” that are used to scapegoat immigrants!

But Adam and Lindsey find even more hope in the Biblical text!

Isaiah gave words of hope during this time of horror. Isaiah says that when you walk through the waters and through the fire, God will be with you and you will not drown and you won’t get burned.

As Paul Nuechterlein states on his website “The Girardian Reflections on the Lectionary,” water and fire were used to sacrifice people. People were drowned in water or forced to walk through fire as a sacrifice to the gods. This passage is an anti-sacrificial text. It is not God who demands death through sacrifice. Humans are the ones who sacrifice on another. God is on the side of the victim because God is with the victim, not the victimizers.

But God does say that God will give Ethiopia, Egypt, and Seba in exchange for the people. Does God sacrifice the enemies of Judah in order for Judah to survive? There’s another way to interpret this passage. Those in exile became contributing members of their societies. There is some debate about this, but it’s possible that some of those in exile were slaves. Either way, when the people went back to Judah, it changed the economy of Ethiopia, Egypt, and Seba. It was painful in the short term for those nations. So, in a sense, whenever God works to change an economic system for the benefit of the marginalized, those who are better off don’t tend to like it.

Luke 3:15-22 – The Waters of Baptism Extinguish the Fires of Hell

The lectionary takes out verses 18-20. We think this is a bad idea! Leave those two verses in there. Why? Because Luke emphasizes the politics of the Gospel. Jesus came during a certain political moment – when Herod was king. Luke juxtaposes the Empire of Rome, and the Kingdom of Herod, with the Kingdom of Heaven. Luke is political – he names names. And what does the Kingdom of Herod do to political enemies? It locks them up! Luke wants us to know this because politics matters to Luke, so don’t take that out!

John the Baptist says that one who is more powerful than he is will come and baptize with fire. He will separate the wheat from the chaff and “the chaff he will burn with unquenchable fire”!!!!

Ouch. Does your mind go straight to the fires of hell? Hold on a minute. That’s not with this is about. For the most part, fire in the Bible is not about punishment. It’s about purificiation. The wheat and the chaff were once one element. Jesus separates the wheat from the chaff in all of us, and the chaff he will burn away. Isaiah said cultures would change and that change would be painful. The same is true when we change and our chaff is burned away. That’s what this fire language is about – not hell. But, could the fires of hell also be a purifying agent? Paul says in 1 Cor 3:15 that “If any man’s work is burned up, he will suffer loss, though he himself will be saved, but only as through fire.” Fire burns, but it is meant to purify, not punish.

Could one say that the water of baptism extinguish the fires of hell?

When Jesus was baptized, the spirit in the form of a dove comes upon him. Interestingly, the symbol of the Roman Empire was a fierce eagle – a bird of prey. The early Christians had a different symbol, a peaceful dove. These symbols were apt metaphors for both entities.

For example, Caesar and Herod both through the way to peace was through violence. Herod killed his political enemies in many ways, including by drowning his brother in law in water. Isaiah spoke out against this form of sacrifice 500 years earlier. And now Jesus is held under water by John the Baptist to be lifted out of it and into new life. Jesus heard the voice of God confirm what was always true about Jesus – that he is the Son of God.

And in a sense, that’s what baptism is for us too. It’s a sign of what’s always already true – no matter what the Herods or Caesars of this world say, what God says who you are. And you are a beloved child of God.

January 9, 2019
Be Not Afraid: Advice from Africa’s Peace Movement
Next Post