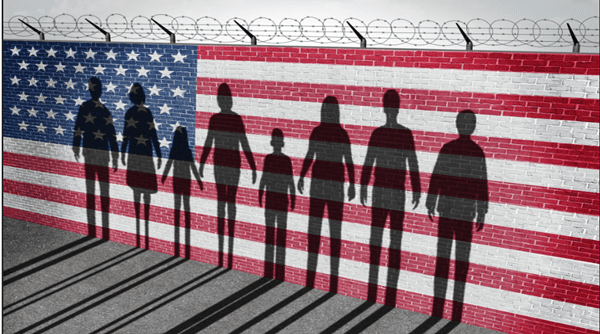 It’s time to tell the truth about the Wall:
Impossible, immoral, inhumane…
It won’t stop drugs or overstays at all…
What is Trump thinking? This is just insane!

The wisdom of Robert Frost’s “Mending Wall,” has been on my mind for days as I’ve contemplated the complicated issues of immigration and the manufactured crisis of the government shutdown. “Before I built a wall, I’d want to know / what I was walling in or walling out/ and to whom I was like to give offence.” Indeed. With all of this talk of a wall, what would we be walling in or out? Do good fences really make good neighbors? With these questions swirling through my mind, I tried to write a modern parody of “Mending Wall.” I tried but failed. The harsh truth requires prose.

The Early Years of the Wall

The harsh truth doesn’t begin with Trump. The “wall” doesn’t begin with Trump either. There are over 600 miles of fence along our southern border. It started during the Clinton years, when NAFTA devastated the economy in Mexico. Overnight, Mexico went from a corn-exporting country to a corn-importing country, according to journalist Margaret Regan, author of The Death of Josselin. Farmers could not compete and could no longer make a living. Poverty pushed some of the migration we still see today. Yes, there was migration to and from Mexico before NAFTA, but around the time NAFTA was passed and desperation increased, something else happened. The Clinton administration built fencing to close urban crossings, pushing migration further into the desert. “We did believe that geography would be an ally to us,” Doris Meissner, INS commissioner under Clinton, said.  The Clinton administration believed that once the urban areas were closed, unauthorized immigration would dwindle to a trickle. They were wrong.

The wall did not solve unauthorized immigration, but it did make it much harder. For some already here, particularly men sending money back to their families, the closing of urban crossings disincentivized going back to Mexico as they once did. Some, instead, sent for their families (likely underestimating the risks), making the fencing – in those situations at least – counterproductive. Those who tried to come into the country for economic opportunity were highly motivated by the desire to provide for themselves and their family and were undeterred by fencing, vehicle barriers, and surveillance. As each new mile of security measures crept up along the border, routes for migrants became increasingly circuitous – and deadly. Long journeys through harsh, rocky desert terrain often resulted in injury or death by dehydration or hyperthermia in the summer or hypothermia in the winter. Since 2000, about 7,216 deaths along the border have been reported. This fails, of course, to include untold numbers of migrants who died and were never found.

The lonely, painful deaths in the desert may be the biggest tragedy of our nation’s immigration policies, but they are not the only tragedy. The failure to recognize the strong incentive for migration in the first place, and the role the United States played in undermining economies and governments south of our border, are tragedies that precipitated these deaths. Xenophobia and scapegoating – misappropriating the blame for economic stagnation at home onto immigrants – are tragedies that precipitated these deaths. The redefining of undocumented immigrants as potential terrorists after 9/11 further exacerbated the tragedy of failing to see the humanity and desperation of those who would leave their homes hundreds or thousands of miles behind just to try to survive or provide for their loved ones. And the treatment of undocumented immigrants – from freezing detention centers and windowless cells to deliberate disorientation (releasing migrants far from their entry points to deter re-entry) – is a moral tragedy that precedes and was continued under the Trump administration.

When spokespeople on either side of the political divide speak of border security, neither talk about the deaths our security measures have wrought. Leadership from both major parties speak of commitment to border security, with one party emphasizing the need for more physical barriers and the other speaking of those that already exist and promising to balance the need for more security with other national needs. But the moral catastrophe of pushing migrants into the desert where they may grow ill, suffer injury, or die, is not a part of our national discourse. The rivalry over how best to secure our borders is based on a fundamentally immoral premise that is rarely acknowledged.

A quick point must be made to say that while I criticize our border security policies, I acknowledge the good work of people who enforce them. Customs and Border Protection agents save the lives of migrants in the desert. But they would not have to do that so often if urban crossings were open and our policies allowed for more legal immigration.

Today, as economic opportunities are growing in Mexico, patterns of migration are shifting. Unauthorized immigration is waning while more refugees from El Salvador, Guatemala and Honduras seek legal asylum. These nations have been devastated by violence and oppression that the United States has had a key role in instigating or supporting for decades. Migrants who come by the thousands now seek safety in the very nation that has had a key role in making their own nations unsafe. They are not climbing, cutting, or tunneling fences (all of which are possible to do) but coming to legal ports of entry, finding safety in numbers as they travel together. A wall does not address the situation of these migrants who seek entry into our nation, and therefore fails to adequately acknowledge the current immigration situation on our southern border.

Two additional points must be noted. The first point is that there may be those who seek asylum who are not part of these groups and who may be in so much danger that prolonging their routes to find legal ports of entry could prove deadly. Under international law, those seeking asylum can legally enter a nation anywhere as long as they present themselves to authorities as soon as possible. A wall inhibiting them from doing so is cruel, and considering the role the United States has played in destabilizing their nations, it increases the blood already on our hands. The second point is that money going to the wall would be better spent on opening more ports of entry as well as providing the facilities needed to aid migrants: shelters and cafeterias, hospitals for treating the sick and injured from their long journeys, and courts to process asylum claims.

Now, in a further twist of irony, our government is shut down over an inability to agree to a wall that would further deny our nation’s responsibility to our neighbors and compound our inhumanity. As is so often the case in rivalries, the very thing for which people claim to fight is sacrificed for a “win.” President Trump claims to be fighting for the security of the nation, but our nation is less secure as 800,000 federal employees go without paychecks, including TSA and, ironically, CBP. We are less secure as families struggle to pay bills, making children go hungry. We are less secure as food goes untested because the FDA is unfunded. We are less secure as those who rely on food stamps may not receive them in the near future. We are less secure as those who rely on public housing are facing evictions. Our fundamental duty as citizens – to share a degree of responsibility for the welfare of one another through our tax dollars – is undermined by this shutdown. Immigrants – whether documented or undocumented – contribute to our economy and our communities without receiving the same benefits as citizens. Yet in an effort to keep undocumented immigrants from our nation, fundamental necessities are being withheld from everyone. A cynical ploy ostensibly to secure funding for security has left our nation less secure.

The insecurity reaped by the shutdown will be blamed, by some, on the president’s political rivals and on immigrants themselves. The shutdown will exacerbate real problems of economic insecurity for which immigrants are often blamed and feed the narrative of anti-immigrant sentiment. But we can change that narrative.

My mind returns to Frost: “What are we walling in or out?” A wall would circumscribe our own consciences, our imaginations, our ability to know – and therefore love – our neighbors. It would wall out people seeking safety or economic security, but it would not wall out our prejudice, ignorance, or fear. Rather, it would compound them. Oceans haven’t made our nation feel safe from the peoples overseas who live under the rain of our bombs; a wall that could be breached and won’t stop drugs or overstays would exacerbate, not calm, xenophobia and dehumanization.

And as Frost says, “Something there is that doesn’t love a wall.” Nature itself would rebel. The damage to our ecosystems a wall would cause would be devastating to humanity and all of nature and exacerbate all the other problems fencing along our border has already created. A wall would exacerbate the damage of climate change and impede us from working with our neighbors when the time comes – sooner than we realize – to work together to restore our planet and ensure our survival.

Because the time is coming – indeed is here – when we must work together as a human race to ameliorate problems that have no regard for borders. The planet cannot survive our enmity, hatred, and violence, and will become uninhabitable and expel us all unless we come together as a human community to care for her. Walls cut us off from our own future, which must be cooperation if we don’t want it to be extinction.

It’s time to tell the truth about the Wall,
And then tear down the fences that we have.
Walls deny our duty to each other;
In building them we do ourselves no favors.
Here’s the truth: Good friendships make good neighbors.

January 10, 2019
Girardian Reflection on the Lectionary: The Baptism of Jesus: Deconstructing the Fires of Hell
Next Post