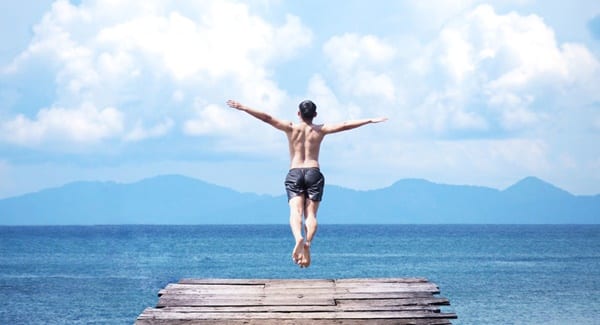 Welcome to the Girardian Virtual Bible Study! Each week we explore the lectionary passage with the help of René Girard’s insights into human relationships. We hope you enjoy this installment of the GVBS. Join us next week at 10 am Central on the Raven Foundation Facebook page for the live show. The show notes and video recording are below. This week’s episode explores Epiphany 4, Year C – Jeremiah 1:4-10 and Luke 4:18-30. You can subscribe to the GVBS on Podbean!

René Girard’s mimetic theory helps us understand the we are not so much individuals as we are inter-dividauls. We are formed by the other. This includes the larger culture in which we live, but it also includes our parents, friends, co-workers, etc.

This flies in the face of much modern thought that insists that you, “Think for yourself!” and that you “Be your own man!” But the fact is that none of us are “self-made.” We are always formed in relationships with others.

President Obama got in hot water for making this case when he said that business owners didn’t make their business. He may have been a bit ineloquent, but his point that business owners were helped by tax payers who funded roads, public utilities, public education, were all important points that are enhanced by mimetic theory.

Howard Schultz, who is considering running for president, recently claimed that he is a “self-made man.” He grew up in poverty and worked really hard to become the president of Starbucks. No one can argue against Schultz that he has worked hard, but he is not a “self-made” man. He was made by those around him, including his parents, but also tax payers who subsidized his family’s housing and the public school system in New York and the state college in Michigan that he attended.

Jeremiah points to this truth about being human. Our reading comes from the Jeremiah’s call narrative. God says to Jeremiah, “Before I formed you in the womb, I knew you, and before you were born, I consecrated you.” Jeremiah was one of the greatest prophets in Jewish history, but he was not a “self-made” man. He was formed by his culture, but he was ultimately formed by God. God appointed Jeremiah “over nations and over kingdoms, to pluck up and to pull down, to destroy and to overthrow, to build and to plant.”

That sounds very violent! But it’s important to remember that Jeremiah, as with all of the prophets, his harshest criticisms were for the rulers of his own nation! That’s one of the great gifts of the Hebrew Bible – it is self-critical, especially when it comes to the prophets. The prophets constantly tell how we messed things up by not caring for the widows, orphans, the poor, and the marginalized. They constantly rail against idolatry because worshiping other gods leads us to neglect caring for our fellow human beings.

Similarly, in the Gospel reading, which is an extension from last week, we see that Jesus is formed by his religious tradition. He is not “self-made.” Last week we saw that Jesus read from the scroll of Isaiah. He said, “The Spirit of the Lord is upon me, because he has anointed me to bring good news to the poor. He has sent me to proclaim release to the captives and recovery of sight to the blind, and to let the oppressed go free, to proclaim the year of the Lord’s favor.” He then said, “Today this scripture has been fulfilled in your hearing.”

As Jesus continues in our reading today, he provides examples from Israel’s past for what God was doing in the present. Yes, God is bringing good news to the poor, proclaiming release to the captives, recovery of sight to the blind, and letting the oppressed go free, but God is doing more than that, too. As in the days of Elijah, God is going out to a widow in the Gentile country of Zarapheth, not to the widows of Israel. Weird!

And, as in the days of Elisha, God is going to Gentiles like Naaman the Syrian to heal them of leprosy, not to the people of Israel who have leprosy. Again, Weird!

Those in the synagogue thought this was weird, too. Naaman was an enemy of Israel, a commander of the Aramean army who kidnapped Israel’s children and use them as slaves. Why would Jesus pick such a horrendous person to highlight an example of his ministry?

As you can imagine, the people become enraged and want to throw him off a cliff. I think I would want to join them! This would be like Jesus going to heal a member of ISIS or Boko Haram. I’d much rather he let those bastards suffer!

It’s important to point out that Jesus does heal people in Israel, including those who suffered from leprosy. The first part of his sermon is how he came to help those in need, which is Good News. But Jesus extends this Good News to those we least expect – to our enemies.

Avoid the long tradition of turning this into an anti-Semitic story. Many have preached this as the first example of the “bad Jews” rejecting the “good Jesus.” Don’t make that mistake! Jesus was thoroughly Jewish when he spoke these words – he even highlighted the Jewish prophets Elijah and Elisha as examples!

Even more, when we turn this text into a justification for anti-Semitism, we show that we have completely missed the plot of the story. The story isn‘t about how the “Jews rejected Jesus.” The story is about how Jesus’ followers reject Jesus. The disciples repeatedly rejected and denied Jesus during his time of need. They rejected his radical love. And Christians today reject Jesus when we claim that God only loves us and doesn’t love others.

There are very real possibilities of connecting these stories to the present struggle of the Palestinians. Michelle Alexander recently wrote an article for the New York Times titled, “Time to Break the Silence on Palestine.” She states that Martin Luther King, Jr. spoke out against he injustice of the Vietnam War, and today we must speak out against the injustice of Palestinian oppression.

Alexander highlights the organization Jewish Voices for Peace, which is doing just that. They have called for Boycott, Divestment, and Sactions (BDS) until the Israeli Government, “Ends its occupation and colonization of all Arab lands occupied in June 1967 and dismantles the Wall; recognizes the fundamental rights of the Arab-Palestinian citizens of Israel to full equality; and respects, protects and promotes the rights of Palestinian refugees to return to their homes and properties as stipulated in UN Resolution 194.”

The Jewish Voices for Peace are not anti-Jewish in their call for justice for the Palestinians. In fact, they are thoroughly Jewish in that call, standing directly in line with the prophetic tradition within Judaism and Christianity that calls us to stand with those who are oppressed.

America’s New Religion and the Scandal...
What God Wants for Your Life
Related posts from Teaching Nonviolent Atonement