Ancient Resurrection Stories: How Jesus Is Transforming the World 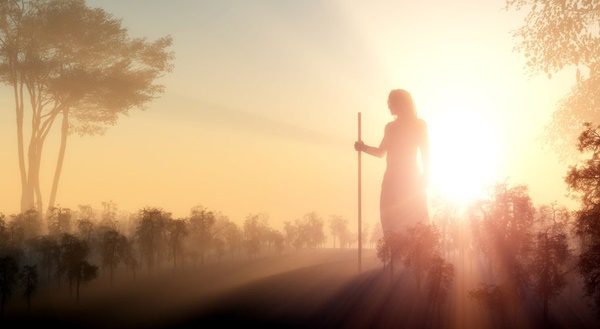 The following is a sermon I preached at Clackamas United Church of Christ, near Portland, Oregon.  The primary scripture texts was John 20:1-18.

Throughout human history, people have told many myths about dying and rising gods.

These myths tend to share a similar pattern of a god being unjustly killed and miraculously resurrecting to new life.

Personally, I think there is something true about these ancient stories – something that gets to the heart of the human experience.

One of these stories that is fairly typical of dying and rising gods is the Egyptian story of Horus. Horus was the son of the gods Osiris and Isis.[1] Osiris was the king, but Osiris had an evil brother named Set who wanted to kill Osiris so he could be king. Set also wanted to kill his nephew Horus, because Horus would have been the rightful heir to the throne.

So far, if you are thinking that this sounds a lot like our modern-day story The Lion King, you are right on track. Osiris is like King Mufasa, Set is Scar, and Horus is Simba.

Set kills his brother Osiris through an act of trickery. Young Horus hides with his mother Isis for many years in the wilderness. There was a prophecy among the gods that Horus would eventually avenge his father’s death by defeating Set.

Well, Set wasn’t too keen on that prophecy, so he began a mission to find and kill young Horus. One day, Set found Horus and sent scorpions to bite and poison the young boy while his mother was in the city. When Isis returned, “she found Horus lying lifeless”. Set already killed Isis’ husband, and now he killed her son. But Isis leaned over her dead son and chanted some magical words and resurrected her son back to life.

So, in this one story, we have two gods who were unjustly killed and resurrected back to life. But here is where the story gets really interesting. Now that Osiris is back to life and a few years have passed so Horus is a little older, “Osiris decided that the time had come to deal with Set,” which meant Osiris wanted revenge.

Osiris asked his son Horus, “What is the most glorious deed a man can perform?”

Horus replied to his father, “To take revenge upon one who has injured his father or mother.”

This answer pleased Osiris, so he taught his son how to use weapons of war to kill Set. And eventually Horus defeated Set and captured him. Just before Horus was about to kill Set, Isis suddenly felt great compassion and pity for Set and cast a spell so that Horus would drop his weapon, which allowed Set to escape.

Horus was enraged that his mother could let their enemy go. He yelled at his mother and asked how she could let Set survive. He complained that Set “is evil, and his ways are cruel beyond imagining.”

Horus’s desire for revenge could not be contained and so in a fit of rage, he chopped off his mother’s head. Horus was infected by the very evil he was trying to destroy. The resurrected Horus became just as evil as Set. Horus sought revenge against Set for killing his father. But now Horus has attempted to kill his own mother.

I tell you this story on this Easter Sunday because I think there is an important truth in it. You see, we live in a world that is often consumed with some form of violence and revenge. Osiris, Isis, Set, and Horus lived in a world that’s actually pretty similar to ours. Like them, it’s easy for us to believe that the way to peace or justice is through some form of violence.

But what the resurrected Horus shows about violence and revenge is that it cannot be contained. Horus becomes consumed by violence. The evil he tries to destroy becomes the evil he inflicts. This is the truth that the Horus resurrection story reveals – that violence leads us to become the mirror image of our enemies.

That’s why the Jesus story is so radical and important. Like Horus, Jesus was unjustly murdered and then resurrected to new life. But Jesus was not resurrected to seek revenge. Jesus’s Father did not tell him that “the most glorious deed” is revenge. Jesus and the Father who resurrected him did not come back for revenge against his followers for abandoning him and betrayed him to the cross, nor did he seek revenge against the Roman Empire for killing him.

Jesus was resurrected to transform our whole understanding of the divine realm. It’s natural for us to think that God is kind of like Horus. That we need to stay in line and obey God otherwise God will get angry and God sometimes has an anger management problem, which could lead to uncontrollable violence. So be sure to behave and don’t make God angry!

The resurrection of Jesus undoes all of that bad theology. It claims that even when we kill Jesus on the cross, Jesus resurrects and responds not with a desire for revenge, but with words of forgiveness and peace.

And Jesus sends Mary on a mission to spread the word about his resurrection. The Good News that is beyond my ability to comprehend is that God is not out to get us. God is for entirely us because God entirely loves us. That’s the message of the Christian resurrection story.

But Jesus was also resurrected to transform our human pattern from one that seeks revenge and payback, to one that stops the cycle of revenge with nonviolent action that seeks a more just world.

And I get it. There are times when I have doubts about the peace offered by the resurrected Jesus. There are times when I’m tempted to believe in the resurrection of Horus. For example, my son has a bully at his school. He frequently comes home and tells me that his bully teases him and threatens him. We’ve talked with the school counselor and have tried to do the right things. But there’s something deep inside of me that says “That kid will get his! And I hope it happens sooner than later!” When I notice that desire for revenge, I know I need to take a step back, be present to my son, and pray for this boy to be transformed and pray for my own transformation, too.

May we receive the unconditional love of Christ’s resurrection, and may we share that love with one another and the world. Amen.

April 19, 2019
The Hate That Killed Christ Keeps On Killing: A Holy Week Meditation On “Jesus And The Disinherited,” Part Four
Next Post