When In Doubt, We Are Blessed: Girardian Virtual Bible Study Preview 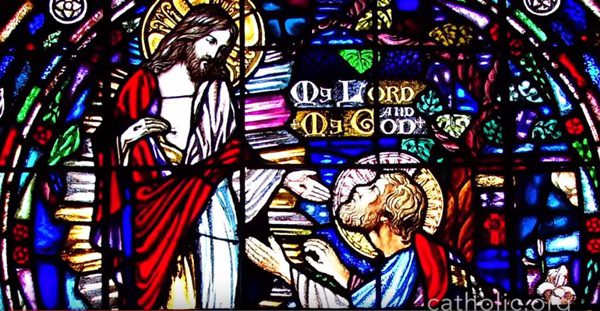 Editor’s Note: Every Wednesday at 10:30 am CT, Adam and Lindsey host a live Girardian Virtual Bible Study following the Sunday lectionary on the Raven Foundation Facebook page. We invite our listeners to join the conversation with comments and questions. I take some notes to help me prepare… and share them with you to help you do the same! This is the Girardian Virtual Bible Study preview!

“Have you believed because you have seen me? Blessed are those who have not seen and yet have come to believe.”

Okay, I’ll just admit it right now. These words from Jesus to Thomas have, in the past, been among my least favorite in scripture.

As the daughter of an atheist, I grew up knowing that the God in whom most of my family and friends believed was rejected by the man I loved most. And so, before I understood much of anything, I had to question why. I couldn’t take faith in God for granted – ever.

Nevertheless, I wanted to believe. I am not only the daughter of an atheist; I’m also the daughter of a devout Christian and the granddaughter of two former ministers. I grew up going to church and hearing stories about the Creator of heaven and earth who became human, healed the sick, embraced the poor and lame, raised the dead, and loved the little children. I wanted to know that this God was, is, real. I wanted to embrace this God with my whole heart. But if I did, I worried that I would be leaving my father behind.

And I soon understood the reasons he rejected faith. The Bible told me that the same God who healed the sick and embraced the poor also wiped out the entire world in a flood. (I don’t know if I ever thought about the story of Noah’s ark as a story of cute animals. I mean, maybe two of every kind got on the boat, but the rest died. Along with most of the people in the world!) The same scripture that spoke of a God of freedom also talked about angels killing first-born babies. I may not have felt much for the soldiers who chased the Israelites as they fled Egypt (okay, truth be told, I did feel for them, because they are people too.) But I certainly felt for their poor horses who were supposedly swallowed up in the Red Sea. And on top of all of that, I thought I was supposed to believe that God, in human form, died for our sins so that we could live because the penalty of sin and disbelief is death… and hell. I couldn’t wrap my head around it morally or intellectually.

But so many people I loved seemed to be able to embrace God, without fear and without a sense of superiority to others who may have taken different paths. There was a disconnect between the scripture I tried to understand and (1) a lectionary that seemed to leave out the most gruesome aspects, but more importantly (2) friends and family members who attributed their understanding of love and compassion to their faith in Jesus. I recognized that they had found a way to love God without embracing the exclusion and damnation to others that the Bible seemed to suggest.

If my doubts and spiritual wrestlings had only been the product of fear, I probably would have given up the journey to find faith years ago. Fear was certainly mingled in, but there was also desire and yearning, an aching for an understanding of and faith in a God who would love and embrace not only me, but also my father and everyone else who struggled with doubt or gave up faith entirely out of a firm and emphatic “No!” to violence and exclusion and damnation.

Now I understand that Jesus is God’s “No!” to violence, exclusion, and damnation.

But it has taken me a journey through doubts and fears and questions to get here, and there are often times when I still wonder and doubt.

I would hear the words of Jesus to Thomas as a child and try to suppress my questions and doubt. I wanted to be part of the “in” club that was “blessed” with faith beyond sight, beyond proof. I imagined others hearing these words and feeling a sense of superiority over and against those who doubt the resurrection. I imagined that if they really knew all the questions of my heart and mind, they would realize that I don’t belong among them. I worried that I would be looked down upon. I knew that if anyone was a “doubting Thomas,” it was truly me. I worried that I wasn’t be blessed.

But here’s the thing: Jesus appeared to all the disciples because he knew that they needed to see him. It is unfortunate that the Gospel seems to single Thomas out, because everyone had fears and doubts… so much so that they all (except for Thomas) huddled in a little room away from the crowds. (Why wasn’t Thomas there? Was he in less fear than the others? Did he actually have a faith and hope that he couldn’t recognize or name?) Jesus didn’t single out those who were not blessed from those who were. He instead blesses everyonewith love and forgiveness.

He returns to show us all the vindication of love and life over hate and death. Because he knows we must see to truly believe. We are made to learn from that which we can see, touch, taste, smell and hear. We are sensory, incarnate beings. God so loved us as to live among us and share our human nature because that is what we needed to see and know and understand the fullness of Love. I don’t believe that Jesus ever chastises or blames those who must see to believe.

Why, then, does he say “Blessed are those who have not seen, and yet have come to believe?”

To believe that there is life for this fragile and delicate world, that those who are crushed by forces of hate and apathy and death can still be embraced by love even when they no longer breathe and their hearts no longer beat, that a world dying of climate change can be made new… this requires faith that there is a power that is stronger than human destruction.

Not everyone calls that power “God.” I don’t think that is the point. I think the point is to live beyond the nihilism of resignation; to persist, knowing that “better” is possible and we can be a part of it. I think the point is to recognize the humanity in every living person even when it is so obscured by fears and prejudices; to know that there is still a heart of love beyond hate. I think the point is to recognize that there is hope for the world if we recognize that we are all a part of each other, and if we live our lives not over and against but for one another and the home that we all share. I call that driving force, that persistence in the face of all the danger and negativity in the world, that embrace of one-another for the sake of finding our true wholeness and restoring the world we share… I call that God.

The persistence of living and striving in a world where bigotry and fear and danger may otherwise hold us back — that persistence requires minds that question and seek answers. It requires curiosity and skepticism that tests everything. It requires moving beyond the comfort of the familiar, which so often keeps us from knowing one-another. It requires doubt. Thank God for Thomas and the scientific mind that seeks empirical knowledge! Without that doubt and need to question, we would not be able to learn and advance forward, intellectually or spiritually.

Doubt works hand-in-hand with a faith in that which is yet to be. It is the companion to, not enemy of, faith.

Do you have questions or doubts? You are far from alone! A Girardian reading of scripture can help us appreciate how doubt and questions can stem the tide of negative contagions that come when people are all too willing to believe the worst in and of others. My own personal journey would not have gone nearly as far without my doubts. How has doubt worked hand-in-hand with your faith?

One thing I never doubt, however, is the fact that we have so much to learn with and from each other! So please join Adam and me for the Girardian Virtual Bible Study on the Raven FB page tomorrow (4/24) at 10:30 am CT.

Whether you’re a minister preparing your Sunday sermon or a lay person trying to better understand the Bible, whatever you believe, question, or doubt, we warmly invite you to participate with comments and questions as we seek to grow our virtual community. Your presence is more than an honor and a blessing – it’s a necessity! Since we are interdividual beings, growing in relationship with one-another, we need each other! Your participation is an integral part of the Girardian Virtual Bible Study!

April 22, 2019
Ancient Resurrection Stories: How Jesus Is Transforming the World
Next Post