So, the other week in the depths of my Witch Like You Mean It post, I wrote: “Do you wish to walk this path, or do you just want to wear it?”

Which I thought was a really sharp, poignant question with a very specific meaning/point: are you really doing what you need to do down to the roots, or just applying a veneer?  To me it brought home another metaphor of the point of the whole article.

But it seems some people took it very literally.  Like even beyond mainstream fashion trends, and more whether or not you should wear a pentacle or witchy-looking attire.  Or setting up some sort of visual system to judge other people.

Personally, I don’t care what you choose to wear or not wear, as long as you’re taking care of business.  Nor am I encouraging people to judge others, as much as pushing you to judge yourself.  My job here is to get folks to stop and consider things a bit more deeply, to inform and explore, and to inspire you.

And for the record, as my partner Nathaniel likes to say, judging isn’t necessarily a bad thing.  The word itself as a verb means “form an opinion or conclusion about.”  Judging a case is about deciding what is going on in the situation, what are the facts and factors? What is the best outcome? What direction should things head, what actions need to be taken?  It comes down to who is doing the judging, and are they qualified to be in that position?

But getting back to the literal wearing of stuff, I do want to talk about that a bit more.  Also, last week I saw a friend ask about folks dressing up for Pword events, versus what do they wear back at home to get work done? I happened to be packing for Hexenfest at that moment, so it was an interesting thing for me to ponder as I tried to figure out what to bring for a temperature swing of 45 degrees daily, costuming for two dance performances, suitable attire for workshop, and vending set-up/break-down.

That’s a lot of logistics for a brain that just finished writing its third book, so I didn’t do my best packing job ever.  But my “festival” attire doesn’t deviate much from my daily attire, which could probably be described as witchy, quirky, goth – which has been happening for as long as I can remember. When we do media conventions like DragonCon, I’m often asked who am I cosplaying.  “I’m just me” always gets a few puzzled looks.

I’ve been lucky that for most of my life, I’ve lived in areas where being a bit “eccentric” is not unusual: Providence, Seattle, the Bay Area.  How I dress is directly a result of my thoughts and feelings. I feel powerful, put-together, and well-crafted when I dress with care. I have certain clothes I wear for when I’m about to make a huge mess in the studio, or I’m sick, but if I’m going out, I change if I can.  Because I feel schlumpy wearing those clothes out in public – messy, out of sorts.

Similarly, there is a method to my madness in how I adorn myself with jewelry.  There are certain necklaces and bracelets I do not leave the house without wearing. There are additional pieces that I put on depending on how I’m feeling and who I may be interacting with.  Then comes the consideration for  visual-only “accessorizing” last.

As someone who is also a professional performer, I have a definitive line between what is costuming for the stage, and what is for daily-life and special-occasion attire.  It’s never cosplay because I’m not pretending to be someone else/recreating an established look that defines a character.  My choices for the stage have to do with what works best visually on stage, what captures or emphasizes movement effectively on my body, and what fits the overall mood of the performance.  It’s still me, but I have to take certain factors into consideration to do that job professionally.

It’s one form of extreme glamour for sure to dress for the stage.  But daily life also involves glamour in multiple ways.  It not only reflects my inner mode and sense of self, but it also bolsters it.  To quote an old SNL skit: If you look marvelous, you will feel marvelous.  The other aspect of that is, how you feel and present yourself visually in the world also affects others around you – for better or for worse.  But typically, if you’re feeling confident and in control, others will pick up on that.

Then there are the folks who can’t wear what they want to on a daily basis.  I recognize and honor that.  Either because of their job or where they live, or who they live with – they aren’t free to express themselves.  They have to wear a uniform, or conform, or blend in.  So that means when they get to be “amongst their people” at a festival, they’re going to take advantage of that opportunity.  It’s a lot more effort than what I personally do, but I totally understand where they are coming from.  Dressing up doesn’t make them “Playgans.”  It’s more like releasing the floodgates for them.  If you can’t dress or feel like yourself most of the time, you have to make the best of the times you can to be healthy.

So what you wear can have a lot of impact on your life. If wearing a certain item gives you a sense of identity or protection, that is a form of sympathetic magick.  You’re connecting who you are and what you’re doing together with visual cues.  I don’t see that as “dressing up” but wearing your inside on the outside.  And in following that theory, it’s quite possible that following a trend can also have a similar effect inwardly.  So if dressing witchy leads someone to understanding themselves more, and becoming more in touch with themselves and the world, then more power to them.  If it’s just a trend, it will pass like all trends.

Somewhere in there is a fine line between being the Witch and wearing the Witch. Only the person on the inside knows the difference.*

*technically, I’d also say the gods and spirits know too – and anyone that person may work with… 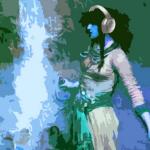 September 27, 2017
Audio Inspiration for Witches - 8 Podcasts You Need to Hear
Next Post 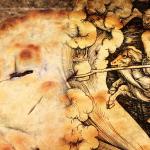 October 6, 2017 There is No Knowledge Pie
Recent Comments
0 | Leave a Comment
"Really great idea!"
JenniWest August is Cauldron Month (Tempest-style)!
"This seems like an interesting idea! I didn't think I had a cauldron until you ..."
Aelfrey August is Cauldron Month (Tempest-style)!
"Can I still use this sigil in 2022?🤔By the way, I love your blog!"
Carol P. Duarte The Encompassing Heart Sigil
"Hella sigil! Blessed Be its use!"
Pitch313 A Sigil for Reproductive Rights
Browse Our Archives
Related posts from A Modern Traditional Witch