On Clergy, NYFD, Bloomberg Not Budging

A couple of weeks ago, I noted that Mayor Mike Bloomberg was inviting neither clergy nor First Responders to the 9/11 Memorial service in NYC.

I thought public outcry might move the mule, but without any push from mainstream media, he is comfortably sticking to his guns. No clergy, no prayer, and there’s no room for the First Responders, either. Only a few will be there, by special invitation.

Making the point that the first recorded death at the WTC was Franciscan Father Mychal Judge, and that the sacrifices and energies of the clergy had earned their participation, I wrote:

Bloomberg’s priorities are all wrong. . . Mustn’t let the damn clergy murmur their vulgar prayers, or next we’ll have tent-revivalists cluttering up the fairgrounds and making such spectacles of themselves.

The big crowds for New Years Eve, or for the big parades, are alright, he thinks, but this is not for the riff-raff. Let’s just keep the invite list confined to those who know how to dress and how to behave, and which fork to use, and when.

A few emailers suggested that Bloomberg was not deliberately snubbing clergy, but that it was just “too complicated, too difficult” to arrange for a Priest, a Rabbi, a Minister and an Imam to each speak 30 words of consolation and blessing.

Actually, all it takes to assemble and plan such an event is a little leadership.

Well the New York Times is finally writing about this:

This year, there will be six moments of silence, to acknowledge also the planes that hit the Pentagon and the ground near Shanksville, Pa., said Stu Loeser, Mr. Bloomberg’s press secretary.

“The structure for this program was designed 10 years ago, with the consultation of a lot of families of those who died, and it is primarily for the families,” Mr. Loeser said.

It is wrong to say the ceremony excludes prayer or clergy members, Mr. Loeser said. Chaplains for the Fire and Police Departments and the Port Authority police often attend, and “we think most people use those moments of silence for reflection and prayer,” he said.

Got that? It’s wrong to say the ceremony excludes prayer or clergy members, just because it excludes any specific references to prayer or, um…the presence of clergy members.

Why won’t people learn to just think as they’re told?

Father James Martin (who has written a very fine reflection as part of the USCCB’s remarkable collection of 9/11 essays) is not having any of that. Over at America, he writes:

. . .excluding clergy from the official public memory of the day is almost willfully ahistorical. The clergy were a significant part of the events surrounding the terrorist attacks of Sept. 11, 2001, particularly in New York. To begin with, they were among the first groups to respond to the disaster at Ground Zero, with priests, ministers and rabbis on the ground . . e . since the 11th.) . . . Clergy from a variety of traditions provided guidance, comfort and solace for those seeking answers in the face of the death of loved ones, or simply in the face of tragedy. Religious organizations spearheaded charitable efforts both in New York and elswewhere. But most of all, the witness of the clergy on that day was embodied by Fr. Mychal Judge, O.F.M., who sacrificed his life in service to others. Fr. Judge, the Franciscan priest and New York City fire chaplain who was killed after racing into one of the burning towers to minister to firefighters, is listed as the first official casualty of the attacks on the World Trade Center: “Victim 0001.”

Dear Mayor Bloomberg, if you have managed to nettle the affable, unflappable and mild James Martin, S. J., the then you have really, really stepped in it.

Deacon Greg Kandra, who has a gift for putting the visual coda to any story, hits it out of the ballpark with this one: CLERGY NOT ALLOWED

Yeah, let’s keep the clergy on the other side of the fence.

Meanwhile, here is Archbishop Dolan, writing on the day. I am frankly surprised and disappointed that the NY Times reports him to be “untroubled” by the exclusion of clergy at Mayor Mike’s Memorial.

I really love and admire Timothy Dolan, but I feel like I want to grab his hand, announce “nobody puts Baby in the corner!” and haul him down to Lower Manhattan.

September 9, 2011 The Lemonade Stand Consigned to Memory
Browse Our Archives
get the latest from
Catholic
Sign up for our newsletter
POPULAR AT PATHEOS Catholic
1 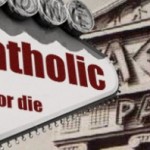