A Collected Angel in Chicago

Doubtless many of you have seen this ugly video out of Chicago. Apparently the attack happened last April, but the video is going viral, now.

It is shocking, and depressing; in a display of callous disregard for the dignity of another human person, and of his own complete lack of self-respect (not self-esteem, mind you, but self-respect) a young man punches an older man to the ground and then he and his cohorts — male and female — run laughing into the train for a quick getaway, exclaiming how great it was to see their friend mindlessly attack another human being. One is laughing so hard he or she can barely speak.

We, collectively, as a society, have done this; we have created this burgeoning anti-social free-for-all, all of us. We started it when we decided marriage could be re-created from a lifelong commitment, into a thing that could be walked away from when the bloom came free — and for about 40% of new mothers, marriage is a wholly unimportant detail. We reinforced it by putting our own personal happiness on the foundation that was supposed to support our children, and set the kids, instead, on the shallow step of “you are special” self-esteem, which communicated to a few generations that they were the sun around which the world moves. Then, instead of giving them responsibilities toward themselves or anyone else (that’s a thing you tend to learn when you have siblings, but large families have trended out) we gave them shaky, materialistic values that became as obsolete and irrelevant to their lives as quickly as the phones they use to video an attack and the computers they use to upload it to You Tube.

We did this from the left when we decided that “family” was a relative notion that didn’t need “relatives” at all, and that old-fashioned moral values were cornball; we did it from the right when we said, “just keep shopping, keep that economy going!”

But there is something wonderful in this video, too. I watched one part of it several times, just to study: about 34 seconds into it, we see a young woman walking toward the gathering. As the violence erupts you can see her legs; she is backing up, on her guard, but she never runs in the other direction, as I or many of us might have done. She hangs nearby, and when the carousers rush onto the train, she quickly goes to the victim, ascertains that he is unconscious and immediately dials 9-1-1.

What strikes me is that at no time does she engage the idiot mob; she doesn’t even look up at them. All of her attention is focused where it should be, on another human being who is in need, and she is remarkably centered — I would almost say detached and calm; her hands are not shaking. She gives a sense of being competent and in charge. As the train pulls away, she is still at her task; I can’t tell if another has come to help or if she is still on her own.

It’s a remarkable, dare I call it angelic, moment. While the world is swirling in mad chaos, there is a core of something good.

I wonder if we were meant to see that, — not the violence, but the collected response to it — and if it was meant to reassure us. The Holy Spirit has a way of confounding us — of using the most surprising means and methods to communicate something to us. I wonder if we are meant to notice this, and take stock of our own self-containment — our own availability to that core of goodness that we know certainly exists, but perhaps we have not been tapping into and integrating enough into our selves and our lives.

Maybe this was meant to nudge us to pray more, reach out more, trust more in that core — access it and fortify it within ourselves, because someday one of us may be called upon to be that calm, knowing presence in a senseless whirlwind.

God’s blessings upon that Chicago angel.

And let us pray for everyone in that video.

Related:
At Hot Air, a different perspective on what constitutes anti-social behavior

And this just blows my mind

November 12, 2011 2009: Banner Year for Abortions
Browse Our Archives
Related posts from The Anchoress 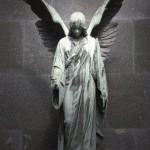