In hindsight, we’re seeing clues, now, and reading words he uttered indicating that Pope Benedict XVI has clearly been thinking of renouncing the papal throne for some time.

Forgive me if this sounds absurd on the face of it, but I am wondering if, despite these pieces of evidence, Benedict’s recent entry into Twitter has had anything to do with the seeming abruptness of his announcement.

Before you scoff, consider: the pope’s interest in, and support of, the church’s engagement with new media proves he is not exactly out of touch with the world, but when the Benedict finally logged on to Twitter he got to see firsthand the sort of raw, unhinged anti-Catholic hatred so active within social media threads. We who work in new media experience this hatred so regularly it barely registers with us, but for Benedict, or those around him, it must have been a shocking revelation to encounter the vilest expressions of hatred, the intentional voicings of malice and evil hopes, flung squarely at the Holy Father, in real time.

A hoped-for encounter with the faithful also brought an encounter with something wicked. It exposed Benedict to, perhaps, a reality he had formerly been spared.

Don’t misunderstand me. I am not saying the pope had his feelings hurt. I’m saying he looked into a depth of pain and hate and realized he needed to do something more.

A great deal of that tweeted animosity has been inspired (and earned) by the deplorable scandals of past decades (for which we are due a long season of penance) but no doubt much of it is rooted in nothing more than the church’s obedience to Christ’s commission that she be not only a consolation to the poor, the sick and the marginalized, but also a sign of contradiction to the world and its disorienting trends. I wonder if our sensitive pope looked into the abyss of pain, screaming hatred and ignorance so easily accessed by just a few clicks of a keyboard, and felt called to humility and prayer — a full renunciation of everything in the world, including earthly power and communion with the faithful — in reparation, penance.

Because we know Benedict is an introvert, and we see his tiredness, it is easy to believe that the man simply wishes, as some have suggested, to spend his last days unburdened, “reading and writing’ in an fragrant castle garden.

I don’t think so; During his entire priesthood, the man has not shaken off duties and burdens, but consented to carry more and more. This is who he is.

Increasingly, I believe Benedict’s resignation, rather than releasing himself from a heavy weight, is necessary so he may take on something much more cumbersome.

Last November, in a beautiful, intimate talk to a small gathering of elderly people, Benedict urged, “. . .never feel down at heart: you are a wealth for society, even in suffering and sickness.”

And yet he has seemed down, lately. For all of his recent weight-loss, visible in his face, the pope has seemed in all ways heavier, not lighter.

In announcing his resignation, Benedict said,

…in today’s world, subject to so many rapid changes and shaken by questions of deep relevance for the life of faith, in order to steer the ship of Saint Peter and proclaim the Gospel, both strength of mind and body are necessary, strength which in the last few months, has deteriorated in me…

Nowhere have we heard, either through official lines or “back-channels” that the Holy Father is not fully in his wits. To the contrary, his remarks are as lucid as ever.

As he has done from his first moments as pontiff, Benedict yesterday asked pardon for his “defects” and then said, “With regard to myself, I wish to also devotedly serve the Holy Church of God in the future through a life dedicated to prayer.” It’s not about him. It’s about the church he serves, as always.

He’s retiring to a monastery within the Vatican. One does not “retire” into monasticism; a monastery is not an idyllic place of retreat, but a full-thrust into spiritual depths. It is where one goes to pray, do penance and — if one is particularly holy and willing — to engage in supernatural battle with things seen and unseen.

This is grave stuff, indeed; a heavy task. My suspicion is that Benedict is not taking his leave of the papacy in order to play his piano and read his books. In the midst of the temporal Lent of 2013, he’s going to be immersing himself in the Long Lent that began for us in 2002, and is with us still.

I suspect he will be doing penance for the church, and for the world — for those of us who cannot or will not do it, ourselves.

He is going into deep prayer, and that is no easy thing. It is, in fact, his last and perhaps greatest act of self-abnegation in a life that has been full of them. He never wanted the papacy, but was obedient to where he was being led. Given that his whole life has been lived in obedience to the Holy Spirit’s lead, we should believe he is being led, yet again, and is meekly — but with paradoxical boldness — going where he would rather not go.

As did Pope John Paul II and Mother Teresa, Benedict meant it when he offered himself to God in the full rush of love, and said “use me.” As with those two saints, he is being used up to his last ember. It is only my conjecture, of course, but in my gut, I think it is so.

We won’t get to witness the last flames and embers of the 80+-year holocaust that has been Joseph Ratzinger because, as penitents have taken themselves into the desert since the earliest church, to do their separate battle and offer their weary praise, this is between Benedict — carrying the weight of all of our church-wide sins on his back — and the God who has called him.

Pray for Pope Benedict XVI as he becomes again Ratzinger, and — for the sake of the rest of us — willingly takes on a burden he will not shrug off. If he is, in fact, headed into battle for our sake, it is the most heroic thing we will never know about, in a whole life of quiet heroism.

Again in that talk to seniors, Benedict said:

Do not forget that one of the valuable resources you possess is the essential one of prayer: become interceders with God, praying with faith and with constancy. Pray for the Church, and pray for me, for the needs of the world, for the poor, so that there may be no more violence in the world. [Such prayers] can protect the world, helping it, perhaps more effectively than collective anxiety.

So, we must pray for Benedict, and with him. Let us be willing to join our Lenten prayers and fasts to those of this vicar who never swaggers, but trudges simply forward. In this way we can strengthen him, and the church, and the world, in times of great tumult and uncertainty.

February 12, 2013
Digital Field of the Lord: Hoeing the Rows, for the Seeds
Next Post 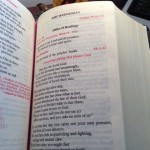 February 13, 2013 The Big Book of Lent and Easter - UPDATED
Browse Our Archives
get the latest from
Catholic
Sign up for our newsletter
POPULAR AT PATHEOS Catholic
1