If Mom didn’t say we couldn’t…I guess we can!

That’s adolescent reasoning, and of course, dishonest, but it’s also the reasoning meant to buttress up the case for gay marriage, except instead of “Mom”, the non-prohibitor is Christ Jesus, and I’m writing about it at First Things:

…we are told by Jimmy Carter, Stephen Colbert, Bill O’Reilly and others that if you look in the Bible, “Jesus never said anything about homosexuality or gay marriage.” 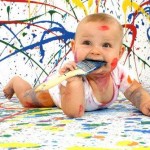 Of course, in chapter 10 of Mark’s Gospel Jesus states definitively that divorce cannot exist; these are his actual words, and they don’t matter a whit to our society, yet we must now glean our wisdom from the words Jesus did not say. The argument puts one in mind of a skit from Rowan & Martin’s Laugh-In, in which comedienne Totie Fields, dressed as an enormous toddler, sang,

For the five or six thousand years preceding the last fifty, no one needed an explicit pronouncement that marriage was an office involving opposite sexes because it seemed obvious. In the last half century, however, human sexual mechanisms have become utilized less for production and more for pleasure, and our national endorphin overdose has left us disoriented enough to argue that if Mom doesn’t say we can’t go skeet shooting with the good china, it must mean we can.

It is a puerile and pathetic argument, meant to guilt people into acquiescence, but since it is being entertained, we must ask whether it is true. In Mark, Jesus denounces divorce and describes marriage as explicitly “male and female.” In Matthew’s Gospel he does the same, but he says something more:

You can read the rest, here and find out where that goes.

While you’re at First Things, take a look at this film review of Terrence Malick’s To the Wonder, which has convinced me that I must see it.

Only through generous surrender to the other in the context of unshakable loyalty do we access the permeating love that surrounds us, the “divine presence” which is already within us. Transformation occurs not through activism, but through the right kind of passivity. Losing the fear of commitment is nothing more than acknowledging the reality of a love that never changes.

To the Wonder startles us into realizing that the world is shot though, positively charged, with presence. Whether that presence is fructifying love or slinking destruction stands as an accusing question throughout the film. The most frightening aspect of all is that it is our choice to accept the love that surrounds us, or to keep ourselves destructively closed off from it, and thereby spread fear and absence of life. Far from idealizing this moment of choice, To the Wonder understands that choice comes not in a moment of critical decision, but in a thousand moments that minutely move us toward one side or the other. To show the radically different possibilities Malick sets two characters side by side: Neil and the priest.

Yeah, you’ll want to read all of that, too

April 9, 2013
Baby Screaming After Gosnell Abortion: only of "local" interest
Next Post

April 9, 2013 Acts 4:32: Christian Commonality Ends Where Compulsion Begins UPDATED
Browse Our Archives
get the latest from
Catholic
Sign up for our newsletter
POPULAR AT PATHEOS Catholic
1

Benedict XVI Comes Out Of Retirement,...
Coffee & Crucifix
Related posts from The Anchoress

Catholic
2 Men Might Make a Lady, but Never...
The Anchoress
TRENDING AT PATHEOS Catholic