Wuerl: “Disagreement is not discrimination” 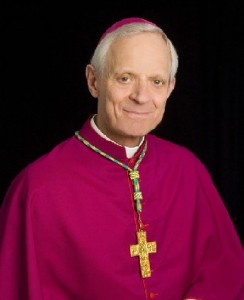 This is from April, but I only saw it last night, and the sentiments bear noting, so…

Recent laws enacted by the D.C. Council would have us believe otherwise. The Reproductive Health Non-Discrimination Amendment Act and the Human Rights Amendment Act purport to address “discrimination” by institutions such as ours, the Archdiocese of Washington and the Catholic University of America. The putative victims of this discrimination are people who part ways with church teaching about unborn life and sexual autonomy.
[…]
The church’s message, though, is one of mercy, not moral indifferentism. That is why we object to these two laws. They ask for much more than mercy and understanding. Consider again the reproductive health law. It forbids an employer to “discriminate against an individual” on the basis of her “reproductive health decision making.” Suppose your job is pro-life education in the archdiocese’s Department of Life Issues. We can imagine a woman who had an abortion working effectively in that office. (Dorothy Day, founder of the Catholic Worker movement and a great witness to life, had an abortion when she was 21.) But suppose you continue to believe that abortion was the right choice for you to make and honesty compels you to share that opinion with other women in your circumstances. A law forbidding discrimination on the basis of “reproductive health decision making” would seem to prevent the church from challenging or dismissing such an employee, even though she is working at odds with the mission of the office that hired her.

This is a piece full of common sense, which probably means few will understand it, because we appear to be living in a society that has moved beyond the ability to make thoughtful and clear distinctions. In this case, the point Wuerl and Garvey are making, isn’t even a fine or particularly nuanced one, but it still seems to escape many. Read the whole thing, to appreciate this: