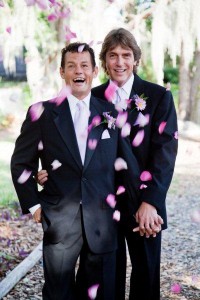 Still stuck in my writer’s block, the only way I could write a column this week for First Things was to format it as a playlet — a little one-act thing called “Suitable Recommendations” — wherein I try (and I have no idea whether I succeed) to showcase a story we’re increasingly seeing being played out as gay marriage becomes more common: the business owner whose conscience can’t let him or her provide services to a same-sex couple planning a wedding.

Gentleman: That’s some religion you’ve got there. Really? Jesus doesn’t want you to do flowers for my wedding? I don’t think Jesus could get behind this, because he would never be this hurtful! You’re betraying all the years we’ve known each other, and really hurting another person—two people; no, really a whole group of people—and then hiding behind Jesus; you’re letting Jesus take the blame for your hate. You have to hate me, because Jesus!

Florist: [Quietly] I don’t hate you.

Gentleman: Oh, this is what you call love? That’s some crazy kind of love; here, kid, have some cotton candy because I love you; oh, and don’t mind that razor blade I put inside! You’re rejecting me, you’re rejecting my marriage—it’s like you think I’m a second-class person.

Florist: Well, I don’t think that! I never could, and I wish you did not feel that way, because the last thing I want to do is to hurt you; that’s not what I want. Don’t you think that if I could make you happy, I would? It would be a lot easier for me to just set up your order and take your check, than to say “no” to you. In truth, I don’t especially want to say “no” to you. I want everyone to be happy and have just what they like; it’s why I’m so good at my job! But I can’t say “yes” to you, not if I’m being true to myself, and to what I believe God wants from me.

Gentleman: So, this is what you think God wants of you? He wants you to hurt people and tell them that their love and their families don’t matter? Well that’s news. I thought Jesus said we should love our neighbor as ourselves.

Florist: I don’t think God wants us to hurt each other. I think he wants us to live in truth, though. Jesus did tell us to love others as we love ourselves, but he said first and foremost to love God with all of our hearts and minds and souls. I know that’s hard to understand, because you don’t believe what I believe, which is that marriage is ordained by God, and meant to be between a man and a woman. That’s the truth.

Gentleman: That was truth a million years ago!

Gentleman: Times have changed, honey, you need to get with them. Whatever you think the Truth is, it’s not truer than love. God is love, right?

Gentleman: And we’re in love, and we just want to celebrate that and build our lives together. God is in all of that.

Florist: God is everywhere and in each of us, but that doesn’t mean we are always right with God. You’re saying God is love; I agree. What is love, though? Does love only say “yes”? Do I not love my son when I tell him not to touch a hot stove?

I linked to the actual stories, — the florist, by the way is being sued by the state for not selling to a gay wedding. I urge you to go read the thing and check out the comments section which is pretty interesting. Some people feel I made the gay man too sympathetic, some thing the florist is too sympathetic. So…I’ve managed to annoy almost everyone. As ever I’m more interested in the larger implications down the road. If states can sue someone who is trying to honor their own conscience, what does it mean for us as a church, later on?

I wanted to go a lot more deeply into the question but you know — it’s a column — I knew I was pushing First Things’ limits with 1400 words. Also, I didn’t have much time to invest in it. But I might revisit this — actually turn it into a project. It might be an interesting exercise for me to try writing further into each perspective, as I try to break my logjam!

July 17, 2013 Prayers for Critically Injured Thomas Peters - Lungs seem better
Browse Our Archives
get the latest from
Catholic
Sign up for our newsletter
POPULAR AT PATHEOS Catholic
1

Catholic
2 Men Might Make a Lady, but Never...
The Anchoress
TRENDING AT PATHEOS Catholic