Francis: A Big Brass Band of a Pope and Peter the Roman – UPDATED AGAIN

For years, I have been saying that each pope — each iteration of Peter — has his own style, which is why comparisons are always imperfect; a man’s nature informs his outreach. John Paul II was a trained actor and his papacy was like a giant, dramatic, nation-shaking pipe organ that could not be ignored. The shy and introverted Pope Benedict XVI, on the other hand, was like a tinkling piano, inviting you to come in be quiet and find some stillness. And the energetic, extroverted Pope Francis?

He is clearly a big brass band of a pope!

I just love that picture of him; look at his face! He looks like he’s found someone he hasn’t seen in a few years and is saying, “Hey, Marco! My Friend! Call me; we’ll have tapas!” I like to imagine him pantomiming a phone.

Some people are saying they’re worried about Francis’safety, but after some initial concerns I have decided that I’m not worried, because he is not worried. Just as, with his abdication, Benedict gave us a great lesson in trust, Francis is teaching us something.

Benedict always knew the papacy was not about him, and understanding that another speech, another trip would not make a difference — that people were not paying attention — he threw the entire church (and the world) into the path of the Holy Spirit, trusting completely that the God would not abandon her.

I would bet that Francis is the answer to Benedict’s prayers, because people are certainly paying attention, now; rapt attention. And we’re being given a deeper instruction in that lesson on trust. As I remarked to Sheila Liaugminas, last night, on her radio show:

I think he’s trying to teach us the same thing that Benedict was trying to teach us with his abdication, and that it’s about trust. . .you have Francis who is wandering into crowds. . .he’s in the little Ford Focus with the window down, he’s not in the popemobile with the bullet-proof glass, but the one that’s open on all sides, and I think he’s trying to teach us that, you know, maybe we’ve been a little too cautious; maybe we’ve been unintentionally adopting the world’s view of the world, since the [assassination attempt] of John Paul II. It was after that event that we told the pope, “you’re going to be behind this glass, and you’re going to be protected, and you’re going to be shielded”, but Peter was never shielded, and Peter is not meant to be shielded. Peter is meant to walk among the people and his shadow is meant to fall on them, and bring healing. Peter may end up being a martyr. He is called to give all of it — every single bit of it, every moment of his life — into the keeping and care of God; to simply go where he is led.

It is a lesson in profound trust, being delivered to Christians who well may need to learn it and internalize it and practice it — because their own lives of faith may yet bring them into unusual, dangerous situations. It is Francis embodying his own exhortation for us to make room for God to surprise us and to trust that whether the surprise seems “good” or “bad” to our perceptions, our allowing the surprise enables God’s own plan to unfold; a plan that is always, always for our good.

I’ve been amused by the harrumphs coming from some who have perhaps never harrumphed at a pope, before. But there is nothing to harrumph about in Francis and his outreach to the flock. In an increasingly impersonal digital age, where we call strangers our friends and ignore our families while we do it, I suspect we need a Peter who can bring the human touch; whose shadow falls upon the people, and brings healing. He repeatedly hits the theme about idols and idolatry — so often that I really believe the Holy Spirit wants us to understand, to be able to recognize how routinely and easily we place something before God (and hence, erect barriers between God and us) so we can break ourselves of the habit. He wants us to make a clearing amid all of our distractions and all of our stuff, so that we may find God when we seek him; so that God can reach us.

That’s something else Sheila and I talked about, also: how Francis is trying to create in us an awareness of our idolatry, because if we are aware of all the ways we create idols, we can prevail over them, and turn again to the One who saves.

When was the last (or the first) time you brought idolatry into the confessional, and admitted to breaking the first commandment? I can tell you truthfully, the very first time, for me, wasn’t until I was in the midst of writing my book. It’s been a part of every confession since then, because, awareness leads me to. Awareness of my own idolatry or the idolatry of others, comes to me every single day, now. And frankly, it has changed me; it has changed the way I see the world and the motivations of others.. It has changed my whole way of thinking, and being. The teaching of Benedict, the example of Francis, the awareness of the insidious way idolatry slithers into our lives and draws us from God; all of this has changed everything.

Not to freak out people who are susceptible to it, but our everyman pope…he’s kind of…Peter, the Roman, in touch with the cobblestones. He has a great deal to teach us, and it is every bit of it rooted in love of Christ and trust in his mercy. This is for all of us.

UPDATE:
By happy coincidence, Elizabeth Tenety is writing, today about the differences in style we see in Benedict and Francis and how some Catholics are processing that. Check it out. Our own Katrina Fernandez of The Crescat gets quoted a few times. A nice piece.

UPDATE II:
Heh! Francis and I continue our mind-meld. He confirms what I suspected:

“Security lies in trusting people. It’s true that there’s always the danger that a crazy person will try to do something, but there’s also the Lord,” he said. Sealing off a bishop behind bullet proof glass “is also craziness,” but he said he prefers the craziness of trust. 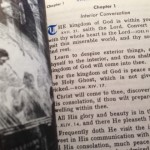 July 27, 2013 Too much earthly dross? Here's your Palate Cleanser
Browse Our Archives
Related posts from The Anchoress