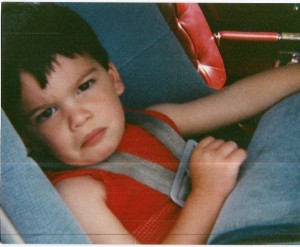 A month or so ago I was doing a book-signing — which, believe it or not, is actually a fun thing to do, even when you’re shy — and as people came up and we greeted each other, they would ask me to inscribe a copy of Strange Gods to “Mary” or “Anna” or “Joe”. About 60 books or so into it, I declared that I loved signing books for Catholics, because we tend to use rather conventional names of saints and also the conventional spellings.

So, naturally, the very next person in line asked me to inscribe the book to one of the most variable of Catholic names: Teresa-with-an-H-and-an-A-not-an-E, because Teresa is Theresa, not Therese.

Yes, after Theresa, I had Marc-with-a-C and Elizabeth-with-an-S (the very idea!)

I knew a girl in junior high school whose first name was completely unique and one-of-a-kind, created to honor four grandparents and a great-grandmother by using the first letter of each name. Her five-letter name was a constant sore point for her, particularly in a new school year when teachers would take attendance and dance around with the pronunciation until the poor kid finally had to pronounce it, and then explain it. Because back then, teachers were insensitive enough to ask, “what is that?”

Have you saddled your child with a name that needs constant spelling-out? Do your kids complain that their names are boring? One of my son’s friends rather defiantly took Athanasius as his Confirmation patron, solely to dress up his “plain” name. (Another, learning of Saint Blaise, wondered if he could get away with spelling it B-l-a-z-e and was very let-down to be refused. Because “Blaze” is a great name for a mixed martial artist, or something.)

Catholics, as a rule, do seem to be disinclined to Name their sons “Scatman” or their daughters “MaKallyn”, but Todd Aglialoro points out that we have other means of flying our freak flag:

A common tic of Catholic families that I have noticed (and have demonstrated myself) is to introduce or refer to their children by all their names. Instead of, “This is my oldest, Bill, his sister Sarah, and little Henry here just turned one,” we get, “Here’s Joan Clare Marie, her brother John Paul Aquinas de Sales, and I believe you’ve already met Michael Augustine Loyola Chesterton. We call him ‘Kolbe.’”

The middle name is a wonderful place to stash more obscure saint names or testaments to personal heroes (I’ve done it). And the temptation can be strong to keep the music going: One more heavenly patron can only be a good thing, right? Not to mention, you worked hard to make that baby and keep him alive; the least he can do is be a sort of walking billboard for your spiritual and historical interests.

But moderation, moderation. There’s a fine line between jolly plenty and wretched excess. Leave some names for the rest of us.

What do you think? Do you have any stories of strange names? By the way, the title of this piece is based on a real-name situation, but honestly…I can’t remember exactly how it was spelled. It might have had an F and two N’s. Poor kid.

October 11, 2013 Don't Assume People Know God Loves Them
Browse Our Archives
get the latest from
Catholic
Sign up for our newsletter
POPULAR AT PATHEOS Catholic
1

Thanks For Giving Us More COVID,...
A Little Bit of Nothing
Related posts from The Anchoress