Objective Truth is dead. It has been slain by human feelings — by a soft tyranny of sentimentalism which dictates that how a person feels about anything now defines its reality.

The last nail in the coffin of Objective Truth comes to us via the story of NAACP leader Rachel Dolezal, a white woman who is “trans-raced”. As such, she demands to be counted among the truly marginalized and victimized, and if that means helping things along, well, that might be alright, too:

“One’s racial identity is not a qualifying criteria or disqualifying standard for NAACP leadership.”
Dolezal came under scrutiny earlier this week when Spokane police raised questions about her claims of receiving threatening hate mail.
Dolezal’s parents are both white and said their daughter has publicly claimed that her adopted black brother is her own son.
The NAACP head told cops she found an envelope in the chapter’s post office box containing 20 pages of notes, including pictures of lynchings and the term “war pig.”
But a police investigation revealed the envelope was never canceled or timestamped, and was placed in a box accessible only to postal workers — or someone with a key.

We are living in transient times.

The most interesting and ironic thing about the End of Objective Truth is that it has been brought about (and celebrated) largely by people who have proudly, for some decades, eschewed the idea of faith and “bronze age oogedy boogedy”, for the world of hard facts and science. Often they will tell you that they do not believe in God because they live in a world buttressed by the (Catholic-invented) Scientific Method, and full of measurable, verifiable and quantitative data.

Now, it seems, Science is to be thrown into the dumpster, along with God. A life of faith, is for the naifs. Heaven is the safe-haven of the gullible, the under-educated, the unenlightened, and the narrow-minded, who are incapable of seeing a man as a woman, a healthy body as disabled and a white woman as a victimized black woman. And a life of Science, insisting that male-chromosomes, untamed by drugs, remain male chromosomes, that healthy bodies are in fact healthy, and that German-Swedish DNA is neither Nigerian nor Ethiopean, is just a life of bigoted mean-ness, a life that has no compassion for the reality of the human mind.

“Reality,” Robin Williams once mused, “what a concept.”

Mark it down, people. June 2015 is when the human animal declared “who the hell are God and Science to dare tell us what the truth is, anyway?” Faith in one’s feelings trumps both. Individual feelings are become a personal truth, and personal truth is absolute and unassailable reality.

“Only a Sith thinks in absolutes”, said Obi-Wan, and only mean people think in terms of Objective Truth. “I know what I know, and it’s the truth”; subjectivity is The New Absolute. The New Absolute is the Almighty Me, and what I AM.

I begin to understand why Tom McDonald worries that all of this trendy-transism will ultimately lead us to transhumanism: the ultimate marginalization away from boring humanity as we become like as gods.

Aware that I will be called all manner of intolerant for saying so — except by my friends who know better — I question whether feminists celebrating transexualism think it is truly in the best interests of women, to do so, particularly when a medically-rendered female can go into a boxing ring and beat the hell out of a natural women, or silence feminism’s long-beloved celebration of vaginas because — drugs aside — physiology matters.

So does the whole-life integrity of womanhood up from girlhood.

Racial minorities ought not be so fast to validate the aspirations of minority wannabees, because a white woman born to privilege, who has — despite her weaves and rows — never been followed around in a store, simply for being black, really has no idea. Co-opting the identity and heritage of an authentic victimization she has never experienced (and can literally walk away from, anytime she wants) is just plain insulting, isn’t it?

As to the trans-abled, well…having experienced the difficulties families face when wheelchairs and special needs are everyday realities, I could rightly wonder if their desire to be counted among the members might be insulting as well, except that some people have literally rendered themselves disabled; they can’t simply walk away from it by getting new hairdo or a new prescription. Physiology, again, matters.

And the ones who are simply wearing leg braces and using wheelchairs because they “feel” disabled? Well, if they are seeking acceptance-through-marginalization, there are no more compassionate people on the planet than folks who have had to deal, everyday, with a world full of challenges both natural and man-made; they might be too full of pity for such people to bother being insulted by them. 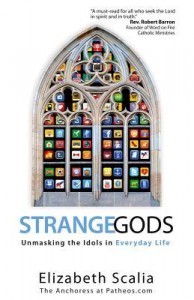 This trend of transism is idolatry, of course. Objective Truth sacrificed to the idol of the self. We have bitten deeply of the apple of Subjectivity, and as we have munched our way through it, we have found that our thoughts, our desires and our particular lives — consciously uncoupled from both religion and science, from faith and reason — really have made us into little godlings. We are in Eden, still, and needing rescue from ourselves.

Ideas create idols. . .We entertain our feelings with all our heart and all our soul and all our mind. Our feelings, desires, and convictions become our gods; and, exactly as strange gods are wont to do, they lead us astray, down circuitous paths that appear to be taking us somewhere but are forever leading us back into the dungeon of ourselves.
– Strange Gods: Unmasking the Idols in Everyday Life

What is the thing we carry within ourselves that brings us to a point where Objective Truth becomes for us a malleable thing, and what amid it drives us to actively, voluntarily marginalize ourselves against what we perceive to be the dominant culture, until we can claim a category of victimhood within that culture, as Dolezal has done? Is it a self-esteem issue, wherein one believes that marginalization helps one to stand out and be noticed?

Is it a need to be part of the zeitgeist and its emerging trends and heroes? Again, that’s a need to be noticed, to be “counted among”, to “belong” and to sit at the ever-needy cool kids table.

The problem with living for trends and margins is that eventually (and in this era, speedily) everything becomes normalized, and then, oh, woes, where is the specialness?

Truthfully, it has always been precisely before us, waiting for us to turn.

Related:
Monique Ocampo: If gender is a construct, why not race?

Thoughts on Roe Being Overturned
I have personally been hoping and praying for this result since I...
view all Catholic blogs
What Are Your Thoughts?leave a comment

One response to “TransRace, TransSex, TransAbled: Objective Truth and Self-Marginalization”