Mothers Who Work for the Church Need Our Support

Note: The following post was not authored by me. It was submitted by a personal friend who asked to remain anonymous.

I always thought that working at a Catholic Church and having children would be the dream. However, after having my first, a daughter, I’ve found that the dream isn’t what I thought it would be.

I work as a Director of Religious Education at a large metropolitan parish with over 6,000 registered families. Needless to say, my job entails a lot of different responsibilities. I gave birth just before Easter, which meant that I was on leave for, arguably, the busiest time of year for my department. I did everything that I could before I went on leave (including working from home as I labored before going to the hospital) to ensure that things would be taken care of and in order while I was gone.

I returned after just under six weeks of leave. I chose to use all of my sick time during my leave so that I could get paid. (Side note: my parish actually had to figure out what the policy for leave was when I became pregnant. They nearly made the decision to force me to use all of my vacation AND sick time on my leave. Fortunately, they let me decide how much, if any, of my vacation/sick time to use.) My first day back was actually pretty fun. My coworkers were excited to see me again and to see my daughter. That ‘fun’ feeling only lasted for that first day.

Before my maternity leave began I worked out an arrangement with my boss, the pastor, that I would return to work after 6 weeks, so long as I could bring my daughter with me until my husband, a teacher, finished teaching for the school year. This plan was then communicated to the staff. I hoped and believed that since the Church is a pro-life, pro-family organization, returning to work with my daughter in tow would be accepted and respected, especially since the pastor endorsed this plan. What I was met with in those first few weeks surprised me.

I attended a staff meeting (with my daughter sleeping as I wore her) in which the staff were told by the pastor that we are not allowed to deal with “personal” things while at work. I understand the idea, but my daughter is there – per my pre-arranged agreement with my boss. Coworkers began making comments about how much work I was or was not getting done. Sometimes they made them to my face, other times they made them not knowing I could hear what they were saying. I was shocked and hurt, to say the very least.

Among the most shocking days was when I arrived to work and another coworker began a very blunt conversation with me about how I should not and could not close my office door and cover the window on my office door while I nursed my daughter. I informed her of laws protecting working mothers who are to be given a space to express milk that is not a bathroom. Since there are no such rooms in our parish, I covered the window to my office door and called it good. She vehemently disagreed and the conversation only ended because I walked away.

The fact of the matter is that going back to work six weeks after giving birth is incredibly difficult – more so than I imagined it would be. I’m grateful that I get to bring my daughter with me, but at the same time, I feel divided. I love my job and want to keep working, but I love my daughter and don’t want to miss a second of her development. My job is a job – a great job working with children and introducing them to Jesus. But my life as wife and mother is a vocation and that’s not going to change. Jobs come and go, but this vocation is here to stay.

Harder still is going back to work only to be met with judgment, rude comments and unsupportive coworkers. I could have taken a longer maternity leave, but I didn’t. I felt some sort of Catholic guilt at the thought of my work being put on someone else’s shoulders should I extend my leave (which I could have done, per FMLA, though it would have been unpaid). I didn’t and don’t expect to be lauded for doing my job, but I do hope for and expect at least a modicum of respect in the workplace.

It is interesting, though, that people want to see and play with my daughter, but are also completely okay with questioning my work, talking behind my back and telling me how I’m breaking work policy (I’m not) and that I should just find a closet to breastfeed/pump in (there are none into which I can fit). If given the choice, would my coworkers rather I have extended my leave, thus putting my work on their shoulders? I think not.

As I’ve been reflecting on all of this, I’ve realized that there is a disconnect between priests (who are the boss) and lay employees. Priests have their vocation as their job – they are tied up into the same thing. They married the Church. They married ministry. Lay people, however, are not married to the Church, they are married to a spouse. Lay people are not married to ministry, they have a spouse and children to look after and care for. In no way is that meant to disrespect priests or their vocation, but I think it makes it harder for priests to relate to or understand the struggle their lay employees (especially working mothers) face. That disconnect then trickles ‘downhill’, so to speak, with the other employees. Since, more often than not, priests struggle to understand the plight of a working mother, the other employees lack a clear example of what it is like to support rather than tear down a working mother.

There are, as far as I can see, no easy answers here. The options are:

1. Return to work as soon as possible which would put my infant in childcare OR in my office (leading to the aforementioned workplace strife).

2. Extend my unpaid leave, strain my family financially and put my workload on my coworkers.

3. Hire someone to fill in for me while I’m gone (who would’ve had little to no training), thus potentially straining the parish finances.

4. Allow me to bring my daughter to work while supporting me in my efforts to balance my vocation as wife and mother with my job responsibilities.

In a sense, there is an easy answer, but no one seems to be choosing it in my situation. That support could be as simple as the pastor, at our usual staff meeting, informing/reminding the staff that he and I have come to this agreement and telling the staff that if they have any questions, they can take them up with him, otherwise they would do well to be quiet about it. Perhaps he could even remind them that this is the Catholic Church, a pro-life, pro-woman, pro-family entity.

Instead, I’ve been met with annoyed coworkers, snide comments and made to feel shame for breastfeeding my child. After my first few weeks back, I remarked to my husband that if my faith were shaky such treatment inside the walls of a parish would seriously make me question my faith. I wouldn’t wish that on any working mother, whether she works for the Church or not, especially when more can and should be done to support a working mother.

[Note from Admin: What do you think can be done in our parish environments to encourage more support for working mothers, whether they work for the church or elsewhere? Please leave your thoughts in the combox!]

Go Ahead. Take Down Statues of...
Public Catholic
Related posts from The Catholic Working Mother 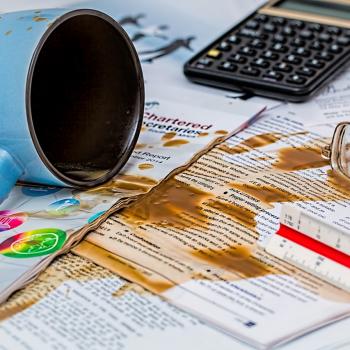