It Is Impossible to Use NFP with a Contraceptive Mentality

It Is Impossible to Use NFP with a Contraceptive Mentality March 29, 2018 JoAnna Wahlund

The term “contraceptive mentality” has a very specific meaning in Catholic theology.

It does not mean using NFP to avoid pregnancy for allegedly selfish or frivolous reasons.

It means the desire to divorce procreation from sex — you know, like actual contraception does — and thus strengthen the temptation to abort any children who are inadvertently conceived. Hence the term contraceptive mentality.

The whole reason that NFP is even licit to use to avoid pregnancy in Catholic teaching is entirely because NFP does not divorce procreation from sex.

Otherwise, it would be considered an intrinsic evil that Catholics may never use to avoid pregnancy, just like contraception.

It is frequently asserted that contraception, if made safe and available to all, is the most effective remedy against abortion. The Catholic Church is then accused of actually promoting abortion, because she obstinately continues to teach the moral unlawfulness of contraception. When looked at carefully, this objection is clearly unfounded. It may be that many people use contraception with a view to excluding the subsequent temptation of abortion. But the negative values inherent in the “contraceptive mentality”-which is very different from responsible parenthood, lived in respect for the full truth of the conjugal act-are such that they in fact strengthen this temptation when an unwanted life is conceived. Indeed, the pro- abortion culture is especially strong precisely where the Church’s teaching on contraception is rejected. Certainly, from the moral point of view contraception and abortion are specifically different evils: the former contradicts the full truth of the sexual act as the proper expression of conjugal love, while the latter destroys the life of a human being; the former is opposed to the virtue of chastity in marriage, the latter is opposed to the virtue of justice and directly violates the divine commandment “You shall not kill”.

With regard to physical, economic, psychological and social conditions, responsible parenthood is exercised by those who prudently and generously decide to have more children, and by those who, for serious reasons and with due respect to moral precepts, decide not to have additional children for either a certain or an indefinite period of time.

HV goes on to give a very specific definition of contraception in paragraph 14:

…any action which, either in anticipation of the conjugal act [sexual intercourse], or in its accomplishment, or in the development of its natural consequences, proposes, whether as an end or as a means, to render procreation impossible.”

NFP is not an action (abstinence is the lack of an action), nor is it possible for it to render procreation impossible, so it clearly does not fit this definition and cannot be considered contraceptive.

In paragraph 16, HV explains why NFP may be used to avoid pregnancy, and also explains why contraception may not be used (emphasis mine):

Neither the Church nor her doctrine is inconsistent when she considers it lawful for married people to take advantage of the infertile period but condemns as always unlawful the use of means which directly prevent conception, even when the reasons given for the later practice may appear to be upright and serious. In reality, these two cases are completely different. In the former the married couple rightly use a faculty provided them by nature. In the later they obstruct the natural development of the generative process. It cannot be denied that in each case the married couple, for acceptable reasons, are both perfectly clear in their intention to avoid children and wish to make sure that none will result. But it is equally true that it is exclusively in the former case that husband and wife are ready to abstain from intercourse during the fertile period as often as for reasonable motives the birth of another child is not desirable. And when the infertile period recurs, they use their married intimacy to express their mutual love and safeguard their fidelity toward one another. In doing this they certainly give proof of a true and authentic love.” 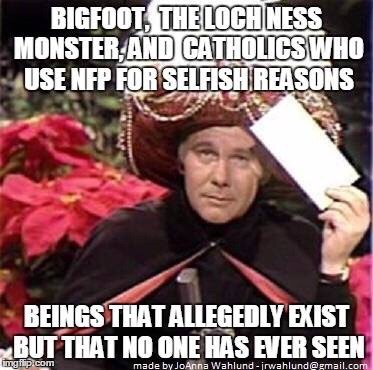 Using NFP to avoid pregnancy is often very difficult and frustrating. It requires heroic self-control and self-denial — both characteristics that are the antithesis of selfishness. In a way, this is a feature, not a bug. Self-control usually crumbles in the face of insufficient (i.e., selfish) motivation.

And even if there was that unicorn Catholic couple who were simultaneously devoted to and also completely oblivious to the Church’s teachings on responsible parenthood that they did use NFP to avoid pregnancy for selfish reasons — it actually isn’t an intrinsic evil to do so. Sinful, perhaps, but not intrinsically evil.

But it is an intrinsic evil to contracept.

Which makes you wonder why there are those who insist on policing the NFP use of their fellow Catholics while tacitly ignoring the 98% of Catholics who use contraception.

At any rate, the “contraceptive mentality” is not and cannot be present among NFP-using Catholics — and the sooner we stamp out that ridiculous notion, the better. 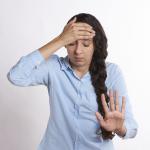 March 23, 2018
How Not to Win Friends and Influence People
Next Post 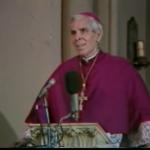 March 30, 2018 Watch Bp. Fulton Sheen's "His Last Words"
Recent Comments
0 | Leave a Comment
Browse Our Archives
get the latest from
Catholic
Sign up for our newsletter
POPULAR AT PATHEOS Catholic
1