Virginia is for lovers and North Carolina is for the narrow-minded, judgmental, deceptive, and manipulative…

Virginia is for lovers and North Carolina is for the narrow-minded, judgmental, deceptive, and manipulative… June 10, 2012 Katrina Fernandez 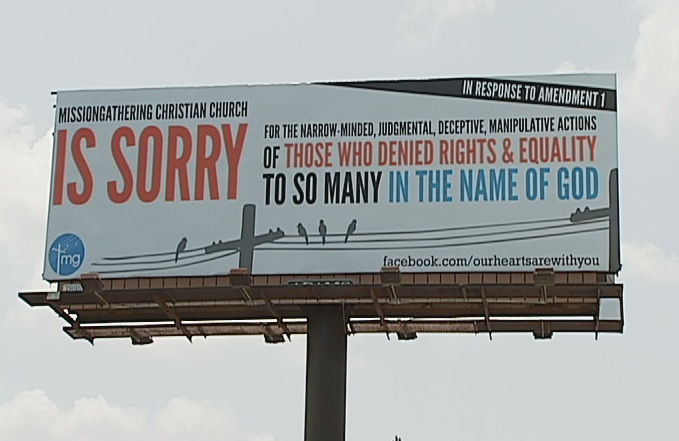 Then what does that make California then, besides the land of fruits and nuts.

CHARLOTTE, NC (WBTV) – A California church says “sorry” to people in North Carolina after the state passed Amendment One, recognizing marriage as only between a man and a woman.

The billboard, sponsored by the Missiongathering Christian Church in San Diego, appeared for the first time on Wednesday. The church apologizes for what it calls “the narrow-minded, judgmental, deceptive, manipulative actions of those who denied rights and equality to so many in the Name of God.” [SOURCE]

I’m sorry, how many Californians voted for Proposition 8 again? Seven plus million or 52%. What was that you were saying about North Carolinians. I guess Washington state is full of haters too then.

It really is a tired argument. Heck, it’s not really an argument at all. It’s a child who resorts to name calling when they don’t get their way or have their feeling hurt.

June 10, 2012 A typical Sunday night, or what happens when I don't give blog a curfew...
Recent Comments
5 Comments | Leave a Comment
Browse Our Archives
get the latest from
Catholic
Sign up for our newsletter
POPULAR AT PATHEOS Catholic
1

Catholic
Diocese of TN Presents "Conversations with the Cardinals"...
The Crescat
TRENDING AT PATHEOS Catholic