… In case you weren’t aware, it’s hot outside. Make-up melting, hair frizzing, miserably hot outside. What is causing this doom inducing change in the atmosphere, you may be asking. Why it’s a little thing that happens every year around this time called summer. 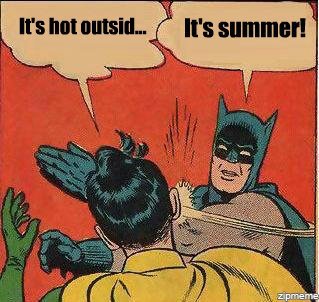 So please, no need to get alarmed. The hot weather is not an indication that the end is nigh or the Mayans were right, or that Al Gore is any less bat shit crazy.

Rings in fossilised pine trees have proven that the world was much warmer than previously thought – and the earth has been slowly COOLING for 2,000 years. Measurements stretching back to 138BC prove that the Earth is slowly cooling due to changes in the distance between the Earth and the sun. The finding may force scientists to rethink current theories of the impact of global warming.

It is the first time that researchers have been able to accurately measure trends in global temperature over the last two millennia. Over that time, the world has been getting cooler – and previous estimates, used as the basis for current climate science, are wrong. Their findings demonstrate that this trend involves a cooling of -0.3°C per millennium due to gradual changes to the position of the sun and an increase in the distance between the Earth and the sun.

‘We found that previous estimates of historical temperatures during the Roman era and the Middle Ages were too low,’ says Esper. ‘Such findings are also significant with regard to climate policy, as they will influence the way today’s climate changes are seen in context of historical warm periods.’ [Read More]

ps- I’m not a real scientist or climatologist, I only play one on the internet.

July 11, 2012
Firefly getting reunion TV special, and the people rejoiced...
Next Post

July 12, 2012 the white dove and Cardinal Eugênio Sales ...
Recent Comments
0 | Leave a Comment
Browse Our Archives
get the latest from
Catholic
Sign up for our newsletter
POPULAR AT PATHEOS Catholic
1