… Speaking of anxiety inducing, apocalyptic urban myths. The idea that the world is overpopulated is just not so.

Or if you wanted to take everyone in the entire world and stick them in one city, the density per square mile would look something like this… 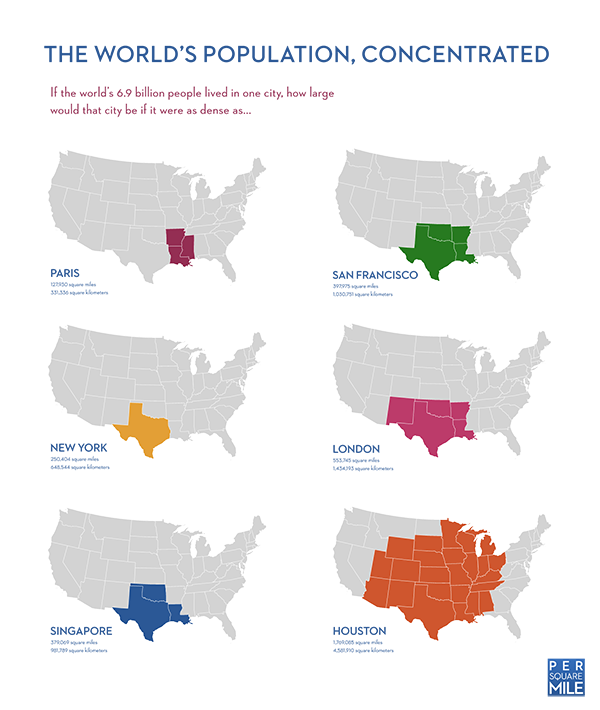 Cute videos and simple graphics aside, let’s consult Science and consider our sources. Paul Ehrlich re-introduced the idea of over population in 1968 with his book, “The Population Bomb.” His theory, along with Thomas Malthus’s idea about population growth getting checked by famine and disease [An Essay on the Principle of Population] are just that; theories. Lack of food is not a population problem but rather the need for more efficient distribution. You have to understand the source from where these theories came from. Malthus was a cat who had some grand ideas about Utopian societies and selective breeding. Sound familiar? Ehrlich theories take on a much more nefarious tone…

“We must have population control at home, hopefully through a system of incentives and penalties, but by compulsion if voluntary methods fail. We must use our political power to push other countries into programs which combine agricultural development and population control.”

He is also not opposed to mandatory population control if necessary, including the suspension of food aid to countries which were considered “hopeless” to feed their populations. Sounds like a charming and compassion gent, no?

The plain and simple truth is that depopulation is more likely to cause economic distress. As the fertility rate continues to dramatically fall, in many cases below replacing rate [China, anyone?], the myth of overpopulation becomes more and more exposed for what it is; eugenics disguised as environmental concern and false interest in the well being of the poor. Poverty, disease, and starvation will not be solved by thinning out the population, targeting minorities for abortion, and mandating free government birth control.

If anything, we should be encouraging fertility and large families. From an economic viewpoint, consumers are the largest component of gross domestic product [GDP]. When the GDP drops the whole economy suffers. Labor shortages halt productivity while consumers and tax payers simply cease to exist to financially support the economy. Without babies, and lots of them, you are pitifully left with an aging population causing generational bankruptcy of government spending. Social Security and Medicare are unsustainable without new generations of taxpaying workers.

In short, people are a good thing. Be fruitful and multiple. Live long and prosper.

July 12, 2012 The National Catholic Reporter tweeted today...
Recent Comments
0 | Leave a Comment
Browse Our Archives
get the latest from
Catholic
Sign up for our newsletter
POPULAR AT PATHEOS Catholic
1 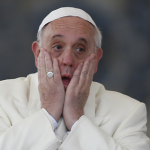