Pro-Abortion Politician Writes Self Appeasing Rubbish About Her Excommunication…

… Someone once asked me if I struggled with any of the Church’s teachings? My reply was plain.

If I did you wouldn’t know about it.

But what if your struggle could help others who were working through the same issues?

Maybe if I had reached a satisfactory understanding and wanted to share with someone the misconceptions I was under and how it was resolved. Maybe.

But really. If I am struggling with anything contrary to what the Church teaches I will not share them here or even with a close friend.

Those doubts and questions are left best to God and a wise spiritual director. Because getting any more voices than necessary involved complicates things.

And that’s just if you’re a regular ole pew sitter like me. Imagine my response if you held a position of influence. Say politician. Or celebrity. Or some other public figure.

Then it becomes your duty to keep your personal issues to yourself to avoid the spread of doubt and ignorance. And if you don’t…

If you actively and very publicly work to undermine and contradict the Church’s teaches, deliberately refusing to seek a fuller understanding and reconciliation … well…

I suppose you find yourself excommunicated and writing self appeasing horseshit for HuffPo Religion. And running for Congress of course.

Kelly Kultala, a candidate to represent Kansas’ third congressional district in the U.S. Congress, writes about being called for excommunication for being a pro-abortion Catholic, her husband’s illness, praying by a reflecting pool, 1970-80’s Catholicism, the feels, her shock at the Hobby Lobby ruling, and how we – obedient Catholics – have hijacked “her” faith.

What she doesn’t take the time to write about is what the Church actually teaches on life issues. Issues she finds herself in contradiction of.

If she had only put as much effort into researching the Catechism of “her” faith as she did in writing this emotionally charged twaddle for Huffpo.

On My Excommunication, by Kelly Kultala

With this week’s Supreme Court ruling in the Hobby Lobby case bringing the intersection of faith and politics to the forefront of the national discussion, I feel compelled to respond to another intersection of the two in my home county. Last week I was outraged when the Republican Party county chair called for me to be excommunicated because I am a pro-choice Catholic. It was stunning because it is among my deepest beliefs that it is not one’s place to judge another’s faith.

The Catholic Church I grew up in during the ’60s and ’70s shared President John F. Kennedy’s vision of faith and community. It taught me to ask not what my community can do for me but what I can do for those who are hurting, lost, and in need. The peace that sustained me through Dan’s darkest days could not have been possible without the help of countless others in our faith community who share that understanding.

I refuse to sit by silently and allow the faith I grew up with to be hijacked by a crowd that believes they have the dominion to judge whether others are faithful enough or Catholic enough. Pope Francis has said, “I see clearly that the thing the church needs most today is the ability to heal wounds and to warm the hearts of the faithful; it needs nearness, proximity.” Faith is about caring for those in greater need than ourselves; it’s not a mechanism for casting stones. I ask that if you support my vision of faith, please consider supporting my campaign for Congress.

When you publicly promote the exact opposite of what the Church teaches and refuse to reconcile yourself with those issues than you kind of leave yourself open for judgement. And excommunication.

And Pope Francis is staunchly pro-life… you know, if your going to go around quoting him and junk.

Here’s what the Church has to say about “her” religion. Psst. It’s the exact opposite of what she thinks it says.

2270 Human life must be respected and protected absolutely from the moment of conception. From the first moment of his existence, a human being must be recognized as having the rights of a person — among which is the inviolable right of every innocent being to life.(71)

2272 Formal co-operation in an abortion constitutes a grave offence. The Church attaches the canonical penalty of excommunication to this crime against human life. 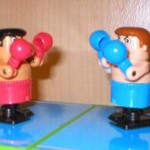 July 7, 2014 Was it Something I Said...
Recent Comments
0 | Leave a Comment
"Pithy and so, so, true. If it were possible, I'd post a million of these ..."
Vicky Hernandez #whyIstayed Why Women Stay In Domestically ..."
"All the best to you, Katrina! We'll miss you. Thanks for sharing your journey with ..."
Lori Ten Years is a Long Run…
"Bon voyage on your new endeavours. And thank you."
Cordelia Ten Years is a Long Run…
"I will miss your unique, funny, honest voice. Thank you for all the years of ..."
Jim Vogel Ten Years is a Long Run…
Browse Our Archives
get the latest from
Catholic
Sign up for our newsletter
POPULAR AT PATHEOS Catholic
1