Overlooked and Dismissed During the Synod, How Single Parents Continue to be Regarded in the Church…

Well, the Extraordinary Synod for the Family, has ended, and not surprisingly single parents have gotten the same sort of polite inattention from the Catholic bishops that we are used to getting in the pews.

Special attention should be given to the accompaniment of single-parent families, in a particular way to help women who have to carry alone the responsibility of the home and raising children.

That vague-sounding one line was all the consideration single parents saw in the final relatio. Thank you for that, now we can go back to subsisting on the crumbs from the masters table, while the “divorced-and-remarried” and the “gifted gay Catholics” enjoy all kinds of concerned hand-writing from the hierarchy and, for that matter, from the secular press.

That one single line of attention given to such a large, hugely ignored faction of the Church is almost patronizing, like “oh, yeah, those people also; we are mentioning them here, so that base is covered.”

I don’t think another special interest group for single parents is the answer. It’s nice to commiserate, but I can’t think of anything more depressing than a group of single people sitting around talking about how single they are.

What I’m simply proposing is a little more recognition — a blurb in the bulletin, a priestly mention in the prayer intentions during mass, a homily or two about saints who were raised by single parents or were single parents themselves, and lastly, when speaking of families in general, recognize that single parents and their children are indeed still very much families.

Single parents work all day, and spend all evening taking care of our children, so we don’t have the time or resources to rally on our own behalf; in fact, we shouldn’t have to. We shouldn’t be protesting and writing articles on the internet about how we’ve gotten overlooked yet again. The Church should be aware of our existence at this point, recognize our growing numbers, and be there to offer the support we desperately need. At the very least acknowledge, that we exist.

Honestly, it’s just about being seen. That’s all it’s ever been about.

Every single parent has heard the statistics that their children are at a higher risk for lower grades and a life of crime, what we need to hear is some encouragement. I’ve met priests raised by single mothers who’ve mentioned that fact almost apologetically. To them I say, share your story with your parishioners. Give us some hope and encouragement. 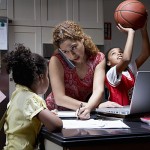