… So there’s this video of the Eucharist getting passed around like a common snack chip at the papal mass during the pope’s visit to the Philippines.

Even when I was a simple protestant we had more respect for the symbol of communion than some Catholics have for the reality of it.

In the past, as a member of a local non-denominational community church we only had communion on special occasions and it was a very big deal to us. Granted it was a very big symbolic deal, but still one we treated with respect because of what is symbolized.

And then you got some Catholics, who treat the reality of Christ’s presence in the Eucharist like… well, like this. 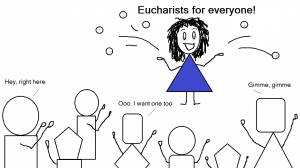 There’s nothing in the GIRM or CCC or anywhere else that says, “Hey, lets distribute the Eucharist to thousands of people all at once. What could possibly go wrong?”

We really need to get over this idea that we deserve to receive the Eucharist at every mass, whether it’s out of a sense of entitlement or belief that we aren’t “actively participating” if we don’t. There’s absolutely no excuse for things like this to happen because there’s absolutely no reason to have Communion during these types of large masses. 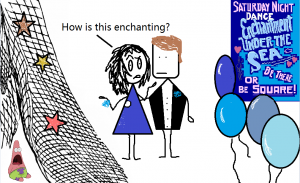 Catholic
Places Where It's Acceptable to Celebrate Using a...
The Crescat
TRENDING AT PATHEOS Catholic