Why I am Glad My Family Quietly Suspected I Was A Lesbian… August 5, 2015 Katrina Fernandez

… In college my best friend and I decided to shave our heads. I wish I could say it was done in defiance of unrealistic standards of beauty, feminist power, riot grrrl angst, or even a raging case of head lice. Nope, if memories recalls correctly, I shaved my head because I really, really liked this boy who played bass guitar in a straight edge band.

Surprisingly, this was not the worst of my fashion offenses. 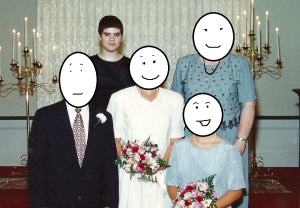 Maybe it’s the setting (a family wedding) that makes this look like a painfully awkward family photo, but mostly I think it’s just they way I stick out looking strangely androgynous. No wonder my family thought I was a lesbian for so many years. I’m sure all that rugby playing didn’t help opinions either.

I recall 19 year old me being clumsy, clunky, awkward and not in the least bit feminine. I didn’t know how to maneuver about in my new post-adolescent body and I had a very limited concept of femininity and womanhood. It wasn’t until my mid-twenties did I emotionally and physically catch up to my chronological age.

If the climate then was as it is now, I could have been entirely convinced that I was in fact a lesbian. I didn’t like make-up or dresses and I kind of like-liked girls, but not as much I was really really liked boys, but I still liked them none the less. The point being… I was a totally confused kid, even though I was a legal adult.

So when you tell me a four year old boys gender identifies as female because he likes pink and Barbies and says, “Mommy, I wish I was a girl and I’d be happier as a girl”, just remember growing up and developing into the adults we are to become takes a very long time.

When I read stories like this – Transgender Teen Freezes Eggs Before Transitioning Into Man – I see a confused 18 year old girl/child whose underlying issues are probably being ignored but who is definitely not being allowed to fully mature into an adult before doctors start tampering with her sexuality and biological chemistry. No doctor, with their patient’s best interest in mind, should even consider hormone therapy or gender reassignment surgery on anyone younger than twenty five.

A four year old, hell even a eighteen year old, is still in the early stages of development. Puberty can last up to 20 in some boys, and around 18 in girls.

Between the ages of 10 and 25, the brain goes through cognitive changes that have important implications on behavior.

Basically, we need to leave kids alone and let them go about the business of fully maturing. We do children and young adults, yes adults, a major disservice by encouraging them to alter their sexuality before they are even fully developed – sexually, emotionally, cognitively, psychologically, and physically.

I’m glad my family quietly suspected I was a lesbian all those years. They never once approached me with well-meaning suggestions to investigate or embrace the gay lifestyle. While they never gave any indication that they would have loved me any less if I were gay, they respected me enough to know I was a punk kid that needed to grow up first. Because of that they kept their suspicions to themselves and left me alone to grow into the woman I am now without interference and misplaced “acceptance.”

They also never batted at an eye at my mo-hawk, God bless ’em.

August 9, 2015 St. Maria Goretti Relic Tour Schedule...
Recent Comments
0 | Leave a Comment
Browse Our Archives
get the latest from
Catholic
Sign up for our newsletter
POPULAR AT PATHEOS Catholic
1

How White Men Lost the Meaning...
suspended in her jar
Related posts from The Crescat