“The church that is in Babylon, elected together with you, saluteth you: and so doth my son Mark.”

In an older post, I had discussed the meaning of the reference to ‘Babylon’ in 1 Peter 5:13, and included the three most common interpretations of the text.  The first, that it is a cryptic reference to Rome, is the oldest, has the support of ancient writers, and is the one favored by the majority of scholars today.  The second interpretation argues for the literal Babylon in Mesopotamia, while the third suggests that it refers to a military base in Egypt.  A concise argument for the first by Stephen J. Davis in his book The Early Coptic Papacy: The Egyptian Church and its Leadership in Late Antiquity was offered, as well as the testimonies of Papias of Hierapolis (d. ca. A.D. 130), Eusebius of Caesarea (d. A.D. 339), and also Jerome (d. 420).  It was noted too that Erasmus of Rotterdam (d. 1536) was the first writer on record to question the fact that the reference to ‘Babylon’ in 1 Peter 5:13 signified the imperial capital [in keeping with Renaissance skepticism].  What follows then is a rehashing of the three interpretations, with further insight from two additional twentieth century (non-Catholic) scholars; Oscar Cullmann and Daniel O’Connor.[1]  These will follow in order from what seems to be the least to the to the most probable, so far as purely historical arguments go.

An Egyptian Military Base

The first author to put forward the idea that the ‘Babylon’ mentioned in 1 Peter was a reference to a military base on the Nile appears to be the French scholar Théodore Reinach (d. 1928).[2]  As O’Connor notes, the Greek Geographer Strabo (d. A.D. 23) refers to this encampment, but O’Connor suggests that it was relatively insignificant in the first century.[3]  In any event, in Book XVII in The Geography of Strabo, we read:

“In sailing up the river we meet with Babylon, a strong fortress, built by some Babylonians who had taken refuge there, and had obtained permission from the [Egyptian] kings to establish a settlement in that place. At present it is an encampment for one of the three legions which garrison Egypt”.[4]

Ultimately, however, O’Connor concludes that “since there is no clear evidence tending in this direction [i.e. that ‘Babylon’ in 1 Peter refers to this base], it is not to be taken seriously”.[5]  He agrees with Cullmann who wrote that “one can scarcely accept…the misguided idea that I Peter 5:13 refers to this rather obscure Babylon”.[6]  Finally, it was said previously that for his part, Leo Davis also dismissed this idea for lack of evidence.

This second position is arguably more defensible than the previous, but that is not saying much.  For example, it is given as a possible interpretation in Dallas Theological Seminary’s The Bible Knowledge Commentary: New Testament, though the author favors the traditional view that it refers to Rome.[7]  Additionally, it does find some support in the relatively late and “highly suspect” apocryphal Acts of Philip (4th c.).[8]  Nevertheless, as O’Connor notes, “the evidence indicates that it is very doubtful whether Peter worked in this area, especially in light of the notation in the Talmud to the effect that Christians did not live in the vicinity until the third century”.[9]  Based on similar arguments, Cullmann concluded that while the idea “cannot [be] completely exclude[d]…, it is not probable, and is not supported by later Christian tradition, which knows nothing of a missionary work of Peter in these regions”.[10]  Davis is of the same opinion.[11]

‘Babylon’ as a Code Word for Rome

As previously stated, this is the traditional view which finds ample support in the Early Church Fathers, and was uncontested up until the time of Erasmus of Rotterdam (d. 1536).[12]  It is also the view favored by the vast majority of scholars today.[13]  Furthermore, this position accords with the utilization of ‘Babylon’ as a code word for Rome in The Book of Revelation (14:8; 16:19; 17:5; 18:2), as well as in various Jewish pseudepigraphal works.[14]  Cullmann remarks that “the interpretation that the word ‘Babylon’ in 1 Peter 5:13 refers to Rome is doubtless the most natural, if we approach the passage without prejudice and without first taking into account the controversy concerning Peter’s stay in Rome”.[15]  O’Connor similarly concludes that “since it is fairly obvious, however, that ‘Babylon’ in [1 Peter] 5:13 is a cryptic term for Rome, it may be said with confidence that by the end of the first century the tradition existed that Peter had lived in Rome and that he had written an epistle while there”.[16]  This scholarly consensus is reflected in the Encyclopedia Britannica’s entry “St. Peter the Apostle”, which states:  “If Peter did write 1 Peter, the mention of ‘Babylon’ in 5:13 is fairly reliable evidence that Peter resided at some time in the capital city. If Peter was not the author of the first epistle that bears his name, the presence of this cryptic reference witnesses at least to a tradition of the late 1st or early 2nd century”.  Here, of course, the focus seems to be on authorship and Peter’s Roman sojourn, with the understanding that 1 Peter 5:13 refers to the Eternal City as a given.  Therefore, a minority of objectors from the time of the Reformation until the present notwithstanding, the question appears to be more or less settled on strictly historical grounds.

[8] “Here Philip is reported to have gone to the region of the Parthians and to have come upon Peter there.  According to the oldest tradition, however, the apostle to the Parthians is Thomas”.   O’Connor, Peter in Rome, 16.

Catholic
Does 1 Corinthians 10 prove that St. Peter...
The Crossroads

Catholic
The "Ascension of Isaiah" and the Martyrdom of...
The Crossroads 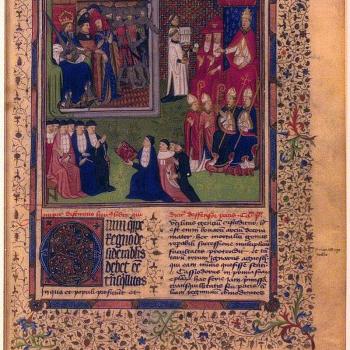 Catholic
The Origins of the Denial of Peter’s Roman...
The Crossroads

Catholic
Mary, Mother of God and the Council of...
The Crossroads
TRENDING AT PATHEOS Catholic