The Origins of the Denial of Peter’s Roman Sojourn

For the first thirteen centuries of Christianity it was accepted as a given that the Apostle Peter, before the end of his life, came to Rome, labored there for a period, and ultimately was martyred there.  It was not until the advent of the Waldensian sect in the High Middle Ages that the first doubts on this question were expressed, and this seemingly in connection with their assertion that the Sacred Scriptures were the only means for determining Christian faith and practice.[1]  Though an examination of the literary evidence is beyond the scope of this post, it should be noted that the New Testament itself does allude to this fact, albeit in a cryptic way in 1 Peter 5:13.[2]

The argument from silence expressed by the Waldensians was echoed by Marsilius of Padua in his fourteenth century political work entitled Defensor pacis (The Defender of the Peace).[3]  In the early sixteenth century, an explicit denial of Peter’s Roman sojourn was expressed in an anonymous work published under the pseudonym Ulricus Venelus Minhoniensis.[4]  Jumping ahead to the twentieth century, the scholarly consensus favored an affirmation of the ancient tradition.[5]  Here it seems to remain at present.

Marsilius of Padua and the Defensor pacis

Marsilius was born in Padua in northern Italy ca. 1275, later becoming the rector of the University of Paris around the year 1313.  In the conflict between the German Emperor Henry VII (and later Ludwig IV) and the papacy over their political activity in northern Italy, Marsilius sided with the former, which placed him within the Ghibelline camp regarding the controversy.  Marsilius left Paris for Nuremburg in 1326, and after 1328 spent the remainder of his life in the service of Ludwig IV at the imperial court in Munich.  This then is the political backdrop to the Defensor pacis (1324).[6]

The work consists of three Discourses, and it is in the second where the author expressed doubts pertaining to the Apostle Peter’s stay in Rome.  In chapter 16 (section 16) we read the following:

“Since, therefore, it is plain and agreed from Scripture that Paul was at Rome for two years, and there received all the gentiles who wished to convert and preached to them, it is certain that he was the bishop of Rome specifically, since he carried out the office of a pastor there, holding the authority for this from Christ, the commandment by revelation, and the consent of the other apostles by election.  Whereas with regard to Saint Peter (and in this the second of our propositions will become apparent), I say that it cannot be convincingly established on the basis of Holy Scripture that he was the Roman bishop specifically; and what is more, that he was ever at Rome.”[7]

In the previous section, he had argued [rather unconvincingly] that “the Roman bishops are more the successors of the apostle Paul than of Peter, especially in the episcopal see of Rome.”[8]  In the above text, he more or less continues with this line of argumentation, culminating in the doubt “that he was ever at Rome”.  The question of whether or not Peter is to be considered a Bishop of Rome is treated independently by modern scholars, from that of his labor and eventual martyrdom in the imperial capital.  The focus of the present post of course is on the origin of the latter assertion.  It is worth pointing out that like the Waldensians before him, Marsilius justifies his skepticism on the [alleged] silence of Scripture, especially that of Acts and Romans.[9]  Whether or not Holy Writ is silent on the matter is the subject of contemporary scholarly debate, but the majority argue that 1 Peter 5:13 is indeed a reference to Peter’s having composed his epistle at Rome.  That 1 Peter was written by the Apostle from Rome was the view of various Early Church Fathers, beginning with Papias of Hierapolis (c. A.D. 60 – c. 130).[10]

Whether or not one accepts that Scripture is silent on the matter, it has nevertheless been the constant tradition of the Catholic Church that Peter did indeed come to the capital at the end of his life, and suffer martyrdom there; a tradition reflected in the writings of the Early Church Fathers stretching back to the end of the first century, long before the Canon of Scripture was being hammered out in the fourth and fifth centuries.

Marsilius of Padua was excommunicated by Pope John XXII on April 9, 1327.[11]  With respect to the Defensor pacis as a whole, John XXII condemned five propositions as being “contrary to Sacred Scripture and opposed to the Catholic faith, heretical, or analogous to heresy, and erroneous” in the bull Licet iuxta doctrinam, dated October 23, 1327.  Marsilius and his possible co-author John of Jandun were also declared to be “heretics, indeed, manifest and notorious arch-heretics”.[12]  “By the order of Benedict XII [r. 1334 – 1342],” notes Denzinger, “Defensor pacis was again subjected to an examination that Clement VI [r. 1342 – 1352] concluded in 1343….”  For his part, Clement remarked in that year that “we have almost never read a worse heretic than that Marsilius.  For we have extracted from the mandate of Benedict our predecessor on a certain book of his more than 240 heretical articles”.[13]  Whether or not his skepticism of Peter’s Roman sojourn was one of the 240, I have not been able to uncover.  Nevertheless, it would seem that doubting (let alone denying) Peter’s stay in Rome would run a Catholic afoul of Vatican I’s teaching on the papacy, namely, the dogma that “the successors of Peter in the Primacy are the bishops of Rome”.[14]

[2] For detailed literary analyses of extant evidence, including the New Testament, see Cullmann, Peter, 79-123; O’Connor, Peter in Rome, 8-40.  As the Encyclopedia Britannica notes, “If Peter did write 1 Peter, the mention of ‘Babylon’ in 5:13 is fairly reliable evidence that Peter resided at some time in the capital city. If Peter was not the author of the first epistle that bears his name, the presence of this cryptic reference witnesses at least to a tradition of the late 1st or early 2nd century.” (https://www.britannica.com/biography/Saint-Peter-the-Apostle/Tradition-of-Peter-in-Rome, accessed 9/4/2022).

[6] The biographical information above has been culled from the Introduction of a contemporary English translation of the Defensor Pacis:  Marsilius of Padua, The Defender of the Peace, trans. Annabel Brett (New York: Cambridge University Press), xi-xiii.  The citations that follow are taken from Brett’s translation.

[13] Cited in the Introduction of Marsilius of Padua, The Defender of the Peace, xi.

January 2, 2022
Mary, Mother of God and the Council of Ephesus:
Next Post

September 11, 2022 September 11, a 1998 Fatwa, and an Unfortunate Comment
Recent Comments
0 | Leave a Comment
Browse Our Archives
Related posts from The Crossroads 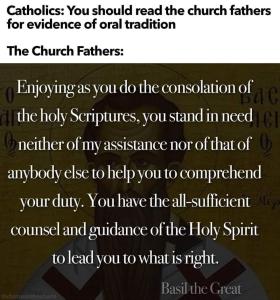