A Beautiful Memoir of Waging Peace

Is a history of the Catholic Worker movement even possible, given the innately anarchic nature of those righteous and sometimes fractious misfits? At a minimum, we could learn from considering the lives of several key figures around Dorothy Day and Peter Maurin. Luckily, oral historian Rosalie Riegle Troester has compiled such a book, her excellent Voices from the Catholic Worker, in which I first came across the name of Jim Forest.

And now Forest, a self-described “reluctant activist,” has now written a personal memoir of his long career in the global peace movement, as a Catholic Worker, a convert to Orthodoxy, and as an amusing observer of American culture over about a half-century. A close friend — indeed an accomplice, we might say — of Dorothy Day, Daniel Berrigan, Thomas Merton, and Thich Nhat Hanh — his Writing Straight With Crooked Lines is filled with delightful and sometime piercing moments.

An example: “If you’re looking for peace,” Forest quotes an old saying, “avoid the peace movement.” He then offers the droll explanation that the movement’s main contribution to world peace is “absorbing some of the planet’s most hot-tempered people and keeping them a safe distance from lethal weapons.”

His first visit to the Catholic Worker house was for a talk — or what Peter Maurin called an evening of clarification of thought. The speaker, to Forest’s astonishment, was Allen Ginsberg, who recited his Kaddish, a poem of memory and mourning about his paranoid schizophrenic mother Naomi. Forest discovered this evening was not untypical of Catholic Worker gatherings at the time. “I knew Dorothy’s Catholicism was fervent, but I didn’t know what open borders it had.”

After the 1963 Bay of Pigs invasion, Forest was appalled enough at the government’s actions to picket the botched effort while he was still on active duty. The pressure to cooperate and inform on his friends in the aftermath, he reveals, led him to become a conscientious objector — a highly unusual status at the time.

He was born a “red diaper baby” with parents who subscribed to the Communist newspaper The Daily Worker. His father was arrested as a “top Red” in 1952 and served six months in prison. His mother could sing the Internationale even late in life, he notes. Indeed his dad met his mom interviewing her for suitability as a member of the Communist Party. (“The CPUSA in the 1950s,” Forest muses: “all cloak and no dagger.”)

Forest attended Hollywood High School, met Pete Seeger, and styled himself a beatnik for a time. Then, while in the Navy, he read Thomas Merton’s Seven Story Mountain, a formative experience for many young people of that time. He went on to befriend Merton and write a biography of him.

He organized the Catholic Peace Fellowship in 1965 after a retreat at Merton’s Hermitage with anti-war priests Daniel and Phillip Berrigan, A. J. Muste, and John Howard Yoder. “Merton saw monasticism as a form of protest: refusing economic gain, refusing to be a consumer, refusing war.” The group spoke of the example of Franz Jägerstätter and the timeliness of his holy disobedience.

In the years of the buildup of American forces in Vietnam, the Berrigans moved from protest to resistance in the form of acts of civil disobedience, notably with the burning of draft records on May 17, 1968 by the Catonsville Nine. (Altogether, activists staged nearly 300 draft board raids during the Vietnam era, plus a raid on Dow Chemical’s headquarters.)

By this point, Forest records, there were a half million U.S. soldiers in Vietnam, and polls showed a majority of Americans were opposed to the war. He himself was arrested with the Milwaukee Fourteen and sentenced to two years in prison.

Finally, on April 30, 1975, the largest helicopter evacuation in history marked the end of the Vietnam war, having cost over one million Vietnamese lives (tens of thousands of them children) and nearly 60,000 American lives. Millions more were wounded, the Vietnamese countryside poisoned. The subsequent lack of any truth and reconciliation process, Forest points out, led tragically to harsh repression and human rights violations.

A key moment in Forest’s spiritual life is his encounter with a friend of Merton’s the Vietnamese Buddhist monk and Zen master from Saigon, Thich Nhat Hanh. A rising leader in the global peace movement, Nhat Hanh met with Martin Luther King Jr. in 1966, urging him to denounce the Vietnam War, which King did publicly the following year. Asked frequently what the war was like in his country, Hanh would simply reply, “Everything is destroyed.”

Again on Dorothy Day, with whom Forest occasionally — but never permanently — clashed: “I also learned that saints are not always saintly. While I have no doubt that Dorothy Day warrants inclusion in the church calendar as a model of sanctity, it was not just to pass the time of day that she went to confession every Saturday night.”

His wonderful recollections of selling the Catholic Worker paper on the streets, improvising on an author’s name or the headline (“Catholic Worker here! Thomas Merton says root of war is fear!”) and the “family” nicknames of the house’s residents — Smokey Joe, Missouri Mari, Indian Pete, Mad Paul, and Russian Mike — capture what feels like a long-gone world of down-and-out eccentrics.

Forest came to share Dorothy’s fascination with and love of Russia and Orthodoxy (“She all but ordered me to read Dostoyevsky”), eventually writing a book on his conversion to the latter and another about the post-Communist religious revival in Russia.

His new memoir reminded this reader of what might be called the deep spiritual optimism of the 1960s, when an ecumenism of peace was possible and accomplished much. At this moment, we need that reminder. 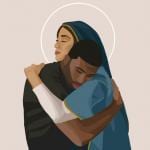 October 27, 2020 A Catholic Mom's Response to Fr. Meeks
Recent Comments
0 | Leave a Comment
Browse Our Archives
get the latest from
Catholic
Sign up for our newsletter
POPULAR AT PATHEOS Catholic
1

St. Mary Magdalene Was Not a...
Femina Ferox
Related posts from The Dorothy Option