“The Christianity of This Land”

Many people are quite legitimately horrified that the Trump regime, under no compulsion of law, has adopted General John F. Kelly’s suggestion that a.) people entering the country for the purpose of seeking asylum be arrested and prosecuted; and b) that the children of those people be forcibly separated from them and remanded to mass internment centers administered by US Government contractors. Kelly and Attorney General Jeff Sessions have both admitted that this optional practice is purely punitive, designed to inflict maximum moral and emotional pain on poor people who come here seeking to escape the horrors of their home countries. They also admit that it is hoped the policy will be a deterrent, convincing people who have nowhere left to go that they can’t come here, at least not if they love their kids.

Some of the children forcibly separated from their parents have been as young as a year old. Some infants have been ripped away from mothers while breastfeeding. Some parents have been told that their kids are merely being taken to bathe, only to have them permanently removed and bussed to the kiddie camps. That, of course, was a favorite tactic of the guards at Auschwitz and other Nazi extermination camps. The Trump regime now plans to build tent cities near military bases to house children. Which military bases? Why, bases in Texas, of course. Yes, Texas, where the average summer temperature is 92º in June, 96º in July, 97º in August, a relatively balmy 91º in September, and routinely soars above 100º.

Of course, Sessions, a noisy Evangelical, invoked Scripture to defend the indefensible: “I would cite you to the Apostle Paul and his clear and wise command in Romans 13, to obey the laws of the government because God has ordained the government for his purposes.” Naturally, White House Press Secretary and preacher’s kid Sarah Huckabee Sanders agreed with Sessions: “I can say that it is very biblical to enforce the law. That is repeated throughout the Bible.” Thus, through biblical reasoning worthy of the German Evangelical Church, Sessions and Sanders exhausted all American Evangelical reflection on the role of government in the lives of believers.

But here’s the thing, folks: The forcible separation of children from their parents has a long history in the United States, a history nearly always justified on biblical grounds. Some have said or inferred that this current policy “isn’t who we are.” They’re wrong. It is exactly who we are.

From the mid-19th Century right through the 1980’s, tens of thousands of Native American children were forcibly removed from their families and made to attend “Indian Boarding Schools.” These schools were designed to strip Native American children of any vestige of their cultural patrimony and remake them in the image of middle-class, white American Christians. They were taught to be ashamed of their heritage, their language, their color, and their native religion. They were forced to convert to Christianity and to identify with European civilization.

At first, these residential schools were established on Indian reservations themselves. But with the opening of the Carlisle Indian Industrial School, the racist Bureau of Indian Affairs began planting remote schools around the country, eventually establishing over 100 institutions. A US Army officer named Pratt founded Carlisle. He said, “A great general has said that the only good Indian is a dead one. In a sense, I agree with the sentiment, but only in this: that all the Indian there is in the race should be dead. Kill the Indian in him and save the man.” Pratt’s method was “assimilation through total immersion,” which means that children kidnapped from their parents were isolated from tribe, community, and family for many years, and often never saw their homes again. Naturally, there was widespread physical and sexual abuse of both boys and girls, and at one time the death rate of Native American kids in government schools was six times the death rate of kids in any other ethnic group.

Sadly, most of these schools were turned over to religious groups, including many Catholic religious orders, for administration. Unitarians, Quakers, Catholics, Methodists, Presbyterians, Baptists, Episcopalians, the entire panoply of American religious denominations, were involved in this soft form of ethnic cleansing which had at its heart a monumental abuse of human rights: the forcible separation of children from their mothers and fathers. And all this was justified as a form of evangelization, of bringing the ‘Good News’ to savages, whether they liked it or not, whether or not it amounted to moral and emotional – or even physical – torture.

Then, of course, there is the history of African slaves. From 1640 to 1865, African slaves were considered chattel, items of property. One slave equaled one item of property, without regard to family relations. Husband and wife, brother and sister, parent and child … none of it mattered any more than an arrangement of objects on a table might matter. As Heather Andrea Williams has written:

Enslaved people lived with the perpetual possibility of separation through the sale of one or more family members. Slaveowners’ wealth lay largely in the people they owned, therefore, they frequently sold and or purchased people as finances warranted. A multitude of scenarios brought about sale. An enslaved person could be sold as part of an estate when his owner died, or because the owner needed to liquidate assets to pay off debts, or because the owner thought the enslaved person was a troublemaker. A father might be sold away by his owner while the mother and children remained behind, or the mother and children might be sold. Enslaved families were also divided for inheritance when an owner died, or because the owners’ adult children moved away to create new lives, taking some of the enslaved people with them. These decisions were, of course, beyond the control of the people whose lives they affected most. Sometimes an enslaved man or woman pleaded with an owner to purchase his or her spouse to avoid separation. The intervention was not always successful. Historian Michael Tadman has estimated that approximately one third of enslaved children in the upper South states of Maryland and Virginia experienced family separation in one of three possible scenarios: sale away from parents; sale with mother away from father; or sale of mother or father away from child. The fear of separation haunted adults who knew how likely it was to happen. Young children, innocently unaware of the possibilities, learned quickly of the pain that such separations could cost.

“Night and day, you could hear men and women screaming … ma, pa, sister or brother … taken without any warning,” Susan Hamilton, another witness to a slave auction, recalled in a 1938 interview. “People was always dying from a broken heart.” (DiNeen Brown, Washington Post, May 31, 2018)

For two hundred years in this country, male children were taken from their mothers when they were strong enough to work in the fields, female children were taken when they were old enough to satisfy white male lust; mothers and fathers were sold and their children retained; children were sold and their parents retained, mothers with infants at the breast had those babies torn away so they could nurse white children in the master’s house. And all of it justified by reference to Scripture, most notably Ephesians 6:5 (“Slaves, obey your earthly masters with fear and trembling”) Titus 2:9 (“Tell slaves to be submissive to their masters and to give satisfaction in every respect”) or by appeal to the supposed “Curse of Ham,” a story from Genesis in which Ham, the son of Noah, accidentally sees his drunk father naked and tells his brothers. When Noah finds out, he curses Canaan, the son of Ham, saying, “He shall be a servant of the servants.” What any of this has to do with the enslavement of Africans in North America between 1640 and 1865 is a mystery to me, as it no doubt is to you. But in the same twisted way that Jeff Sessions can claim that Romans 13 justifies ripping babies from their mothers’ breasts or consigning eight year-olds to crowded prisons, the Curse of Ham was just a convenient excuse for immorality of the blackest kind, the American kind.

So, this is who we are. This is who we’ve always been. Sorry. I’ll leave the last word to Frederick Douglass, whose observations about the bullshit that is American Christianity are as pinpoint accurate now as they were in 1845: 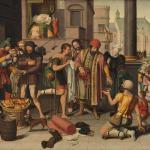 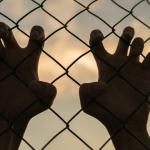 June 26, 2018 There Is No Immigration Crisis, But There Is a Crisis in The American Catholic Church
Browse Our Archives
Follow Us!