Feasting with the Skeleton Saints of Roggenburg

Feasting with the Skeleton Saints of Roggenburg August 15, 2018 Andrew Chesnut 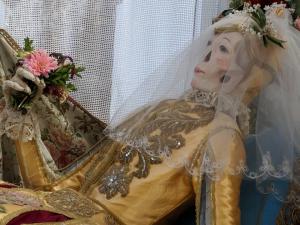 As a specialist in lived religion much of my memento mori research in Europe this summer has left me missing the human element of communion with the divine. Most of the mummies, bejeweled skeleton saints, and piles of human bones in charnel houses are on display more as museum exhibits than as sacred objects meant for veneration and adoration. Today’s Leiberfest (feast of [heavenly] bodies) in the tiny Bavarian town of Roggenburg, however, couldn’t have been a more poignant case of lived religion in which the town’s four patron skeletal saints reconnected parishioners with the past, reinforced their local identity, and reminded them that they too will soon be bones and skulls. 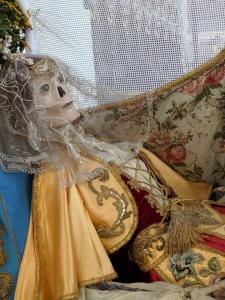 The four skeletal saints that were displayed today in the sanctuary of the Roggenburg Abbey were the objects of heartfelt devotion, regaled with floral bouquets and herbs and adoringly processed through the town, of course with the sole male saint leading the way carried by four male pallbearers bedecked in black top hats and tails. Nowadays of course the term skeleton saint evokes Santa Muerte, the Mexican folk saint of death. Despite some significant iconographical similarities with a number of the female catacomb saints of Europe, Santa Muerte lies far beyond the pale of Catholic orthodoxy and orthopraxy, to the extent that the Mexican skeleton saint has been rebuked by the Vatican and scores of Mexican and even American bishops. 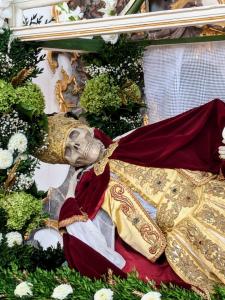 The four spiritual patrons of Roggenburg belong to a larger category of bejeweled Catacomb saints housed at monasteries and churches throughout Catholic Germania, namely Austria, Switzerland, and most importantly Bavarian Germany. While one might expect to encounter these beautiful bejeweled skeletal saints in more heavily Catholic nations such as Portugal and Italy, it’s the Teutonic regions that were on the front lines of the Protestant Reformation, spearheaded by Martin Luther, and the subsequent Counter-Reformation in which the exquisitely adorned skeletal relics were manufactured. The Reformation, of course, led to violent campaigns in Germania against the cult of the saints and holy relics in which images and body parts of Catholic holy women and men were destroyed as symbols of “Roman idolatry.” 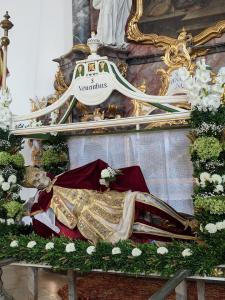 While significant swaths of Germania joined Luther’s religious revolution, the southern region became one of the epicenters of the Counter-Reformation in which the cult of the saints did not only continue but was revitalized with the importation of the skeletal remains of putative saints and martyrs from the Roman catacombs. The term putative applies here because during the Middle Ages there was a robust black market in bogus relics that were bought and sold by unscrupulous merchants who misrepresented the blood and bones of deceased commoners as those of certain saints. This is why, for example, the more prominent saints would appear to be miraculously endowed with extra body parts, such as the various heads of St. John the Baptist that can be found in different European countries and also in Damascus. 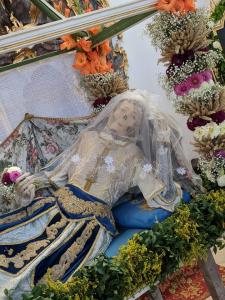 So bones and skeletons of mostly unknown origin were traipsed from the Roman Catacombs across the Alps where nuns lovingly transformed them into regally bejeweled and attired “catacomb saints.” Roggenburg received its own catacombs quartet rather late in the game, around 300 years ago. The opulence of these skeletal saints stood in stark contrast to the austerity of Lutheran churches where such eye-candy was considered a distraction from worshiping God. The regal opulence of the skeletal saints did double duty in the Counter-Reformation campaign to shore up the faith in the battle for souls with Lutheran “heretics.” The life-size skeletal memento mori reminded Catholics to lead a Christian life during an era in which life expectancy was about half of what it is today – in the 80s. And the reward for a life of Catholic piety could be the treasures of heaven symbolized by the bling and fine threads worn so regally by the catacomb saints. 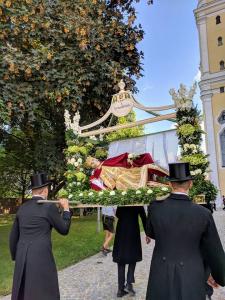 As I processed along with the beautiful bejeweled saints I was struck not only by the piety of the parishioners but also by their advanced age. Sexagenarians, septuagenarians, and octogenarians heavily predominated with those between the ages of 20 and 50 virtually absent. The average age in Germany is 44, while I’d estimate an average of mid-60s for Leiberfest participants. Caught up in the alluring strangeness of baroque bejeweled skeleton saints processing through the streets of one of the most secularized and prosperous nations on earth, I couldn’t help but wonder if I was witnessing a moribund act of faith. Only a new generation of parishioners can prevent their precious catacomb saints from becoming unenchanted museum pieces unmoored from religious devotion. 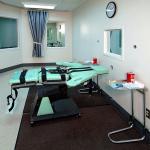 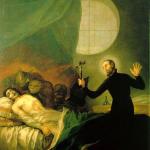 August 30, 2018 Why is Exorcism All the Rage Across the Globe?
Recent Comments
0 | Leave a Comment
Browse Our Archives
get the latest from
The Global Catholic Review
Sign up for our newsletter
POPULAR AT PATHEOS Catholic
1