Evangelical Churches Seize Power in Latin America: ‘The Catholic Church Has Been Lax’ 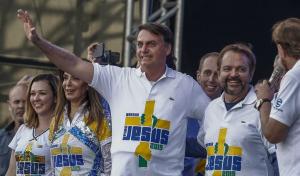 “The Bible returns to the presidential palace.” That’s what the Bolivian interim President Jeanine Áñez stated at her inauguration last November. Her turbulent administration is met with a lot of resistance from the ‘left’, but enjoys plenty of support from the Evangelical churches which are rapidly gaining ground throughout Latin America. The presidents of Mexico and Brazil were elected with explicit support from Evangelical churches. The political and

A proud Catholic church stands on the central plaza of Yaruquí, a mountain village in Ecuador. This is not surprising – there is one on every main plaza in Latin America. The Spanish and Portuguese brought Catholicism to the New World in the sixteenth century. Since then the Roman Catholic Church practically had a monopoly on religion in Latin America.

But Google Maps locates seven evangelical churches in Yaruquí, while there is just one Catholic Church. The village is no anomaly. In many countries in Latin America the population was 95 percent Catholic well into the twentieth century. By the last count in 2014 was only 69 percent Catholic. Evangelical churchgoers now make up nineteen percent of the population, while only nine percent had been raised as such.

Church of the Masses

“Evangelical pastors are religious entrepreneurs.” In his youth, Marcelo Sergio López went to the Catholic Church. In his forties he converted to a Pentecostal church. ‘The church helps me to find peace in my daily life. My parents were both alcoholics so they couldn’t take care of me. The problems in my childhood also meant that I had difficulty with the Church.’

Marcelo never completely left the Catholic Church, but he kept attending less and less. ‘It was a neighbor who said to me,’ Come to my Pentecostal church. You will find peace here. Now I have been in that church for eight years. I can
give my children and wife the stability that I never knew as a child. ‘

According to Dr. Andrew Chesnut, Marcelo’s story fits into a broader context. He is Professor of Religious Studies at Virginia Commonwealth University in Richmond, Virginia. Chesnut has written several books on the Evangelical boom in Latin America.

Evangelical churches have mushroomed among the underclass. They are churches of the poor and for the poor, ”says Chesnut. The Catholic Church is elitist despite its attempt at Liberation Theology, which was developed in the 1960s as a Catholic movement in Latin America focused on social inequality. The movement gained some followers, also in Europe.

Chesnut: ‘Liberation theology hardly exists anymore. The movement was elitist. Because evangelical churches sprang up from the great underclass, they have been successful there. You can also see that to be a Catholic priest in

men have to study for a long time. In terms of educational levels, Catholic priests figure among the top three percent of the continent, while some Evangelical pastors only attend primary school. They are charismatic leaders and that makes a difference. ‘

Marcelo Sergio López thinks the pastor of his Pentecostal church is an admirable man. ‘The Spirit works through him. And God is the Spirit. That’s the point, not the Virgin, the religious images or all the saints. ‘ Thanks to the pastor he started to study the Bible so he always tries to improve his life. Marcelo compares different Bible translations with each other. ‘It’s good to know how other people are thinking differently about something, while they are all Christians. ‘

Pastor Ábel Carvajal is a Catholic priest in Yaruquí and has another explanation for the current state of his church.
He puts his hand on his chest. The sexual abuse scandals have done us no good. It happens everywhere, but with us it makes more news. There are some bad priests, but it is reflected on the entire church. ‘

The village priest does have ideas about how to turn the tide. ‘To begin with we need to welcome people more warmly. When new people enter the church we need to greet them and say, “Thank you for being here.” That happens far too little now.

We need to be less authoritarian, an image that is strongly associated with us. ‘ Carvajal believes that his parish should be more of a community outside of mass. ‘We can offer many more activities. Before the pandemic, I took the church youth to families who could use some help to show them that you must care for others and that life is not all about having fun. Another time I took them to a diseased tree and a polluted river to get them to learn about protecting the environment. Once a year I lead a long hike with young adults to a nearby mountain top. Then I show them how beautiful God’s creation is. During retreats in Yaruquí, I point out all the litter strewn in the streets. That is one way to respect nature, but it also forges community spirit. ‘

Pastor Carvajal is overflowing with ideas. According to Professor Chesnut the Catholic Church has been indolent in Latin America. It had a monopoly on religions since the Spanish and Portuguese conquests. That is no longer the case. Competition has come. There is now a  free market of beliefs. As in any free market you have to compete but the Catholic Church fails to do so effectively. ‘

Evangelical pastors do that a lot better, according to the professor. ‘Being religious entrepreneurs they innovate a lot.
For example, there are church services with cumbia- or merengue music. ‘ But not only is the style innovative. According to Chesnut, there is another reason for success. Some pastors receive a bonus if they recruit a certain number of believers. That can be a formula for success. ‘

The Catholic answer to the exodus of members is the Charismatic Renewal. This movement focuses on the Holy Spirit as do many Evangelical groups. Chesnut: ‘It therefore is case of the Cathlolic Church imitating the wildly successful Pentecostal competition .’ The Latin American bishops have expressed their support for the Catholic Charismatc Renewal movement in the climate of fear generated by the the current exodus of members.

politically. That is of course no coincidence. In order to exercise political influence resources are needed. Political campaigns are not cheap.

In recent years we have seen the results of that political movement. The most famous example is Brazil. President Jair Messias Bolsonaro won the 2018 elections. With the Evangelical churches as his main constituency, he is implementing a decidedly conservative policy.  Latin America for the last twenty years has tilted toward the political left. In almost all countries, center-left to socialist governments were in power. Little of that is left now.

This change is best reflected in Bolivia. At the end of 2019, the military demanded that  Socialist President Evo Morales resign because he was in violation of the constitution for a third term. Then the election had the semblance of fraud, because Morales had exactly the necessary lead in votes after the internet page on which the results appeared had been canceled and then came back online.

Morales was subsequently deposed by the army. Interim President Jeanine Áñez said at her inauguration that “the Bible returns in the presidential palace ‘. To back up her claim she raised a large leather-bound Bible high above her head. Áñez was supported by Luis Fernando Camacho, a political leader who has a huge Evangelical constituency.

He is more conservative than the Catholic Church in Bolivia, for example, when it comes to premarital sex, abortion or same-sex marriage.

Even in Mexico, where Evangelical congregations are only eight percent of the population they helped President Andrés Manuel López Obrador rise to power. This is unique, because the current president has a somewhat more left-wing bent. Andrew Chesnut explains the paradox. ‘I don’t think his values are particularly left wing. On typical
Evangelical issues such as abortion and gay marriage, he and Evangelical churches are on the same page. ‘

The professor gives a final explanation of Evangelical success. The Catholic Church is much more heterogeneous than its Evangelical counterparts. ‘ Evangelical Churches have clear, conservative values and their internal diversity is much less. This is useful for successfully conveying a political message. According to Chesnut, the Evangelical churches will greatly influence the direcition of Latin American politics over the next few years. 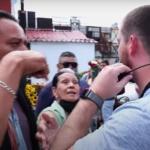