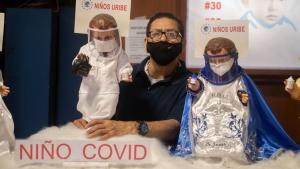 Across Mexico people are turning to miraculous holy healers for protection and healing from Coronavirus, while Santa Muerte as we have detailed is being prayed to for sacred sanation so is a rather more juvenile character who despite wearing extra small size clothing is said locally to be incredibly powerful. Holy Child Doctor of the Sick known as el Niño Doctor is one of the multiple manifestations of the Christ Child in Mexico and is known for His powers of healing, as I will detail.

Indeed, across the world people are turning to Catholicism with renewed zeal, especially in the Global South, to deal with the fear of, and to heal, viral infections from Coronavirus. In some countries government responses have been inadequate, and death tolls have risen rapidly. Latin America has been hit hard with Mexico currently listed, as of the date of this article, as the country with the fourth highest death-rate from the pandemic. Furthermore, given the failure of the government to provide the necessary protective equipment, it currently has the highest number of frontline worker deaths. In the already parlous conditions of the drug war, with many living in poverty, COVID has created worsened conditions of precarity for numerous Mexicans, especially in the context of state austerity. Faced with yet another threat to life in the form of COVID-19 many have begun turning not only to God and the Virgin Mary but other lesser known Catholic advocations known specifically for their healing prowess. 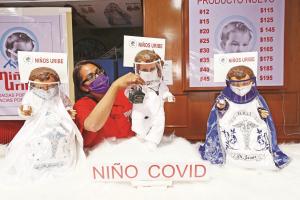 One of these is Santo Niño Jesús Doctor de Los Enfermos (Holy Infant Jesus Doctor of the Sick). El Niño Doctor is one of the multiple advocations of the Christ Child in Mexico, and stands out for his healing powers. His shrine in Tepeaca is part of a pilgrimage circuit that includes the Basilica of the Virgin of Guadalupe, and the Sanctuary of Our Lord Jesus Christ and Saint Michael of the Caves of Chalma. Before COVID travel restrictions it used to attract pilgrims not only from Mexico but also further afield, from the US, Canada and Europe.

The Child Doctor might be best understood as modern encapsulation of Jesus’s ministry as recounted in the Gospels, directly embodying His miracles of healing. In the Gospel of John, which details seven miracles that John wrote about to show the Jews of his day that Jesus was the Christ, three of the miracles are of healing. The Child Doctor can be seen as a concentrated embodiment of Christ’s powers of sanation. An analysis of the Gospels reveal Jesus’s time was in large part dedicated to healing the sick and downtrodden, and in Mexico during times of Coronavirus, due to closures of businesses and a implications for the economy many Mexicans are now without work and due to improper living conditions, nourishment, are all the more exposed to sickness. Others may be forced to work in unsafe conditions and seek spiritual support in perilous conditions. Jesus is said to have healed people from all walks of life and illnesses of all kinds from fevers, paralysis to chronic illnesses, the Gospels detail that there was no sickness or disease that was too difficult for Him to heal. He never turned away anyone who came to Him for healing. As such el Niño Doctor is an advocation that speaks to this aspect of Christ and offers His power to all who turn to him. 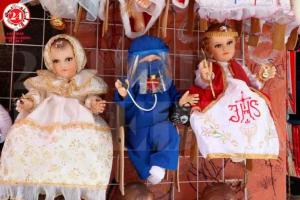 Traditionally, the Child Doctor is bedecked in an old-fashioned white physician’s smock, with a stethoscope hanging from His neck and in his hand a black doctor’s bag. But recently on altars across Mexico during times of coronavirus the Child Doctor sports modern medical garb, complete with scrub cap, and a surgical mask covering His mouth which speaks to awareness of the need to mask to protect from COVID-19. In some places he appears in full hazmat suit, evincing the fear of the virus and the need for protection from this wee baby Jesus. In some Santa Muerte shrines, such as that of Yuri Mendez in Cancun, He has been placed alongside Santa Muerte. The powers of the divine dynamic duo have been appealed to in order to battle Coronavirus on two fronts, with the Mexican folk saint of death aiding ailing adults and  Santo Niño Jesús Doctor ministrating holy healing to children. 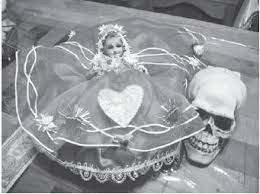 For most Mexican Catholics, the Niño Doctor, also known as Niño Dios, is a legitimate expression of Catholicism. He offers an alternative, yet local-feeling, counter-devotional paradigm to the many non-Catholic folk saints that have emerged in the last decades in Mexico, such as Santa Muerte, Jesus Malverde and others, who are seen by the clergy as dangerous. Catholic priests have had an uphill battle, in some parts of the country, convincing parishioners not to turn to these figures who they have decried as heretical and even satanic, no doubt fearful of losing their flock to folk saints whose veneration detracts from their authority. However, in practice, as we have seen Niño Dios may be used in tandem with figures such as Santa Muerte, as Mexicans turn to a whole pantheon of miracle workers to seek to improve their lives and safeguard their health. As an advocation of Christ there has been no observable opposition to worship of the Child Doctor, rather I have witnessed quiet clerical support for the figure, especially as they are aware of the needs of parishioners to find spiritual support and miracles of healing in these trying times.

The Holy Child of Atocha, who the Child Doctor is based on, originated in Spain in the second half of the 16th century or earlier. According to the myth the Infant Jesus miraculously appeared to a monk who molded the statue based on his vision Another story states that the statue was owned by St. Theresa of Jesus who venerated Jesus’s childhood and dispersed devotion of the Infant Jesus throughout Spain. She is said to have given the statue to a friend whose daughter was getting married in Prague.

It is an established fact that the statue of the Infant was brought to Prague by the Spanish Duchess Marie Manriquez de Lcara who married Vrastislav of Pernstejn in 1556. Later she gifted it to her daughter, Polyxena, as a wedding gift who received miraculous aid from it. Polyxena of Lobkowicz donated the Infant to the monastery of Discalced Carmelites at the church of Our Lady Victorious where it was much venerated.  In 1631 the Saxons seized Prague plundering the Carmelite monastery. The Infant Jesus was tossed aside as junk. The monks, who had fled, returned to Prague in 1637. Once again, it is said that the Infant Jesus began to deliver miraculous healing and is said to also have saved Prague during the Swedish siege in 1639. In 1655 the statue was crowned by the Bishop of Prague. Its popularity has accrued every since.

In Mexico, the Spanish brought over the image of the Holy Child of Atocha during the colonial period. It was popular among nuns. One such nun in Tepeaca brought her statue of the Holy Infant to a hospital where she served as a nurse and in mascot-like fashion, dressed as a doctor. The infirm and their friends and family began to pray to him for miracles of healing which He is said to have delivered. As knowledge of these miracles spread a following sprang up, with a yearly procession and celebration in His honour. The Infant was also moved to His own chapel. In 1991, the image received the ritual blessing of Archbishop D. Rosendo Huesca Pacheco.  And the Child Doctor’s popularity only grew.

The Infant is especially sought out for the healing of ailing Mexican children. In churches across the country His statues are often graced with offerings of toys and candy, ex-votos for miracles of restored health that He is believed to have granted to children. His recent appearance wearing a Covid mask across Mexico bespeaks the intense fear over the virulent pandemic currently peaking in Mexico. 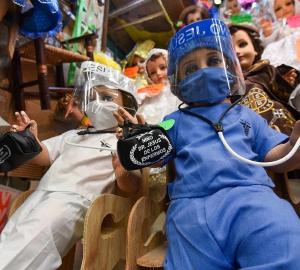 *Dr. Kate Kingsbury earned her doctorate in anthropology at the University of Oxford and is author of numerous articles and book chapters on Santa Muerte and African Diasporan religion. She is writing the forthcoming “Daughters of Death: The Female Followers of Santa Muerte” for Oxford University Press. She is a polymath interested in exploring the intersections between anthropology, religious studies, philosophy, sociology and critical theory. Dr. Kingsbury is Adjunct Professor at the University of Alberta, Canada. Dr. Kingsbury is a staunch believer in equal rights and the power of education to ameliorate global disparities. She also works pro bono for a non profit organisation that aims to empower and educate girls in Uganda.

May 11, 2021
Sacking the Saints - Pentecostal Persecution of Religious Rivals in Brazil
Next Post 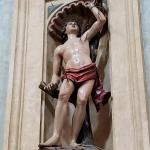 August 11, 2021 Sebastian and Santa Muerte - Simpatico Saints of Holy Death and LGBTQ
Recent Comments
0 | Leave a Comment
"Fine artcile, but the title is Quite misleading,,, implying that the blame for Catholicism's decline ..."
Doug Thatcher Catholic Decline Continues in Latin America ..."
"And this, is the cousin of Pachamama."
Mamas kid Death on the Road – A ..."
"Misplaced compassion, the most common of the mistakes of believers and such. He is not ..."
Chuck ‘Narcosaint’ Jesús Malverde Miraculously Materializes at ..."
"If you are already out of your mind, what difference is way out of your ..."
RajunCajun Mushroom Mysticism and the Paschal Mystery
Browse Our Archives
Related posts from The Global Catholic Review