Why Christians Must Speak Out For LGBT Rights Now More Than Ever July 30, 2014 Mark Sandlin

I’m an ordained minster and haven’t conducted a wedding in more than three years.

It’s not that I haven’t been asked. It’s just that about three years ago, I took a vow to sign no more marriage certificates “until all can wed.”

Let me explain. My denomination, Presbyterian Church (USA), in 2011, had just voted to make it possible for someone who is gay to be ordained as a minister.

As you might imagine, for those of us working toward equal rights for all people, it was cause for much celebration.

For me, and I assume, many others, the decision only served to underscore how far the Church still had to go toward truly recognizing equality for everyone.

So, I decided to make a personal statement – to push back a little bit to help advance the movement. I decided to stop doing weddings until everyone in my state could marry the person they love.

What I can do for all people, I’d be glad to do for everyone. Until I could do it for everyone, I’d be doing it for no one.

I simply decided that I was no longer willing to sign another wedding certificate, knowing the document represents a system that intentionally excludes people whom I understand to be equally created in God’s image.

As an ordained minister, it seemed hypocritical to not only actively participate in, but to officiate a ceremony that actively marginalizes people.

But, as difficult as it has been for me personally, mine is not close to the depth of pain felt by people who have been denied the right to marry the person they love.

This summer, I saw the beginning of the end of my denomination’s non-biblical bias against LGBT folk. In PC(USA)’s national conference, we “made way” for ministers in states where it is legal to preside over same sex-weddings.

This week, a ruling out of the federal Fourth Circuit court makes it pretty clear that North Carolina’s Amendment One (a ban on same-sex marriage and civil unions) is about to fall.

My instinct is to celebrate.

But, I feel unsettled.

To believe that we’ve turned the corner on LGBT rights because of this ruling is to believe that there is no racism in the United States, simply because we elected a black person as President twice.

That would be naive, short-sighted and wishful-thinking. The biases, in both cases – against people of color and the LGBT community – remain deeply entrenched throughout the United States.

Even as we watch state after state recognize the constitutional rights of same-sex couples, we still see and hear Christian ministers spouting off absolute absurdities against LGBT folks, rooted in their personal fears, with the intent of planting the same fears in others.

There was a point at which I basically stopped addressing the issue of LGBT equality in the United States because I felt like we had reached a tipping point. It seemed clear to me where the legislation and our community was heading, and I believed the side that valued the equality of all people was clearly going to prevail.

I was right – and I was wrong.

I was right in my understanding that as a legal issue, the writing is on the wall in favor of marriage for all people, regardless of who they love.

I was wrong about the continuing need to address the issue.

Today, as I realize that very soon I will begin officiating at weddings again, because I can now legally offer this service to all people, I am taking a new pledge to remind myself and others that this is far from over. The Christian Church has caused a great deal of hurt and damage that needs to be addressed. There is a great deal of vitriol, judgment and hurtfulness that is still coming from the Church toward the LGBT community. And the truth is, as marriage equality – the very thing that a portion of the Church stands against – is given legal protection, you can count on the judgement, marginalization and hatred getting louder, more aggressive and more absurd.

One of the things we repeatedly have been taught by history is that that laws do not sufficiently change hearts and minds – particularly when some Christians are wrapping bigotry in a Bible.

So, today I pledged to start talking about LGBT equality again. I’m asking you to do the same.

Every time a minister starts spouting absurdities about our LGBT brothers and sisters we must respond. You could write blog post or even post a creative, non-violent response of resistance like we’ve done in the past.

As I wrote in my original “Until All Can Wed” post: “Alone I can make a statement; together we can make a difference.”

One thing is for certain; I will no longer dismissively roll my eyes at the “absurdity” of this issue and ignore it.

There will be a response.

We will take back the Christian voice on this issue.

Love will win the day. 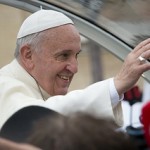