Why Viewing the Cross Through Atonement Creates a God I Can’t Worship April 1, 2015 Mark Sandlin

This article is part of the new Head to Head debate feature at Patheos. This week, in concert with our Engaging Easter coverage, I’m debating Evangelical Channel’s Mike Bird of “Euangelion”. The question… 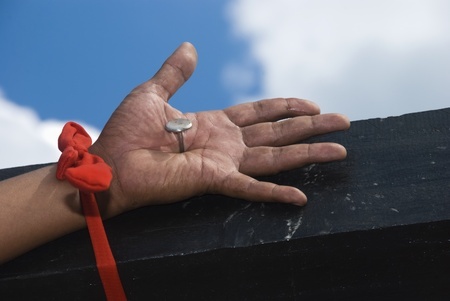 “Why Did Jesus Die on the Cross?”

I’ve now opened my last three posts with that question. (You can read the other two articles here and here).

It’s an important question and it seems all the more important this time of the year as Easter approaches. And, it’s why I agreed to do Patheos’ “Head to Head” series on the topic. Which means this post is a response to my “sparring partner,” Michael Bird’s initial post about why Jesus died on a cross. Please, take a minute to read it.

Essentially, Michael makes one rather large argument which includes many perspectives and then narrows the argument to one.

The very large argument is that there are many models of atonement and “we should not focus on just one and ignore the others since they are all part of the kaleidoscope of NT images for what the cross achieves.” That is a very wonderful kind of post-modern, “don’t pin me down to one thing,” way of thinking, for which I, admittedly, have great respect.

Michael groups all the models under “atonement” which is where I have happen to have a problem with biblical interpretation as well as a concern about praxis (that’s a fancy word for moving theory into action). We’ll get to my problems very shortly.

Michael’s narrow(er) argument (which he makes, I might add, with a very apt tip of the hat to The Lord of the Rings – mad respect) is basically what is known as Christus Victor. He seems to be arguing for an ancient Christian theory which posits that Jesus’ death on the cross defeats the powers of evil.

Christus Victor is closely related to the Ransom theory, which basically says Jesus was the sacrifice paid to save us from our sins. (I’m somewhat fond of parts of more recent versions of this theory presented by folks like Marcus Borg).

I mentioned that I had both a problem with biblical interpretation along with concerns about how this way of thinking plays out in practice. I could present all kinds of involved deliberations on it, but, in this case, I decided a note I received in response to my initial post does a much better job:

Thank you for your wonderful blog post today. It makes a lot more sense to me now. I don’t think I have the words to explain it properly, but you know when you accept Jesus and you’re saved, and you are told you don’t have to sin anymore because you have the power of Jesus in you? And then you go and screw up again, so it’s like you spit on the cross and the sacrifice Jesus made in atoning for your sins.

But then you try not to sin and pray not to sin, but do it anyway and come to believe that you just aren’t actually saved. And you basically suck because you keep screwing up, and you pray for help and it doesn’t come.

Well, your post just erased all that. Thank you.

Atonement teaches us that God solves problems with violence.

That is not the God I hear Jesus teaching us about.

And frankly, worshiping a vengeful, violent God (even if it comes from loving reasons) leads to fear and violence and guilt.

That’s simply not the God I learned about from the teachings of Jesus.

March 31, 2015
Easter Reminds Us That Sunday is Coming
Next Post

April 2, 2015 The Atonement of the Cross is a Hell of a Thing
Recent Comments
0 | Leave a Comment
Browse Our Archives
get the latest from
Progressive Christian
Sign up for our newsletter
Related posts from The God Article with Mark Sandlin