A Few Thoughts on Eucharistic Orientation 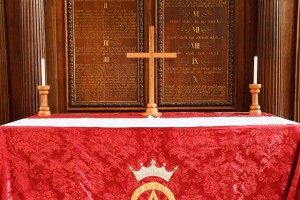 You can easily begin a deep theological and liturgical debate across ecumenical lines with one simple question: how should the Celebrant be oriented in the Eucharist? Maybe it’s based on the fact that I am an Anglican, but this simple question has churned up many strong feelings and convictions.

My main goal, here, is to provide some fodder for thinking about our Eucharistic orientation. Perhaps we (those who are the inheritors of the Reformation(s)) have gotten it wrong…

For the children of the Reformation(s) the answer is clear: the priest (if you have one) should face the people. This is known as versus populum and it supposedly encourages or facilitates corporate worship around a common table. The logic continues that only when gathered around a common table can any sense of “clericalism” or medieval superstition be avoided.

The other tradition is known as ad orientem. In this celebration of the Eucharist the priest faces the altar, i.e. East, and has back turned to the people. I want to unpack the thinking behind this in a bit, but right now it’s important to note arguments against ad orientem. Naysayers will suggest that this orientation separates the people from the priest; that this is impersonal and cold (back turned); that the people become spectators; etc. The list goes on ad infinitum.

I think the main issue is that we haven’t taken the time to understand ad orientem. Joseph Cardinal Ratzinger (Pope Benedict XVI, Emeritus) wrote about this in his book The Spirit of the Liturgy. I encourage all to purchase this timeless classic!

Ad orientem makes a great deal of sense when you understand that the entire practice is based on orienting oneself toward the East. Why? The assembled church faces East in the eschatological expectation of our Lord’s return. The Sun rises in the East and facing toward the East, in ancient times, meant facing toward the New Jerusalem—the heavenly city for which we wait and hope. Remember that the Lord’s return has always been imminent, for we know not the time or the hour, and therefore the Eucharistic people are prepared to greet their Risen Lord.

The priest is seen as a member of the assembled church. In versus populum, one might say, there is a table separating priest from people but in ad orientem there is nothing separating them. All are equal, all are turned toward the East, all are anticipating the Lord’s parousia. When the priest faces the people it may feel, so goes the logic, as if the priest is the central figure of the celebration. In ad orientem it is clear that God is the chief actor: everyone is looking toward the triune God rather than at the priest.

Please here this: I am not suggesting that versus populum is wrong or invalid. The overwhelming majority of the time I am celebrating in this style. I simply think that we need to reconsider our stance on ad orientem.

If our liturgical worship is whole-bodied, and if what we do in worship matters as much as what we say, then perhaps our posture and orientation says and does something theologically. What if we attuned ourselves to eschatological hope and anticipation and prepared to great the Risen Lord? What if we have gotten it wrong and we’ve thrown the baby out with the bath water?

In the Eucharist we, both clergy and laity, are concelebrants. We join our prayers, praise, and voices together with angels and archangels and all the company of heaven before the triune God. When we face East together we participate together, we pray together, we offer together. This is the Eucharistic vision–the Church offers herself and her gifts unto the Giver of Life.

I could go on for pages—and perhaps I will later—but for now let us suffice it to say that our bodies, hearts, and minds should all face the same way. Even in celebrating versus populum may we look Eastward and expect the Lord’s return. Christ has died. Christ is risen. Christ will come again. Jesus is our Great High Priest and the Celebrant of the Eucharist, may we look to him and see him. 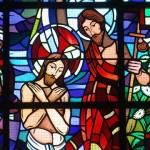 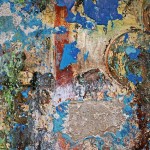 June 28, 2016 Guest Post: Ressourcement and Renewal
Recent Comments
0 | Leave a Comment
Browse Our Archives
get the latest from
Evangelical
Sign up for our newsletter
POPULAR AT PATHEOS Evangelical
1