This seems to be the popular rebuttal to those of us who are angered (and rightfully so, in my opinion) at Trump’s “temporary” travel ban. Now, ignoring the fact that this argument is big pile tu quote diaper stuffing, I’d like to go ahead and state my reasoning. Especially since I won’t be backing off my opposition to Trump any time soon.

The reason I didn’t raise a fuss in 2011 is because I was neither Catholic nor politically involved. At the time I was floating through life as a lapsed Baptist/Diest who was more concerned with graduating college, getting married, and scrounging up enough couch change for a pack of Pall Malls than I was with whatever the president was doing. I was also suffering through one of the most difficult times in my life, but that’s neither here nor there.

Simply put, I wasn’t paying much attention. But I am now.

Now, after further research, it seems that there are some pretty significant differences between what Obama did in 2011 and what Trump is doing now, and I’ll let the Washington Post give you the particulars.

But the only thing that matters is what I believe now. And that is, as a Catholic, Pro-Life, Left Wing loud mouth, I don’t care who is sitting behind the desk in the oval office. America is the richest, most powerful country in the world. If someone comes to our borders seeking refuge, a new start, and a better life, we don’t turn them away. We let them in. Because that’s what America is about.

We can screen. We can vet. We can exhaust every effort to make sure that the people coming to our country are coming without ill will. That’s fine with me. But we don’t close the door. And we don’t turn our backs.

And even if you strip away every American value I was raised to believe in, you still can’t escape the fact that Jesus Christ—my Lord, my Savior, and the central figure of my entire religion—was really, really clear about this.

When the Son of Man comes in his glory, and all the angels with him, he will sit upon his glorious throne and all the nations* will be assembled before him. And he will separate them one from another, as a shepherd separates the sheep from the goats.

He will place the sheep on his right and the goats on his left. Then the king will say to those on his right, ‘Come, you who are blessed by my Father. Inherit the kingdom prepared for you from the foundation of the world.

Then he will say to those on his left, ‘Depart from me, you accursed, into the eternal fire prepared for the devil and his angels. 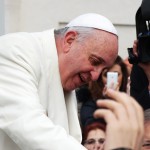 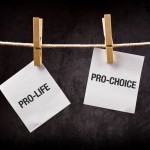 February 13, 2017 What Are We Even Talking About When We Talk About Abortion?
Recent Comments
0 | Leave a Comment
Browse Our Archives
get the latest from
Catholic
Sign up for our newsletter
POPULAR AT PATHEOS Catholic
1