In the Saturday afternoon session of LDS General Conference, Elder Quentin L. Cook of the Quorum of the Twelve Apostles gave a talk about humility. That, by itself, wouldn’t be anything extraordinary. Almost every General Conference features admonitions to avoid pride and to seek humility. But what was extraordinary was how Cook all-but-named U.S. President Donald Trump as an object of his admonitions.

Cook said, “So-called ‘authenticity’. . . sometimes leads to a lack of true humility.” He also said that we shouldn’t “[use] authenticity as an excuse for un-Christlike behavior.” The kicker? “Some misuse ‘authentic’ as a celebration of the natural man and qualities that are the opposite of humility.”

Now, who does this remind us of? Give up? Why, Trump of course! Throughout his campaign and into his presidency, one of the things that people praised about the Donald was his “authenticity.” In fact, an exit poll conducted during the South Carolina primary found that “78 percent of voters who said ‘tells it like it is’ was the top quality they’re looking for in a candidate said that they supported Trump.”

Never mind that what Trump was “authentic” about was his Islamophobia, racism, and disrespect for Constitutional norms and civility.

Anyway, with “authenticity” being an adjective that has most recently, and most widely, been applied to Trump, it’s hard to see Cook’s castigating of it as anything other than a condemnation of Trump’s behavior and those who would see Trump’s braggadocio as a sign of strength.

Also, did I mention that Cook talked about how he was impressed by how Alma the Younger stepped down as head-of-state? Interesting . . . 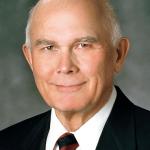 September 30, 2017
What Elder Oaks Didn’t Say: The Role of Spouses and Parents
Next Post 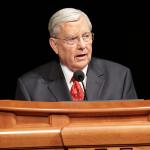