In my previous post, I said that while I am not an “Annihilationist,” I do see enough biblical support for this position to qualify it as an Evangelical option. I have not yet had the time to clear my desk to engage in prayerful, 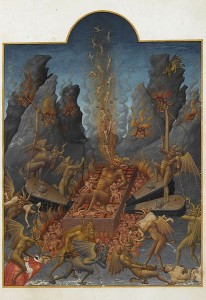 thorough, painstaking exegesis to have landed on this position. But from what I have seen, there’s a good deal of sound, biblical arguments for it.

Before we examine these, we need to know what it is we’re even talking about.

Rightly understood, the annihilation view of hell says that there will be irreversible, horrific punishment for those who don’t believe in Christ. This punishment may last for a period of time, but ultimately it will end. The wicked will pass out of existence; they will not be tormented forever and ever.

This view is usually referred to as “conditional immortality” by its proponents, since immortality is a gift given to the righteous in Christ (see below). But as statement in my previous blog, I actually prefer the term “terminal punishment” instead of conditional immortality (which is still unfamiliar to many) or annihilation (which has too many negative connotations). To be clear, annihilation (hereafter “terminal punishment”) is not a product of Jehovah’s Witness theology. While it’s true that JW’s hold to this view, this doesn’t mean that they invented the doctrine nor does it mean that those who hold to terminal punishment are Jehovah’s Witness. I’m sorry to waste your time with this basic point, but I’ve actually heard people assume I’ve become Jehovah’s Witness because I see biblical support for terminal punishment. Yikes! Does that mean that I’m also Muslim because I believe in the sovereignty of God? Or Buddhist, since I believe in nonviolence? One of the more comical assumptions was from someone on Facebook who thought I might now be an atheist because they heard that I was “an Annihilationist.”

Come on, people! We must use our brains. And our Bibles. It’s a sad day in Evangelicalism when accusations and name-calling replace authentic study of God’s inspired word.

Plus, the duration of hell is not listed in the Apostle’s Creed nor the Nicene Creed—the basic standards of orthodox Christian doctrine. And while ECT has been the dominant, though not universal, Christian view, terminal punishment has been the view of several prominent Evangelical theologians throughout history.

In any case, here are some of the strongest biblical arguments in favor of terminal punishment:

First, most of the passages in the NT that talk about the fate of the wicked use language that suggests finality. Here’s just a small sampling:

We could add to this list several other images that would also suggest the cessation of life for the wicked. Images such as:

Let’s pause for a second. Look up some of these passages if you need to. Lay aside your assumptions as best you can and consider these points. These biblical points. I’m not saying you need to embrace this view—I haven’t embraced it yet. But any fair-minded, Bible-believing Christian should at least pause and say, “Huh, wow, a plain reading of those texts would suggest finality.”

In a recent debate between on the nature of hell between Al Mohler (ECT) and Chris Date (Terminal Punishment), Date kept giving exegetical argument after exegetical argument, and Mohler simply referred to Date’s arguments as “not the traditional reading” and clear evidence of “interpretive calisthenics.” Maybe I’m completely blinded, but is it “interpretive calisthenics” to say that destruction, death, perish, end, burned up chaff, and the destructive of Sodom and Gomorrah may actually suggest finality and not ongoing torment? Certainly, we’ll get to the counterarguments from the ECT position. But when we hear of someone embracing terminal punishment in light of the Scriptures, we should at the very least stop mocking the arguments without actually refuting them. You can acknowledge that a particular view has some good biblical merit without actually embracing it.

Second, the Bible says that the gift of immortality is only given to believers who are in Christ (see (1 Cor 15:21-23, 50-54; 2 Tim 1:10). That is, immortality (i.e. living forever) is not inherent to humankind. The soul is not inherently immortal, so ECT can only work if God miraculously gives a type of immortality to the wicked at their resurrection. But this is never clearly stated in Scripture. Immortality is only given to believers. And remember Genesis 2, where “living forever” was conditioned upon eating from the tree of life (which shows up again in Rev. 22).

What’s interesting is that Augustine, who was by far the most influential advocate for ECT, believed that the soul was immortal. (His view was carried over from his Platonic past.) For him, terminal punishment wasn’t even an option. The soul, which lives forever, must either live forever in heaven (or the new creation) or live forever in hell. ECT was the only real option for Augustine and his view was more or less embraced for the next 1,000 years.

Third, the language of “eternality” (aionios) doesn’t always (or usually?) convey the idea of never-ending time. Notice, for instance, some of the Septuagint uses of the Greek word aionios:

So when we come to passages like 2 Thessalonians 1:9 where Paul talks about “eternal destruction,” this doesn’t have to mean “the ongoing, never ending act of destroying which is never final,” but it could very easily mean “a destruction characteristic of the ages.” Or even if aionios does signify never-ending time, when joined with olethron (“destruction”), it could mean that the destruction is final; that is, it will never end or be reversed.

The sum up this point, the word “eternal” (or better: “everlasting”) may refer to ECT, but it could also simply refer to the finality or completeness of the destruction or to its other worldly nature—it’s a “destruction of the ages,” or “not of this world.” Either way, it does not unambiguously refer to ECT.

I know, I know. Some of you will still say that this is interpretive calisthenics. But I disagree. This is simply the possibility of the Greek language. Again, to be clear, I’m not saying that terminal punishment is the only way, or even the best way, to interpret 2 Thessalonians 1:9 or Matthew 25:46. I do think, however, that it’s a perfectly legitimate way of understanding how the Greek adjectives and nouns can function. Only those who are conditioned to read ECT into these texts will say that they can only be interpreted to mean eternal conscious torment.

I’ve got some thoughts on the “weeping and gnashing of teeth” and “undying worm” images, but why don’t we stop here. There’s a lot to digest. But stay tuned, we’ll keep talking about hell, but I promise you: This series won’t last forever. It will terminate at some point in time.

February 4, 2015 Biblical Arguments for Eternal Conscious Torment
Recent Comments
0 | Leave a Comment
"I just want to point out to current readers that EBC is now fully accredited ..."
Shannon Tristal Why I Love Eternity Bible College
"I don't think God killed Jesus; but I am beginning to think someone killed Preston ..."
Caspian Did God Kill Jesus?
"I remember reading a book written in the late 1940s that claimed young people at ..."
ThoughtorTwo . Why Are Millennials Leaving the Church ..."
"First of all, this was from almost a year ago. Second, if Jesus is going ..."
Hilary Jesus Was a Jew: Understanding Jesus ..."
Browse Our Archives
Related posts from Theology in the Raw