In my previous post, I summarized some of the strongest biblical arguments in favor of terminal punishment. In this post, I want to summarize the best 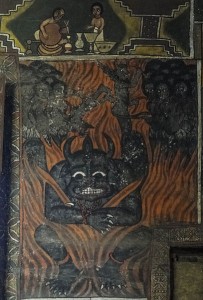 Let me begin with some of the weaker, though common, arguments that are often given for ECT.

First, the images of “weeping and gnashing of teeth” (Matt 8:12; 22:13: 25:30; Luke 13:28) and the “undying worm” (Mark 9:48) are often cited to prove that the act of punishing will never end. But I think this is a bit of a stretch, or at least it’s not that clear once you consider these passages more closely. The passage never says that “there will be never ending weeping and never ending gnashing of teeth that keep on gnashing, and gnashing, and gnashing.” And since there will no doubt be toothless unbelievers in hell, perhaps this is nothing more than an image that shouldn’t be taken literally. In the Bible, the “gnashing of teeth” signifies anger (see Acts 7:54), and weeping signifies suffering. The basic meaning is that those who go to hell will hold on to their rejection of God and will suffer for their choice. It doesn’t specify the duration of that suffering.

Then there’s the “undying worm” and “unquenchable fire” image in Mark 9:48, which, rather importantly, comes from Isaiah 66:24: “For their worm shall not die.” But look at the first part of the Isaiah verse, where it clearly says that the worm is feasting on dead bodies. The image—and I do believe it’s an image and not a literal picture, unless worms too get resurrected worm bodies that will live forever and ever—does not refer to worms feasting on bodies that are alive and being tormented forever, but on the wicked who are destroyed by God (see Isa 66:16). Their death is final.

Even though these images are often used to support ECT, I don’t think they are very good arguments in favor of this view. We shouldn’t read ECT into ever passage where “undying” is mentioned, or where we see the wicked being punished or suffering. Those who believe in terminal punishment very much agree that there will be suffering and punishment in hell.

Second, the parable of the rich man and Lazarus in Luke 16:19-30 clearly shows that the rich man is “in torment” (16:23) and “in anguish in this flame” (16:24). However, this passage is talking about hades (16:23) and not hell. And they are different. Hades is an intermediate state for the wicked between death and resurrection—a resurrection that will lead to judgment (Dan 12:2) and then the punishment of hell. This is not a point of dispute among Evangelical scholars who hold to ECT. However, some still assume that if there is torment in Hades, there must also be never ending torment in hell. But this is just that: an assumption read back into Luke 16. It’s not derived from Luke 16, since Luke 16 isn’t talking about the final state of the wicked in hell.

Maybe this is true, or maybe it’s not. Maybe pink bunnies would turn blue if I held them underwater for more than 7 minutes. I don’t know. What I do 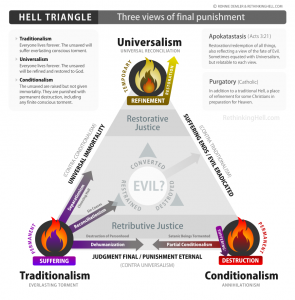 Okay, so what are the best arguments for ECT?

First, the strongest passage that supports ECT is Matthew 25:46, which I’ve cited in the previous two blogs. Here we go one more time: “And these will go away into eternal (aionios) punishment, but the righteous into eternal (aionios) life.” ECT advocates say that the parallel between “eternal” life and “eternal” punishment must mean that the act of punishing will last forever since the life given to the righteous lasts forever.

I think this is the strongest passage in favor of ECT, although, as previously stated, there are some valid exegetical responses by those who hold to terminal punishment.

And another angel, a third, followed them, saying with a loud voice, “If anyone worships the beast and its image and receives a mark on his forehead or on his hand, he also will drink the wine of God’s wrath, poured full strength into the cup of his anger, and he will be tormented with fire and sulfur in the presence of the holy angels and in the presence of the Lamb. And the smoke of their torment goes up forever and ever, and they have no rest, day or night, these worshipers of the beast and its image, and whoever receives the mark of its name.”

This passage, of course, is shrouded with interpretive questions. Are the people who are tormented all the wicked who are in hell, or just a subset of the wicked who “worships the beast and its image and receives the mark” on their foreheads? Is this talking about some great rebellion during the first century, or during an end-time tribulation? If they are tormented “in the presence of the holy angels and in the presence of the Lamb,” then what do we do with other passages that seem to say that the wicked in hell exist away from the presence of God (e.g. Matt 25:41; 2 Thess 1:9; Jude 13)?

In any case, ECT advocates point out that “the smoke of their torment goes up forever and ever, and they have no rest, day or not.” The last line is, to my mind, the only part of this passage that may suggest ECT—“no rest, day or not.” The first part about the smoke going up forever comes from Isa 34:10 where it clearly emphasizes the finality of the destruction (of Edom) and not the never ending torment of the city of Edom. I’ve been to Edom. Trust me: It’s been destroyed. If John of Revelation 14 wants to use the Isa 34 image differently, he can certainly do so. But the burden of proof rests on those who interpret the image in Rev 14 in a manner different than its original meaning in Isa 34. The most natural meaning of the never-ending smoke, based on its original meaning in Isaiah, is terminal punishment.

Third, ECT advocates point out that the language of “destruction” (or “perish,” Greek: apoleia or olethros) doesn’t have to mean “pass out of existence” but can simply mean “ruin” or “to end the original function of something/someone.” For instance, Jesus says that if you put new wine into old wineskins, both the wine and the wineskins will be “destroyed.” Certainly Jesus doesn’t think the wine and wineskins will be blasted into oblivion upon contact. The word “destroy” doesn’t have to mean “annihilate.”

Now I want to remind you, although you once fully knew it, that Jesus, who saved a people out of the land of Egypt, afterward destroyed those who did not believe. And the angels who did not stay within their own position of authority, but left their proper dwelling, he has kept in eternal chains under gloomy darkness until the judgment of the great day— just as Sodom and Gomorrah and the surrounding cities, which likewise indulged in sexual immorality and pursued unnatural desire, serve as an example by undergoing a punishment of eternal fire.

ECT advocates say that “a punishment of eternal fire” refers to the eternal conscious torment of unbelievers. However, if you look at the whole context closely, you’ll see that it’s no so clear. Verse 5 talks about the “destruction” of those who didn’t believe, which parallels the destruction of Sodom and Gomorrah, which was…well…a destruction and not a never ending torment of those cities. Again, you can visit the historic locations of Sodom and Gomorrah. There ain’t anything there. And the parallel in 2 Peter 2:6 says this clearly, where God turned “the cities of Sodom and Gomorrah to ashes he condemned them to extinction, making them an example of what is going to happen to the ungodly.”

Question: What’s going to happen to the ungodly according to Peter?

Answer: They will be condemned to extinction just like the earthly cities of Sodom and Gomorrah.

In summary, there are some good arguments in favor of ECT and also, to my mind, some not so good arguments that appear to have been used without much thought. Again, I haven’t had time to examine all of these arguments or the many texts in detail. All I’m doing is summing up some of the standard points on both sides and giving some initial thoughts. Even still, when I do, it seems like the weight of the evidence falls in favor of terminal punishment and it does feel, to my mind, that many people who assume ECT haven’t really considered the other view very closely. In short, terminal punishment does not clearly spring from every single passage about future judgment, but it does seem to be the best reading of the large majority of them.

Stay tuned for one more blog where I’ll try to wrap things up.

February 9, 2015 My Terminal Blog on the Terminal Punishment of Hell
Recent Comments
0 | Leave a Comment
Browse Our Archives
get the latest from
Evangelical
Sign up for our newsletter
POPULAR AT PATHEOS Evangelical
1 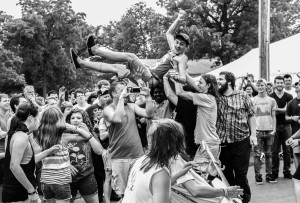