What we debate is becoming less important in Christian circles than how we debate.

To the ears of many, both in the church and out, Christians have collectively become 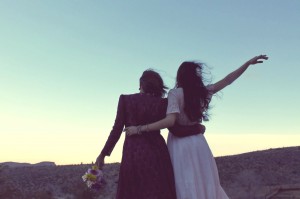 clanging cymbals. We are easily dismissed because we often rip our own kin apart for trivial reasons. Blogs and microphones have become tools of warfare as we beat others down over disputable matters. There’s a place for passionate disagreement. But there’s never a place for dehumanizing rhetoric, straw man arguments, or ad hominem attacks.

It’s time for our communication to change.

Over the coming few weeks the two of us—Preston Sprinkle and Jeff Cook—will be discussing a very contentious issue. We disagree on a variety of fronts and hold our views passionately, but we also wish to make every effort to do what leads to peace and mutual edification.

As such, we will begin this series of posts not with our differences but with a celebration of our common baptism and devotion to the Lord Jesus. We have no interest in kicking one another off the island or scoring quick points with the twitter-verse. Instead we welcome one another’s perspective on the scriptures because over the past few years we have both come to learn a great deal about God, our own positions, and the community of believers from our conversations. Most of all, we’ve become good friends. We both respect each other and enjoy each other’s presence.

What we say in the following posts may not be terribly new. But we do hope to showcase in a health-promoting way how brothers and sisters can communicate through emotionally charged issues.
So lets begin with the places we agree:

Though we disagree on several issues related to homosexuality, we champion each other, trust each others’ motives and judgment, and look forward to seeing Christ more clearly through these posts.

Over the next few weeks we will discuss a single question: Are monogamous same-sex relationships prohibited by the New Testament? Although the whole Bible is relevant for the discussion, we will focus on the New Testament.

Over the course of a month, we will alternate making arguments for our position. Jeff will give an open argument on Monday, and Preston will follow up on Wednesday. Each opening argument must be approximately 2,000 words and won’t be seen by the other respondent before it’s posted. We will then take turns responding to each other’s statement, and continue to dialogue through ongoing counter-responses. Expect 3 posts a week, 10 posts for the totality of the discussion.

Readers are encouraged to make constructive, humanizing, honorable comments; however, please read the comment policy above. We’re going to be especially ruthless in weeding out all snarky, angry, childish, and dehumanizing comments, since one of our primary goals is to model a better way to dialogue.

Here are our quick bios and reasons we want to spend time on this topic:

Jeff Cook – I teach philosophy at the University of Northern Colorado and pastor a church in Greeley. I have written a pair of books on following Jesus and the moral life. I long for those I love to see and experience the Jesus I love and experience. This topic is worthy of discussion because it showcases one significant place Christians often misunderstand how the Bible speaks about the ethical life. Much work has been done repainting the Christian ethic by thinkers like Dallas Willard and NT Wright, and it is time to reimagine homosexuality in light of the New Testament’s normative ethic: virtue and life that reflects Christ.

Preston Sprinkle—I’m the Vice President for Eternity Bible College’s Boise extension and the author of a forthcoming book on homosexuality tentatively titled, People to Be Loved (Zondervan 2016). I believe that the church needs to stop thinking of homosexuality as just some issue to be discussed, but people to be loved. And I don’t think that a traditional sexual ethic mutually excludes radical, Christ-centered sacrificial love toward LGBTQ people. I believe this topic is incredibly important, because people are incredibly important.

April 13, 2015 The New Testament and Gay Sex
Recent Comments
0 | Leave a Comment
"I just want to point out to current readers that EBC is now fully accredited ..."
Shannon Tristal Why I Love Eternity Bible College
"I don't think God killed Jesus; but I am beginning to think someone killed Preston ..."
Caspian Did God Kill Jesus?
"I remember reading a book written in the late 1940s that claimed young people at ..."
ThoughtorTwo . Why Are Millennials Leaving the Church ..."
"First of all, this was from almost a year ago. Second, if Jesus is going ..."
Hilary Jesus Was a Jew: Understanding Jesus ..."
Browse Our Archives
Related posts from Theology in the Raw

Did Prince Charles try to force his mother...
My wife and I started Season 5 of The Crown over the...
view all Evangelical blogs
What Are Your Thoughts?leave a comment
Copyright 2008-2021, Patheos. All rights reserved.
Close Ad