Don’t Push the Ladder: A Response to Jeff Cook about Gay Sex

The following is part 3 of 10 in the dialogue/debate between Jeff and me about the Bible and same-sex relations. In this post, I respond to Jeff’s opening argument.

My friend Jeff Cook has written a provocative and challenging post regarding same-sex relations and New Testament ethics. His argument is both fresh and original. Indeed, I learned a great deal about how deontological and virtue 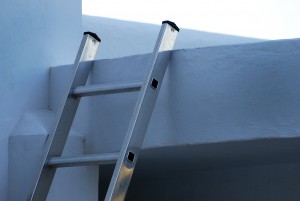 ethics coincide and where they diverge. Many thanks to my friend for pushing me to think harder about how to understand the commands of the New Testament.

And there are a lot of thoughts that could follow that transition. Since I will post my own argument on Monday (4/20), I’ll only address a few key points in Jeff’s post. Let me acknowledge up front that my background is in biblical studies; I’m not an ethicist like Jeff. This can be a blessing and a curse—the curse being that I try to refute an argument that I don’t really understand, not being well-versed in the specific categories that Jeff is arguing within. That said, I’ve read Jeff’s post several times and I still keep coming back to a few points that I think were overstated, misstated, or lacked biblical evidence. Here are a few that stand out.

Jeff said that “the New Testament writers rejected a system of morality focused on rules” and that the Scribes and Pharisees were “sons of hell” even though they were “meticulous rule followers.” Throughout the post, Jeff appeared to compare these “rule followers” with Christians who uphold, cherish, and obey—even after they climb the ladder (see below)—the divine commands contained in the New Testament. This connection seems to be important; indeed, a main thread in Jeff’s argument. Tug on this thread and the whole sweater becomes undone.

Neither Jesus nor the New Testament writers “rejected a system of morality focused on rules.” That’s not what they were saying when they said “we are no longer under the law” (Gal 4) or “you have heard it was said…but I say to you” (Matt 5). Jesus didn’t critique the Pharisees for obeying too much, but too little; for “break[ing] the commandment of God for the sake of [their] tradition” (Matt 15:3). Call it legalism. Call it hypocrisy. But don’t call it too much obedience God’s actual commands. Yes, Jesus’s opponents may have been “meticulous rule followers”—but it was their own rules, not God’s, that made them “sons of hell.” I can’t think of any place between Eden and the New Jerusalem where too much obedience to God’s instruction (Heb: Torah) brought condemnation.

The same is true of Paul. Paul never critiqued “rule following” per se. He never said, as Jeff seemed to say, that Paul replaced “rule following” with “walking by the Spirit,” as if it’s an either/or option. Rather, Paul argued extensively that the Spirit is the empowering gift of the new covenant that enables believers to actually obey God’s rules (Rom 2:26-29; 7:7-8:11; 2 Cor 3:3-7). I’ll save you a dissertation here (mine happened to be on this topic), but this is precisely what Ezekiel 36:26-27 says.

It’s true that there is some discontinuity between the old and new covenants in terms of which rules God’s people should follow. Indeed: my belief in nonviolence depends on such discontinuity! But the New Testament makes clear which rules were designed for Israel living in Canaan (i.e. food laws, circumcision, etc.), and which ones are for a multicultural band of exiles living in the midst of empires (i.e. turn the other cheek). The elephant-in-the-room observation with regard to same-sex relations, of course, is that the New Testament does not reverse, tweak, modify, or move beyond the Levitical prohibitions against same-sex relations (Lev 18, 20). Quite the opposite—as we’ll see on Monday.

You can probably see where I’m going with all of this. As many of you probably thought as you read Jeff’s post, I think that he’s making a false dichotomy between good character (virtue) and the commands that shape such character (deontology).

For instance, Jeff argues: “the moral life the New Testament prescribes does not target what you do; the early Christians cared first and foremost about who you are.” But I would say that they target both what you do and who you are, because who you are and what you do are not at odds; the latter will flow from the former. Again, Jeff argues: “the New Testament invites us to reflect the goodness and moral health of God, and God is not good because God follows a set of rules.” Agreed. Amen. Let’s close in prayer. God is not good because He follows rules. But don’t His rules (not the Pharisees’) flow from His goodness? I’m just not convinced that any first-century Jew (or Jewish Christian) would think that a good God could give anything other than good rules. Good rules that are good for us to obey if we desire the good life.

So while I might agree that “[a]ction-focused commands are ladders we climb,” I’m not convinced, as Jeff says, that we climb them “in order to push them away” and I really don’t think that “once you become virtuous rules no longer matter.” My six year old has a quite virtuous character, but when he zooms off on his bike into oncoming traffic, I immediately yell, “Stop!” I give a command, a rule. I don’t just watch his virtuous character get smacked by a Dodge Ram. The goal, of course, is not that he would become just a bike-riding robot with quick-braking reflexes. Yes, the command is a means to an end (in this case survival). But I find it hard to separate a virtuous character from the rules that flow from our good and perfect Father. Stopping our bike so we don’t get run over is a good rule, and we

should obey it whether we desire to or not. I don’t think we can push the ladder away. Perhaps the ladder (rules) is more of a fire-escape that’s attached to the building (virtue), or, perhaps, like the structure pictured to my left that simply can’t pushed away. It’s interwoven into the building itself.

I have much more to say, but let me briefly address one more bit of Jeff’s post that I had trouble with. It has to do with his syllogism toward the end. It goes as follows:

(2) The good life displayed in the New Testament is the virtuous life.

Then it necessarily follows that the New Testament does not prohibit monogamous gay relationships.

Maybe it’s me; maybe it’s my lack of philosophical training. But I don’t see anything compelling about this syllogism. Maybe I’m missing something. Indeed, I probably am and would love for Jeff to expand a bit more on what he’s arguing for here. For one, doesn’t the New Testament itself get to define what is “the virtuous life?” It seems rather subjective to not let New Testament rules have a voice in determining virtuous behavior, unless the ladder has been set up against the wrong building. I can’t imagine Jesus, Paul, or any other Jew placing such a thick wedge between a virtuous character and the rules that help shape it.

I also wonder how many other phrases could be inserted in the place of “Monogamously committed homosexuality.” Let’s try “a rich man who doesn’t give to the poor.” We’ll call him Generous Jack. G.J. makes 10 million dollars a year, and yet he doesn’t give a penny of it to the poor or organizations that help alleviate poverty. However, he has a very generous heart. He actually gives away tons of money: to his family, to people who only make ½ a million dollars a year, and to various organizations that engage in cancer research. He displays many virtues, including generosity. He used to give to the poor in the past (the ladder) but he has since pushed that rule away, since he’s now a generous person.

My question, then, is: Since Jack has become a generous person, does he no longer need to obey the NT commands to give to the poor?

My own response to Generous Jack would be this: generosity is defined by Scripture, in part, as giving to the poor (2 Cor 8-9; Matt 25; and a gazillion other passages). In the same way, a virtuous sex life is defined by, in part, the rules that inform us about sexual immorality. It’s neither compelling nor healthy for humans to determine what a virtuous sex life is while muzzling our Creator’s Torah (“instruction”) about sex.

Much more to say, but I’m already past my word count. I want to thank my friend Jeff again for his challenging post. I look forward to our dialogue!

April 17, 2015 The Target of the Rules
Recent Comments
0 | Leave a Comment
"I just want to point out to current readers that EBC is now fully accredited ..."
Shannon Tristal Why I Love Eternity Bible College
"I don't think God killed Jesus; but I am beginning to think someone killed Preston ..."
Caspian Did God Kill Jesus?
"I remember reading a book written in the late 1940s that claimed young people at ..."
ThoughtorTwo . Why Are Millennials Leaving the Church ..."
"First of all, this was from almost a year ago. Second, if Jesus is going ..."
Hilary Jesus Was a Jew: Understanding Jesus ..."
Browse Our Archives
Related posts from Theology in the Raw