My Reflections on the Charleston Shooting

My Reflections on the Charleston Shooting June 19, 2015 Preston Sprinkle

I instantly got sick to my stomach after hearing about the massacre in Charleston last Wednesday. How in the world could 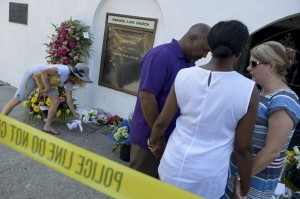 a human being gun down 9 fellow human beings while sitting in a church? My heart was saddened and my stomach was sickened at the thought of such violence and racism.

I didn’t want to respond right away, because it took me a while to reflect on the tragedy. But after letting the event simmer—and fester—I wanted to respond with a couple thoughts.

Until you rejoice at the prospect of your white daughter marrying a black man;
Until you submit to your pastor who’s a different race than you;
Until the music at your worship service reflects the genre of a myriad of ethnic preferences;
Until you delight in back people and brown people moving into your pristine neighborhood;
Until you stop clutching to your purses when you pass by a dark skinned man with baggy pants;
Until your worship gatherings reflect the ethnic diversity of your local community;
Until you stop saying, “I’m not racist, but…”

You might be a racist. You may not be a card-carrying member of the KKK, and you may not think you prioritize your own ethnic superiority, but deep down in your bones is the belief that black people or brown people or white people are some sort of “other.” What happened at Charleston is one radical manifestation of a much deeper problem. Veiled or suppressed racism is just as dangerous—if not more—than explicit racism. At least explicit racism we can nip in the bud. But implicit racism, which burrows its Satanic head deep in the fabric of our bones—only manifests itself when anger and insanity unleashes its power.

Second, violence. I don’t want to open up the whole gun control debate, but some of the responses to the Charleston massacre have been misguided and unhelpful. Even though I’ve voiced my opinion about violence, I actually have not sorted through the complicated and often heated discussion about gun control. I personally own several guns. Some I use for hunting, others for target shooting. And I’m currently looking to buy a handgun for defense against wolves and bears when I’m backpacking deep in the forest. But I don’t own guns to “defend” myself against people. If someone broke into my house, it would be impossible for me to shoot her or him. But since Jesus has already secured my family’s victory, it’s impossible for us to be defeated by evil.

Anyway, the tragedy at Charleston has, yet again, sparked the whole question: If the congregants were packing, would they have saved lives by killing the killer? Those who say yes cite examples where a gun owner killed a killer and saved lives, while those who say no will cite examples where a gun owner brought harm on an innocent person (usually a child who discovers the gun in their home). Personally, this kind of circumstantial evidence isn’t enough to base your opinion on. You can always find evidence to justify your view. What we need to do is argue in principle whether the Christian response should be confronting violence with violence. Is the Christian response to kill our enemies?

I would argue, and have argued, that there is much more power in a cruciform, sacrificial, Jesus-shaped life than a violent vengeful response to your enemies. Addressing the gun control question with a utilitarian “whatever works best” should not be the end-all answer. And, most importantly, a violent response to does not reflect the pattern of the life, death, nor resurrection of Jesus. If Jesus used an American ethical approach to evil, then we’d all be done for.

The racist young man who gunned down 9 beautiful souls in Charleston will stand before the perfect Judge and give an account. Until then, we should pray for his soul, seek his redemption, weep with those who mourn their losses, and embody the cruciform love of the one who died for his enemies and cried out from his cross: “Forgive them Lord they know not what they do.”

*This blog has been edited on 6/20 from its original version, which was posted on 6/19. The original blog talked about gun control in ways that were unhelpful to this much debated topic.

July 7, 2015 40 Questions minus 1 for Those Who Have 40 Questions
Recent Comments
0 | Leave a Comment
Browse Our Archives
get the latest from
Evangelical
Sign up for our newsletter
POPULAR AT PATHEOS Evangelical
1