Ken Wilson has written a very important and provocative book on homosexuality and the church. Ken is the founding

pastor of Vineyard church in Ann Arbor, Michigan, and has been thinking about questions related to homosexuality and the church for many years. In 2014, he published his A Letter to My Congregation with the provocative subtitle: An evangelical pastor’s path to embracing people who are gay, lesbian and transgender into the company of Jesus.

I was very challenged by Ken’s book and took copious notes as I was reading it. I would highly recommend it to any thinking Christian, not because I agree with everything in it—as my next two blogs will show, I don’t—but because he approaches the topic with the heart of a pastor and the mind of a scholar. Ken is obviously a very sharp thinker and displays a passionate love for Jesus and people. He appears to be one of those guys you’d want at your bedside if you had a few hours left to live. And his approach to homosexuality reflects such radical, cruciform empathy.

The so-called “third way” that Ken proposes tries to get beyond the non-affirming/affirming divide. “It’s a way to fully include people who are gay, lesbian, and transgender in the life of the church, while recognizing that the church has not yet resolved the question of the morality of gay relationships” (pg. 81). Or again: “A third way departs from the ‘open and affirming’ and the ‘love the sinner, hate the sin’ approach by regarding the question of whether and how the biblical prohibitions apply in the case of monogamous gay relationships as a ‘disputable matter’ in the Romans 14-15 sense” (pg. 112). As Ken points out, the apostle Paul navigated some turbulent moral waters when he talked about the “strong” and “weak” brother living in unity (Rom 14). The issue they divided over had to do with some serious issues such as idolatry (eating food sacrificed to idols) and Sabbath keeping—two of the Ten Commandments. These were not some secondary issues like the timing of the rapture or mode of baptism. They were of massive importance to the Jewish—and now Christian—faith. And rather than laying down the law about which party was right, Paul argued for acceptance and unity.

Ken, therefore, looks at how Paul settled disputed matters in Romans 14 and uses it as a paradigm for how the church should discuss and live with the different opinions about same-sex relations. “A third approach says, ‘We can agree to disagree on this question’ without separating from each other. We can hold our respective positions as firmly as our conscience dictates. But we have chosen not to treat this matter as something we have to hold in common in order to share a true unity of the Spirit…Acceptance is the key biblical demand of a third way” (p. 113).

To show that the church is capable of such acceptance in disputed matters, Ken points out that the whole “remarriage after divorce” question has been treated with remarkable leniency and grace among Christians. “When a divorced person remarries they enter a relationship that is immoral. This is precisely the argument used to rule out gay unions” (p. 142). Pastors have somehow been let off the hook by advocating for a divorce/remarriage ethic much more lenient than what we see in Scripture. So why can’t they do the same with the whole gay marriage question? More pointedly: when a wife divorces her deadbeat, verbally abusive husband and remarries a wonderful, loving Christian man, the Scriptures say she’s in sin. (At least, according to Wilson, the Scriptures don’t allow her to divorce.) But the church gives her grace and often says she made a righteous decision.

Since the church has been able to maintain unity among Christians with different views on remarriage after divorce and extend grace to those who don’t follow the Bible’s strict marriage ethic, then can’t we treat the gay marriage question with the same flexibility and grace? Or are we just as hypocritical as the Pharisees?

You’ve got to admit, it’s a pretty stinking good question.

There are many things I like about the book, and yet many things I disagree with (or at least have serious questions about). Again, what I loved most about Ken’s book is that he approached the question of homosexuality not as some theoretical issue that we should debate; rather, he treated it—as every Christian should—as people to be loved. I can sense a genuinely wrestling match going on in Ken’s heart between the historic Christian witness against same-sex relations and the real love and faithfulness that radiates from same-sex couples. His heart was heavy as he wrote this book, as was/is mine as I write about homosexuality. He didn’t set out to win an argument but to humanize a discussion. And for that, I thank Ken Wilson for this valuable contribution.

I do have several questions or pushbacks to his book, however. Most of these I’ll tease out in the next two blogs. But I want to end with something that reoccurred throughout his book. It seemed to me that Ken caricatured the traditional view and painted it in a somewhat negative light. As if every “traditionalists” fits the description of the traditional view he summarized. 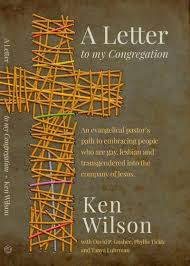 should be excluded if they perform a certain specified set of sexual behaviors; his list of such sexual behaviors is just shorter than most historic and global Christians (see e.g. pp. 17, 84, 90). For instance, Ken says: “Enforcing exclusion is a responsibility of leadership and to neglect it can cause its own harm” (p. 90). So framing the two views as the “inclusive” people versus the “exclusive” people is wrong headed. We’re all exclusive on some measures. The question is which ones, and why.

Again, Ken wonders: “…why should our unity in the Spirit be based on something more than the gospel? In fact, it seems to short circuit a path that more powerfully reveals what it means to be accepted by God because of the gospel of Jesus Christ” (pg. 17). This sounds really good and is certainly provocative, but to be accepted by God in Jesus Christ (the gospel) means that we have been accepted into a broken community seeking holiness through repentance. Failure, forgiveness, grace, and the pursuit of godliness saturate this community—a community that’s been created and sustained by the “good news” of a Jewish Messiah who died to make us alive to God through the Spirit in obedience.

In other words, we can’t separate the radical acceptance of the gospel without embracing the demands of the gospel—demands which have historically included a sexual ethic that rules out same-sex relations. These are not conditions of salvation, of course, but they are acts of obedience that shape the community that Christians are saved into.

Moreover, does the traditional view “exclude gay people?” Like, all of them? If you’re gay then you’re not allowed in church? Throughout the book, Ken rarely talks about gay people who maintain a traditional Christian sexual ethic, those who maintain a gay identity and yet still believe that same-sex sexual behavior is wrong. Ken does talk about the need to honor and respect (and believe) the testimony of those who have experienced “change” in orientation and those seeking to live celibate lives while remaining attracted to the same sex (pgs. 22, 46). However, he continues to frame the traditional view as effectively excluding “all gay persons” (60, 81, 90) from church. But that’s just not true. By framing it this way, he’s essentially making non-affirming gay people, who are seeking to live celibate lives, pursuing mixed-orientation marriages, or seeking celibate same-sex partnerships, to be “less gay” than those who are affirming and seeking same-sex marriage.

Well, based on Ken’s description of the third way—no. Perhaps I’m a fourth wayer? Or maybe a fifth? Or for the sake of numerical concision, perhaps we should talk about third ways rather than the third way. Maybe there is another way to maintain a traditional, non-affirming sexual ethic and promote the scandalous acceptance of Christ, where all people are welcomed and affirmed into a community seeking holiness and repentance. And humbly trying to figure out, in community, what that looks like.

Stay tuned tomorrow as I unpack some more queries and pushbacks I have with Ken’s book, beginning with his treatment of Scripture.

August 13, 2015 A (More Critical) Review of Ken Wilson’s “Third Way:" Part 2
Recent Comments
0 | Leave a Comment
"I just want to point out to current readers that EBC is now fully accredited ..."
Shannon Tristal Why I Love Eternity Bible College
"I don't think God killed Jesus; but I am beginning to think someone killed Preston ..."
Caspian Did God Kill Jesus?
"I remember reading a book written in the late 1940s that claimed young people at ..."
ThoughtorTwo . Why Are Millennials Leaving the Church ..."
"First of all, this was from almost a year ago. Second, if Jesus is going ..."
Hilary Jesus Was a Jew: Understanding Jesus ..."
Browse Our Archives
Related posts from Theology in the Raw