Eunuchs: Male, Female, Or Other? 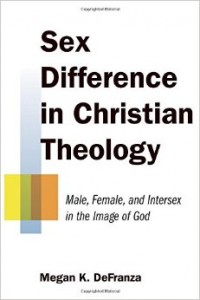 Difference in Christian Theology. As previously stated, Megan has offered a compelling argument that challenges the binary model of human sexuality. Some people are neither male nor female, Megan argues. And she views the “naturally born eunuch” (Matt 19) as the biblical basis for exploring the category of a third (or other) gender.

Jesus’ first type of eunuch—who has ‘been so from birth’—provides a biblical door through which theologians may pass to explore the contributions provided by intersex to current concepts of human personhood, identity, image of God, sex, gender, and sexuality (p. 70).

Megan spends the bulk of chapter 2 looking at eunuchs in the Bible and ancient world. She concludes that while “‘intersex’ and ‘natural eunuch’ are not univocal terms…people in the ancient world were more familiar with variations of sex development than many contemporary Christians are, and that they supplemented their binary model of human sex gender with the marginal category of the eunuch” (P. 103). For Megan, the existence of eunuchs shows that Christianity (the Bible and early church witness) believed in some sort of “third gender,” or a sexual other that didn’t fit the male/female binary. In later chapters, Megan goes on to explore the androgyny of our triune God, who is described as both Father and Mother, and whose Spirit is described with a feminine pronoun (pnuema in the Greek). Jesus Himself—or themself—may have been intersex: “the possibility of an intersex Christ reveals a confidence that Christ stands with the intersex, that ‘his’ humanity does not stand over against them, that Jesus is with them in their struggles for identity, for love, for acceptance, for wholeness” (p. 279).

Sorry, did I lose some of you? I know, the thought of an intersex Christ might be too much to digest. To be clear, Megan doesn’t come out and say that Jesus was intersex. She simply explores the possibility. In any case, this particular point isn’t crucial to her argument. Her main point is that the eunuch was believed to be neither male nor female. And this challenges (or destroys) the binary model of (only) two sexes.

So let me dive in with my first question. Okay, let’s just call it a cautious disagreement. And again, I’m very much open to the possibility that I’ve misunderstood Megan’s point, or that I’ve failed to recall some evidence she provides to support her point. But I’m just not convinced that the Biblical writers viewed the eunuchs as neither male nor female; a sort of sexual “other.”

Megan references a few ancient texts, but I didn’t find her evidence very comprehensive. Eunuchs were discussed all over the place in the ancient world. The Old Testament talks about them (Gen 37:36; 39:1; Gen 40:2-3; 2 Kings 20:18; cf. Is 39:7). Texts from the ancient Near East mention them. Greco-Roman writers discuss eunuchs in great detail. And in most cases, it seems clear that these writers considered eunuchs to be sexually male even if they didn’t always match up to the societal standards of masculinity.

The Romans classified eunuchs into three categories: spadones, who were infertile males from birth, thlibiae, whose testicles had been “pressed,” thladiae, whose testicles had been “crushed,” and castrati, whose unit was cut off or lost altogether. While these eunuchs may have defied the Roman standard of masculinity (which was phallocentric), they were still considered sexually male. The Old Testament likewise assumes that eunuchs were men. Maybe they had “crushed testicles” (Deut 23:1), but this assumes they had testicles that could be crushed. (I know, I’m squirming too.) Maybe they were infertile (Isa 56). Maybe they couldn’t get it up (like the poor guy in Sirach 30:19-20). Or, according to Juvenal, maybe they could—to the delight of the domina who was looking for some extra-marital fun without the risk of getting pregnant (Juvenal, Satire, 6.366-378). In any case, the large majority of texts that I’ve looked at show that eunuchs were considered biologically male, even though something wasn’t quite right below the belt.

Again, Eunuchs were most often considered sexually male even if they didn’t always match up to the societal standards of masculinity.

And this is confirmed in the most descriptive Biblical text about eunuchs—Isaiah 56:3-7. It seems rather clear that Isaiah refers to infertile men. He describes the eunuchs as “a dry tree” who through God’s redeeming act will have “a name better than sons and daughters.” In the ancient world, one’s “name” was passed on through his children. Infertile men couldn’t pass on their “name,” and this was socially shameful in the ancient (and biblical) world (Gen 38). Isaiah says that God will wipe away such shame and “give them an everlasting name that shall not be cut off;” cut off, that is, like their earthly reputation has been cut off by their infertility.

Eunuchs were marginalized. They didn’t fit the patriarchal ideal of having a bunch of kids to carry on their name. But God’s beautiful word to these eunuchs is that they will be included into God’s new work of redemption in spite of being considered an outcast due to their lack of ability to produce children.

Another passage that’s super important is Matthew 19:12 where Jesus references the “eunuch from birth.” Unlike Isaiah, Jesus doesn’t describe the eunuch. Is he infertile? Is he castrated? Is he/they some sort of third gender? The text isn’t clear. But Megan argues that “Matthew’s inclusion of Jesus’ provocative saying about eunuchs may have served as one more proof of Jesus’ identification with the messianic visions of Isaiah” (p. 82). That is, Matthew 19 has Isaiah 56 in mind.

But if Isaiah 56 describes the socially outcast infertile male, then Jesus probably has in mind an infertile male as well. And this appears to fit the context where Jesus is talking about marriage (Matt 19:1-10) and children (Matt 19:13-15), and even seems to affirm the binary model of Genesis 1 and 2 (Matt 19:4-6).

So I’m not yet convinced that the Bible presents eunuchs as opening up and validating a new sexual category.

To be clear, Megan recognizes that the term eunuch was flexible word, that it was used to describe a wide array of people depending on the context (e.g. some were castrated, some were born deformed, some were simply infertile or impotent). But when she leaves behind her chapter on eunuchs in the ancient world, she continues to refer to them as some sort of third biological sex—neither male nor female. She says that “ ‘eunuch’ remained a term of ‘in-between-ness’…a valuable third gender” (p. 103). Eunuchs were considered “sexually other” (p. 182). God’s people are “comprised of more than males and females…It includes eunuchs…It includes the intersexed who may be resurrected as intersex” as Paul says in Galatians 3:28: “You are all [male, female, intersex] sons of God through faith in Christ Jesus” (p. 184).

There are two ancient references (noted by Megan) that seem to support her thesis. The first one is from Augustine who describes castrated eunuchs as “neither changed into a woman nor allowed to remain a man” (p. 69 citing City of God 7.24). The other comes from the Tosefta (a Jewish commentary on the Mishnah), which applies male and female laws to the eunuchs (p. 80). As I read these texts, they do reflect the common cultural assumption that a man without a member was not really a man. I’m still not convinced that Augustine was trying to up a whole new category of a third biological sex. Maybe he was, or maybe he wasn’t. But from my vantage point, he only seems to play into the phallocentric view of masculinity: a statement about gender ideals rather than biological sex.

In short, it just seems like Megan has used one possible ancient meaning of “eunuch”— biologically neither male nor female, a meaning that isn’t clear from the Biblical text or most other ancient texts—and then goes on to assume this meaning throughout her discussion.

What seems clear to me, though, is this: Nowhere in the Bible is the eunuch described alongside the categories of male and female in a way that opens up a third biological sex. When eunuchs are described (especially Isa 56), they are still viewed as biologically male. The male/female binary isn’t challenged by the Bible’s own description of eunuchs. Even if the hyper-masculinized culture surrounding the Bible viewed men as less than real men whose members were chopped off, deformed, unformed, under-formed, or simply “out of order,” the Bible itself doesn’t play into such locker room talk, even though some early church theologians did.

Help me out here, Megan. What am I missing?

October 21, 2015 Are Adam (Male) and Eve (Female) the Only Options?
Recent Comments
0 | Leave a Comment
Browse Our Archives
get the latest from
Evangelical
Sign up for our newsletter
POPULAR AT PATHEOS Evangelical
1