In my last post, I summed up my challenge to the evangelical church about its approach 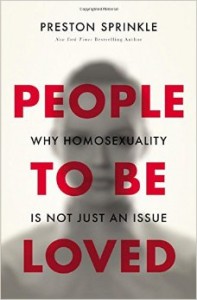 to homosexuality from my book People to Be Loved. I mentioned my first two challenges, which are: 1. Cultivate an environment where people who experience same-sex attraction can talk about it, and 2. Listen to the stories of LGBT people.

I want to continue our discussion by listing the next three challenges I give in my book. (I actually give 7 total challenges; you’ll have to get the book for the last two!)

Homophobia refers to the dislike of or prejudice against LGBT people. When an LGBT person grows up in the church, they usually encounter homophobia—feeling that they are disgusting in the eyes of the Christian God, because they have been treated this way by his people.

Evangelical leaders need to stand for truth. And putting homophobia to death is part of standing for truth. Jesus is truth, and Jesus is not adultererphobic, taxcollectorphobic, centurionphobic; and he is certainly not homophobic. Jesus does not have a prejudice against any human being. But if he did, it would be against judgmental, homophobic religious people.

We need to destroy homophobia. If someone tells a gay joke, kill it. Blurt out that line that will make everyone feel awkward, “That’s actually not very funny. Do you worship Jesus with that mouth?” If people want to talk about some issue about “those people over there”—stop it. Don’t let them. Stand up and be bold. Destroy homophobia. Don’t squirm in your silent agreement. Take a stand for truth. Take a stand for people. Kill homophobia.

Some people will think you are “pro-gay” if you stand up for gay people, and that’s fine. If people mistake your unconditional love for gay people as an affirmation of homosexual behavior, then don’t worry about it. You’re in good company. Religious people often thought that Jesus was a sinner because he had many friends who were sinners, yet he kept on befriending sinners. Don’t let religious pressure from your friends or family force you to cowardly embrace the pharisaic ethic of homophobia. Don’t buy the lie that if you love people too much, you must not care about sin. The gospel teaches us otherwise. Jesus cared so much about sin that he surrounded himself with sinners. Let us go and do likewise.
4. Educate others about the complexities of homosexuality

One of the best ways to kill homophobia is to educate people about the complexities and humanness of homosexuality. Whether it is in personal conversations, Bible studies, sermons, or any other venue where the subject of homosexuality is discussed, Christians need to resist quick and easy answers that perpetuate a simplistic view of a very complex issue.

Whenever I give a talk on homosexuality to evangelical Christians, I immediately sense that many people become uneasy, even angry, if I don’t begin by telling everyone where I “stand on the issue.” But I resist the pressure. I go into detail about what it is we’re even talking about. I try to humanize homosexuality so that we don’t just banter around about concepts, verses, and political debates about gay marriage. I make sure that we all understand the intricacies of homosexuality and the diversity of people’s experiences.

A posture based on truth delights in thinking deeply and critically about homosexuality. Such a posture believes that topics—or people—should be understood before they are evaluated. But a posture based on fear only wants assumptions to be reaffirmed. A fear posture doesn’t want to think or be challenged, but only wants to be reinforced and validated. This fear posture has hindered our gospel witness on homosexuality and has led to a very thin understanding of what it is we are even talking about. A truth posture, however, seeks to listen, to understand, to learn the other side, and to be corrected by God’s Word.

Nonaffirming Christians need to be eager to think and rethink what they assume they know about homosexuality. We need to come humbly before God’s authoritative Word and invite the Spirit to show us where we need to be more like Jesus—because with homosexuality, we haven’t been.

I met a guy a couple years ago who used to be a worship leader at a large church in California. We’ll call him Tom. At the height of a thriving ministry, he came out as gay and ended up leaving the church, finding a partner, and hasn’t been to church since. I recently had breakfast with Tom to hear his story and to see if there was anything the church could have done differently. He said something fascinating that I will never forget: “I never questioned my masculinity until I joined the church.”

Tom was not very athletic, he loved music and art, and he didn’t carry himself like most manly men in church. He didn’t hunt, fish, watch football, and he didn’t drive a muddy 4×4 truck. But Tom said that he never felt like less of a man until he became a member of a Christian church. “The church seemed to promote a particular view of masculinity that I didn’t fit into. I came to believe that I must not be a real man. Perhaps I am gay.”

I don’t want to rehash the whole nature-versus-nurture debate; I am not saying that the church made Tom gay by promoting a cultural view of masculinity. I am only saying that the church sometimes makes it tough for people to fit in, only because they don’t live up to an artificial standard of masculinity and femininity. Even if the church’s view of masculinity had no influence on Tom’s same-sex attraction, perhaps he could have worked through his same-sex attraction without feeling like he was too effeminate to be a Christian.

The church needs to promote biblical masculinity and femininity, and not American (or wherever you live) masculinity and femininity. When we try to cram people into synthetic gender roles that aren’t mandated by the Bible, we inevitably force them to question their gender or feel like they don’t belong in the church. Biblical men are those who resist retaliation, choose mercy over vengeance, and love their neighbors and their enemies. Whether you are an outdoorsman or an indoorsman, artsy or athletic, skinny or buff, a violinist or a quarterback, you are real man if you love Jesus and are a humble servant to all. Biblical women display wisdom in their decisions, radiate modesty in this oversexualized culture, and manifest strength against the challenges life throws their way. Most of all, a biblical woman is not incomplete without a husband, but fully radiates the powerful image of God in her singleness, widowhood, or infertility. Whether you are a homeschool mom or the CEO of a construction company, if you love Jesus then you can live out your femininity to its fullest potential.

We need to realize how artificial standards of gender can make people feel like they don’t belong.

December 14, 2015 What Does it Mean to “Become More Like Jesus?”
Recent Comments
0 | Leave a Comment
"I just want to point out to current readers that EBC is now fully accredited ..."
Shannon Tristal Why I Love Eternity Bible College
"I don't think God killed Jesus; but I am beginning to think someone killed Preston ..."
Caspian Did God Kill Jesus?
"I remember reading a book written in the late 1940s that claimed young people at ..."
ThoughtorTwo . Why Are Millennials Leaving the Church ..."
"First of all, this was from almost a year ago. Second, if Jesus is going ..."
Hilary Jesus Was a Jew: Understanding Jesus ..."
Browse Our Archives
get the latest from
Evangelical
Sign up for our newsletter
POPULAR AT PATHEOS Evangelical
1