A Dialogue on the Duration of Hell

As many of you know, I’ve been wrestling with the concept of hell for 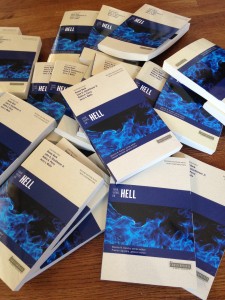 quite some time. It started back in 2011, when Francis Chan and I wrote Erasing Hell, which explored and defended the traditional view that hell is irreversible.

Since then, I’ve come to appreciate the exegetical nuances of the ultimate reconciliation view (aka “Universalism”), especially as it’s been presented by my friend Robin Parry. I’m still not convinced, but I no longer consider this view to be outside the bounds of orthodoxy. Certain forms of it, anyway.

While I remain convinced that the punishment in hell is irreversible—the main point of Erasing Hell—I do see more biblical evidence supporting the so-called annihilation (or terminal punishment) view of hell. That is, the punishment for sin is death. If you don’t trust in Christ’s death for your sin, you will suffer your own death in hell.

Some people ask me if I’ve changed my view since writing Erasing Hell. My short answer is “no.” Since Francis and I only devoted 2 pages to the duration of hell in our book, and since we leaned toward the traditional view of eternal conscious torment, any change that I’ve made has to do with less than 2% of the stuff we talked about in the book. Sometimes “change” is seen as a bad thing. But quite honestly, I hope that every theologian would change at least 2% of what they’ve written about in all their books. If they haven’t changed, I wonder if they’re still studying the topic.

In any case, I’ve served as the general editor for the new Four Views of Hell book that’s going to be released by Zondervan on March 8th, so I’ve spent the last couple years digging back into the topic. I’m still wrestling with what the Bible says about the duration of hell. If I can be honest, I’ve yet to see a compelling exegetical case for the traditional view. And I keep seeing many biblical passages that better support terminal punishment (my preferred title for annihilation). If I was an unbiased judge and presented with the evidence, I’d certainly declare the latter view to be innocent—indeed, biblical and righteous and Christian.

But I keep studying. I keep wrestling. I keep praying. I want to know and understand what God has revealed to us about his future judgment.

duration of hell on my blog over the next few weeks: Jerry Shepherd and Chris Date. Jerry will defend the traditional view of eternal conscious torment, while Chris Date will defend annihilation.

Both of these writers are fit for the task. Jerry is a professor of Old Testament at Taylor Seminary. He’s a brilliant thinker and a clear writer. I reached out to him because I’ve come to appreciate his meticulous attention to the biblical text, his scholarly pedigree, and his compassionate tone. Jerry seems to be that kind of dude who can shred you in an argument but make you feel loved and respected in the process. He’s clear, compassionate, thorough, and excessively biblical. I can’t wait to be convinced of his view!

Chris Date is a brilliant thinker and a passionate advocate for annihilation. Some of you may know his name thorough the Rethinking Hell website and podcast. Like Jerry, Chris is super thorough, extremely clear, and relentlessly exegetical. What I’ve appreciated most about Chris’s presentation of annihilation is that he doesn’t base his view on

sentimentality (“I can’t stomach the traditional view…”) or as some slip into liberalism (Chris is Reformed and believes in inerrancy). Rather, Chris believes in annihilation for one main reason: It’s biblical. Chris became convinced of annihilation—kicking and screaming, as he describes it—by studying the text of Scripture.

So here’s how this dialogue is going to go. First, Jerry will present a 1,500 word blog defending the traditional view (eternal conscious torment). Then Chris will do the same, defending annihilation. Then both authors will write a 1,000 word response to each others’ initial blog. Finally, each author will write a 500 word final response. Then—of course—I’ll write a blog (or maybe 2…or 3)—reflecting on the debate. Er…um…I mean dialogue.

For more information about the forthcoming “Four Views on Hell” book, check out the trailer video.

February 29, 2016 In Defense of the Eternal Conscious Torment View of Hell
Recent Comments
0 | Leave a Comment
"I just want to point out to current readers that EBC is now fully accredited ..."
Shannon Tristal Why I Love Eternity Bible College
"I don't think God killed Jesus; but I am beginning to think someone killed Preston ..."
Caspian Did God Kill Jesus?
"I remember reading a book written in the late 1940s that claimed young people at ..."
ThoughtorTwo . Why Are Millennials Leaving the Church ..."
"First of all, this was from almost a year ago. Second, if Jesus is going ..."
Hilary Jesus Was a Jew: Understanding Jesus ..."
Browse Our Archives
Related posts from Theology in the Raw