On Gun Control and Militarism

Gun control. If you ever want to spark a massive debate in your next Bible study, just 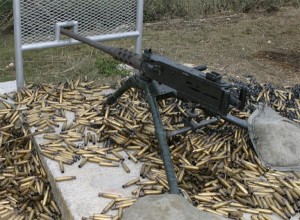 As an owner of several guns myself (a 12 gauge, 20 gauge, .270, and .22), I’d be a hypocrite to say that Christians shouldn’t own guns. But as a Bible believing follower of the Way, I’d be a fool to think that the question is purely a political one. And as an alien and stranger living in exile in America (1 Pet 2), I must take my ethical cues from the Creator’s commands, not manmade laws like the second amendment. The founding fathers are great and all. But they didn’t breathe stars into existence or walk out of a grave on the third day.

My concern with the debate about gun control has to do with the systemic values that nurture each side. We rightly mourn the horrific gun violence, yet we fail to recognize—or critique—the deep seated values that cultivate such wickedness. Values we celebrate on a national level yet scorn when they blow back in our faces on an individual level.

America is a militaristic nation. We posses the greatest military machine that history has every seen. We spend more money on military power than the next ten nations combined. We have enemies. Many enemies. And we will destroy our enemies. If you step on our toes, we will carpet bomb your village. No longer do we speak softly and carry a big stick. We speak boldly and carry 5,000 nuclear warheads.

We are not an enemy-loving nation. We are a nation that takes lip from no one. And if you live in a city with an Arab-sounding name (like Agrabah), then you better watch out. We might just call in the drones.

We are all too eager to overpower evil with violence.

But this nationalistic, militaristic, enemy-killing narrative must trickle down. Down to its citizen—even its Christian citizens. Military historian Andrew Bacevich reveals that the main catalyst behind America’s militaristic narrative has been none other than the evangelical church. “Were it not for the support offered by several tens of millions of evangelicals, militarism in this deeply and genuinely religious country becomes inconceivable.” Jerry Falwell Jr., the leader of the largest Christian institution in the history of the world, said we should arm ourselves to kill Muslims before they kill us. With jihadist undertones, pre-emptive violence has been rubber stamped as a Christian virtue. It’s no wonder that many evangelical Christians cling to the second amendment as if it were codified on Sinai.

If followers of a crucified Lamb are eager to pick up arms and annihilate their enemies, then we shouldn’t be surprised that citizens of Babylon are just as eager. (Sadly, in many cases, they’re not as eager.) And what’s encouraged on a national level must trickle down to an individual level.

Our nationalistic narrative says: the enemy must go. He must be destroyed. She must be annihilated. Yet—frighteningly—the concept of enemy is quite subjective: it’s whoever we don’t like. So we open fire on a whole crowd of enemies. Why not? After all, we’ll bomb whole cities if it’ll get one terrorist—even if they exist in a cartoon.

I believe that at least part of the horrific gun violence is rooted in values that are praised on a national level, yet condemned when they take root in the hearts of our citizens. But it’s inevitable that they will take root. Shoot us and we’ll bomb you. Bomb us and we’ll nuke you. Shame us and we’ll annihilate you. Mock me one more time at school and I’ll find you in crowd and kill you—and them.

These are the values that shape us. They seep into our bones from childhood; we hardly even notice their whispers.

Enter the marginalized kid who’s been teased to death for being socially awkward, overweight, underweight, or just not fitting in.

Enter the teenager who’s been beaten by his parents and his peers.

Enter the social invert whose bottled-up anger can’t be contained.

Step on my toes and I’ll bust your face. Hide out in a crowd, and I’ll burn down the village.

It’s tragic. It’s detestable. It’s a shameful evil that someone would open fire on a crowd and kill dozens of innocent people. But it’s inevitable. It’s inevitable that nationalistic values of retaliation, power, and violence toward our enemies will trickle down and nestle in the hearts of its citizens.

As long as we keep promoting a “we don’t take nothing from no one” narrative, we will have violence. Take away our guns. Fine. But we will still have vengeful, militaristic citizens who will destroy their perceived enemies at every will and whim.

February 23, 2016 A Dialogue on the Duration of Hell
Recent Comments
0 | Leave a Comment
"I just want to point out to current readers that EBC is now fully accredited ..."
Shannon Tristal Why I Love Eternity Bible College
"I don't think God killed Jesus; but I am beginning to think someone killed Preston ..."
Caspian Did God Kill Jesus?
"I remember reading a book written in the late 1940s that claimed young people at ..."
ThoughtorTwo . Why Are Millennials Leaving the Church ..."
"First of all, this was from almost a year ago. Second, if Jesus is going ..."
Hilary Jesus Was a Jew: Understanding Jesus ..."
Browse Our Archives
get the latest from
Evangelical
Sign up for our newsletter
POPULAR AT PATHEOS Evangelical
1